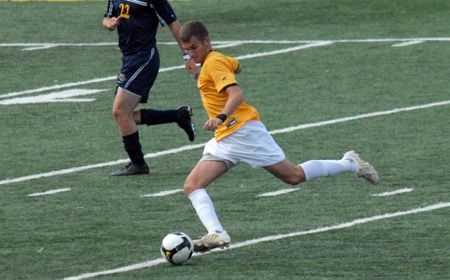 In front of a program-record crowd of 789 fans Sunday evening, Valparaiso took the lead late in the first half against #22/23 Michigan and held it for over 30 minutes, but a pair of Wolverine goals in a two-minute span midway through the second half were the difference, as Michigan came out on top by a 2-1 count.

“I want to thank the crowd for coming out to support the TOCO benefit game,” said Crusader head coach Mike Avery.  “We had a really good environment in Brown Field today, and hopefully that is the kind of thing we can continue to grow and make into an advantage for our program.”

The Crusader program teamed up with TOCO on Sunday to kick off its “Sneakers Not Wheelchairs” campaign to help target the diabetes crisis in St. Lucia.  A wrapup of the proceeds netted from the game will be available later, and the Crusaders will continue to accept donations all season long.

“I thought that we played hard and were very competitive today,” said Avery.  “It was not our best soccer of the year, but we certainly showed that we can compete with a team that’s a legitimate top-25 program.  I felt like in the first half, we were very aggressive and created a lot of goal-scoring chances.  But in the second half, it felt like Michigan turned up the heat on us, and I thought at the end of the day, it was a fair result because they were better in the second half.”

The Crusaders and Wolverines played to a pretty even first half, and the game looked like it might head into the break scoreless.  But in the 40th minute, Brendan Roth (Elkhart, Ind./Memorial) gained possession in his offensive end and tried to send a through ball towards the goal.  The ball was deflected by a Wolverine defender, but it ended up right at the feet of Zack Stivers (Brownsburg, Ind./Brownsburg), who found himself one-on-one with the Michigan netminder.  The keeper came out to try to cut down the angle, but the junior found the back of the net from about 15 yards out to put Valpo ahead 1-0.

The Crusader lead endured well into the second half despite multiple Michigan chances.  Valpo goalkeeper Ryan Schwarz (Rockford, Ill./Boylan Catholic) made a great save on a Michigan attempt into the match’s second hour to keep the Wolverines off the board, coming out of his net on a Michigan 2-on-1 and deflecting the shot attempt to the right of the goal mouth.

Michigan broke through with its first goal of the game in the 71st minute.  Hamoody Saad had possession for the Wolverines on the far side of the field deep into the 18-yard box and attempted a shot that was blocked by a member of the Crusader back line.  But the ricochet went directly to Mauro Fuzetti, who lined up a strike from 12 yards out to the left-hand side of the goal to knot up the match at one apiece.

Less than two minutes later, the Wolverines would tally the eventual match-winner.  Fuzetti found Justin Meram on the right-hand side with space to maneuver and just Schwarz to beat.  Schwarz came out of the net to again try to cut down the Angle, but Meram rattled the ball into the top-left corner of the net to make it 2-1 Michigan.  Valpo had a couple late opportunities for the equalizer, most notably inside the final two minutes on a very nice cross to the middle of the box by Steve Shively (Indianapolis, Ind./North Central), but the Crusaders could not get the ball on net.

Schwarz made five saves in net for the Crusaders, while his Michigan (2-1-0) counterpart, Chris Blais, made two stops for the win.  Nine different Valpo players accounted for its 12 shot attempts, led by three from Roth, while the Wolverines attempted 17 shots and held a 7-3 advantage in shots on goal.

“The great part about this game is that Michigan showed us a lot of things we still need to improve on,” said Avery.  “Because of our schedule, we don’t have much time to worry about tonight’s result, as we’ll be on a plane tomorrow morning to take on another very good side in USF.  So I hope our guys have a short memory and are mature and professional about tonight and use it to prepare for Tuesday’s game.”

Valparaiso (1-1-0) returns to the pitch in less than 48 hours, traveling down to Tampa, Fla. to take on its second ranked foe in three days, as #11/10 South Florida awaits the Brown and Gold.  Kickoff is slated for 6:30 p.m. CDT, and live stats will be available at www.valpoathletics.com.