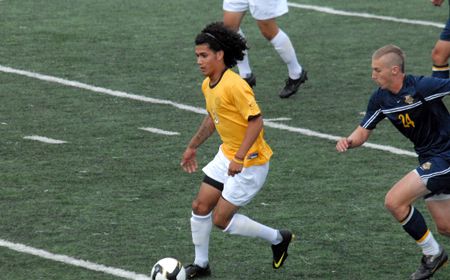 Playing its second ranked opponent in a three-day span after a 1,100-mile road trip, the Valparaiso men’s soccer team staved off any signs of tired legs and played right with #8/10 South Florida in Tampa Tuesday evening, sending the game to overtime scoreless before the Bulls broke through with a goal 43 seconds into the extra session to hand the Crusaders a 1-0 defeat.

“I’m just really proud of our guys’ performance tonight,” said Crusader head coach Mike Avery.  “We played a very tough game on Sunday against a top-25 team in Michigan, travelled all day yesterday down to Tampa, and came out tonight and played better than we did on Sunday, which is amazing considering the last 48 hours physically.  We played really well all around the field and were competitive the entire game, which is a credit to our guys when you’re playing the #8 team in the country on their home field.”

Crusader goalkeeper Ryan Schwarz (Rockford, Ill./Boylan Catholic) put up another stellar performance in net to keep the game scoreless through the first hour and a half, making seven saves, while Adrian Ortiz (Berwyn, Ill./Morton West) put a pair of shots on goal, including Valpo’s best scoring opportunity in the 19th minute on a shot from the top of the box that Bulls netminder Jeff Attinella made a nice save on.  Ortiz paced the Crusader offense with three shot attempts, while Rodolfo Lucas (Mogi Mirim, Brazil/ [Coffeyville C.C[) also attempted a pair of shots.

USF would eventually get the only scoring opportunity it would need in overtime within the first minute.  After a foul was called against the Crusaders, Javed Mohammed lined up a free kick and sent it close in on the left wing to Bernardo Anor, who found the back of the net for the night’s only marker.

USF was credited with a 15-7 shot advantage on the night, while Attinella made three saves for the shutout.  The Crusaders were relentless in pushing the ball into the Bulls’ defensive half and were rewarded for their efforts with ten corner kicks on the night, to just five for USF.

“We had lots of guys step on the field tonight for us, and everybody stepped right up and put in a great performance,” said Avery.  “We’re definitely disappointed that we lost, but this is a result that we can build on moving forward.”

Valparaiso (1-2-0) has a five-day break before its next game, a 4 p.m. meeting on Sunday with IUPUI at Brown Field.  The game will be broadcast live on WVUR, 95.1 FM, Valparaiso and online at www.valpoathletics.com, which will also have a link for live statistics.