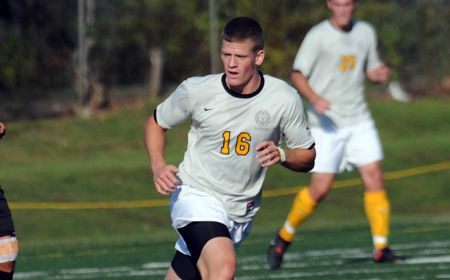 Senior forward Steve Shively (Indianapolis, Ind./North Central) recorded the second multi-goal game of his career, putting Valparaiso up 2-0 at the half, but Wright State responded with three unanswered tallies, including the match-winner less than two minutes into overtime, as the Crusaders fell to the Raiders 3-2 Sunday evening in Dayton, Ohio.

Shively, who entered the evening’s contest still looking for his first goal of the year, put the Crusaders on the scoreboard in the sixth minute.  The senior gained possession of the ball inside the box, played it off of a Wright State defender and beat Raider netminder Aaron Ritter from just off the goal line to put Valpo ahead 1-0.

The forward then picked up his second goal of the game in the 26th minute to give the Crusaders a two-goal edge.  Shively’s initial shot was saved by Ritter, but the rebound came right back to the senior, who beat Ritter from ten yards out for his second goal of the game.  It was Shively’s first multi-goal game since finding the back of the net twice against Western Michigan on Sept. 21, 2008.  The markers were the 14th and 15th of his career, leaving him just one tally shy of breaking into Valpo’s all-time top-ten in the category.

The Crusaders maintained their two-goal advantage until early in the second half, when in the 48th minute, Jason Kercher released a shot that Valpo goalkeeper Ryan Schwarz (Rockford, Ill./Boylan Catholic) saved.  But the rebound went to the Raiders’ Brad Bamberger, who found the back of the net to cut the lead to 2-1.

The score would remain the same throughout the next forty minutes, as Valpo closed in on what would have been its second league victory of the season.  But in the 88th minute, WSU reserve goalkeeper Corey Whisenhunt launched a kick deep downfield that Braden Fleak took control of and found the back of the net from eight yards out to tie the match and send it to overtime.  Then, just 88 seconds into overtime, Fleak found himself on a breakaway off a feed from Joe Flach and scored the golden goal to complete the Raiders’ comeback.

Valpo held a 10-7 advantage in the shots category over Wright State (2-6-1, 1-2-1 Horizon), but the Raiders put five shots on net to the Crusaders’ four.  Schwarz made two saves in goal for Valpo, while Whisenhunt had to stop just one shot over the final 55 minutes to earn the victory.

Valparaiso (4-5-1, 1-1-1 Horizon) will look to get back on track in the final game of a three-game road swing on Tuesday, as the Crusaders step out of league play to face Bowling Green.  Kickoff is slated for 2 p.m. CDT, and live stats will be available through www.valpoathletics.com.