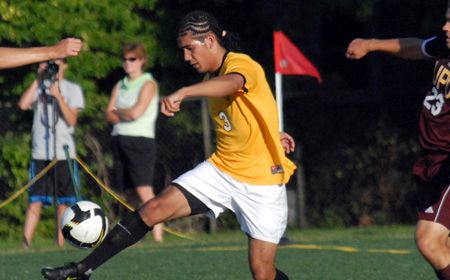 Junior midfielder Adrian Ortiz (Berwyn, Ill./Morton West) made the first two goals of his collegiate career count in a big way on Saturday afternoon, bringing Valparaiso back from a one-goal deficit in the second half as the Crusaders earned a 2-1 victory over Cleveland State at Brown Field.  With the win, the Crusaders finish the Horizon League campaign tied for third and will host a HL Championship quarterfinal matchup at Brown Field on Tuesday as the third seed.

“Obviously I am very pleased with our result today against a good Cleveland State team,” said Crusader head coach Mike Avery.   “I thought we played well, and I thought we made good decisions about when to play and build our possession or when to take a more direct route.  We did both effectively, and ultimately I felt that the win was one that was well earned.  Adrian was outstanding today.  His goals were timely and well taken, but even beyond the scoring I thought he controlled the midfield today in both the attack and in defense.”

The victory gives Valpo its ninth victory of the 2009 campaign, matching the most wins in a single season in Crusader history (1987).  The Crusaders also clinched their second season above .500 in program history, while their tie for third place in the league standings is Valpo’s highest league finish since placing third in the Mid-Continent Conference in 2002.

The first half of action Saturday was relatively calm, as while the two sides registered 14 total shot attempts in the opening 45 minutes, only two of those tries ended up on frame.  The action picked up in the second half, however, as ten of the teams’ combined 15 shots went on goal.  Both Crusader netminder Ryan Schwarz (Rockford, Ill./Boylan Catholic) and Viking goalkeeper Brad Stuver made saves early in the second stanza to keep the game scoreless.

Cleveland State would break through first in the 53rd minute of action.  Admir Suljevic had possession deep in the Viking offensive end near the right corner and found Anthony Baraldi on a run heading into the box.  Baraldi gained possession and let a shot go from about ten yards out that found its way inside the far post to give CSU a 1-0 lead.  The goal broke Schwarz’s scoreless streak in net at 351:50.

The Vikings had a prime opportunity in the 59th minute to extend their advantage to two goals, as Slavisa Ubiparipovic had a shot after Schwarz was drawn out of position.  But while Ubiparipovic placed his shot on frame, Crusader defender Rodolfo Lucas (Mogi Mirim, Brazil/ [Coffeyville C.C.]) was in perfect position on the back line to clear the attempt and keep it a one-goal game.

Valpo eventually made its first dent on the scoreboard in the 66th minute.  Lucas played a long ball about 40 yards down the center of the field to just outside the penalty area, where Kevin Miller (Jefferson City, Mo./Helias) used his chest to re-direct the ball ahead and to the left.  The re-direction found its way right to the foot of Ortiz, who beat Harpel from eight yards out to knot up the game.

Less than five minutes later, it was again Ortiz giving the Crusaders the match-winner.  Roby Del Giudice (Toronto, Ont./Robert F. Hall [Wallace State C.C.]) had the ball just outside the area on the right side, and when he was double-teamed, flicked a perfect touch to Clayton Lyons (Louisville, Ky./Trinity) down in the corner.  Lyons sent a cross all the way across the box, where Ortiz gathered it in and found the far post for his second goal of the game.

Valparaiso ended the contest with an 18-11 advantage in shot attempts over Cleveland State (7-7-4, 4-2-2 Horizon), and placed eight shots on goal to the Vikings’ five.  Schwarz made four saves in net in the winning effort, while Harpel made six stops.

“Though there was lot at stake today in terms of playoff implications, today was ultimately about our seniors,” said Avery.  “Each of the four have been tremendous representatives of our program, and they have led us through some tough times to one of the greatest season in the program's history.  I am proud of them, and am thankful for all that they have done for our program.  We're now hopeful we can keep the season alive for a good while longer.”

Valparaiso (9-6-2, 4-2-2) will enter the Horizon League Championship on a five-game unbeaten streak.  The third-seeded Crusaders will officially find out their first-round opponent and game time Tuesday at Brown Field when the league releases its bracket later this weekend following the completion of regular season action.

“We compensated with the absence of Steve today with a "striker by committee" that was led by Zack Stivers, and I thought all the guys battled hard and created some very good chances in both halves of the game,” said Avery.  “We are excited to host a Horizon League tournament game and know that we will have our work cut out for us against a talented Milwaukee team.  Our game a few weeks ago could have really gone either way, and we know that they present us with a tough challenge.”