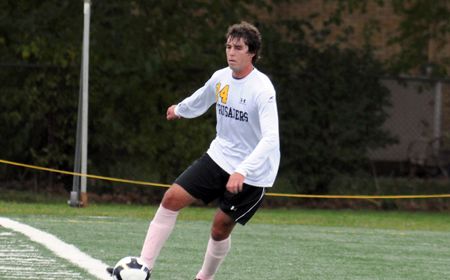 The Valparaiso men’s soccer team saw the best season in program history come to an end on Friday in Indianapolis, Ind., as the third-seeded Crusaders lost to second-seeded Green Bay, 3-1, in Horizon League Championship semifinal action.

The 2009 Crusader side ended the season with a 10-7-2 overall record, breaking the previous program record for victories (9, 1987) and also becoming the first squad since 1987 to finish above .500.  This year’s team also posted Valpo’s highest regular season league finish since 2002 and was just the second team in program history to earn a victory in postseason play.  Individually, goalkeeper Ryan Schwarz (Rockford, Ill./Boylan Catholic) set new program single-season records for shutouts (7) and goals against average (1.07).

“Congratulations to Green Bay, they were certainly the better team on the field today and earned their victory, and good luck to them in the final,” said Crusader head coach Mike Avery.  “On our end, it wasn’t our best performance today, a lot of which was due to Green Bay’s play.  But I’m super proud of our guys for what we’ve accomplished all season, battling all year long.  We kept battling even late in the game today and were able to pull one goal back.  That attitude has been a trademark of our team all season long and will be what gets us back to the tournament next year and hopefully advance further along.”

Green Bay got on the board early in the match in the 13th minute, when Scott Raymonds sent a cross from the left wing into the box that David Znaty put a head on and re-directed into the back of the net from four yards out.  Raymonds added a header goal of his own in the 74th minute, scoring from eight yards after a David Prochazka free kick.

The Phoenix pushed in a third goal in the 77th minute, as JC Banks found Dan Krueger with a long lead pass that Krueger shot from 18 yards out on the left side to the far corner of the goal.  The Crusaders would cut the deficit back down to two goals just 82 seconds later, as senior Danny Jeftich (Valparaiso, Ind./Valparaiso [IUPUI]) connected on a free kick from 25 yards out to the right corner of the net for his first career marker, but Valpo could not get any closer.

Green Bay (14-2-2) ended the match with a 13-8 advantage in shot attempts and put six of its tries on frame to just one for Valpo.  Schwarz made three stops in goal for the Crusaders.

Friday’s match was the final in the careers of four Crusader seniors: Jeftich, J.J. Del Castillo (Queretaro, Mexico/Seaholm [Gardner-Webb]), Rodolfo Lucas (Mogi Mirim, Brazil/ [Coffeyville C.C.]) and Steve Shively (Indianapolis, Ind./North Central).  The quartet, who were all big components of Valpo’s transition into the Horizon League, all were on the pitch at the end of Friday’s match.  Shively closes his career tied for sixth in Valpo history with 18 career goals and tied for eighth with 41 career points.

“I just have to give special thanks to our seniors,” said Avery.  “They have done a great job leading us through the greatest season in program history, no small accomplishment considering the level of play in this league.  All four of them have been integral parts of our program’s growth and will be missed.”