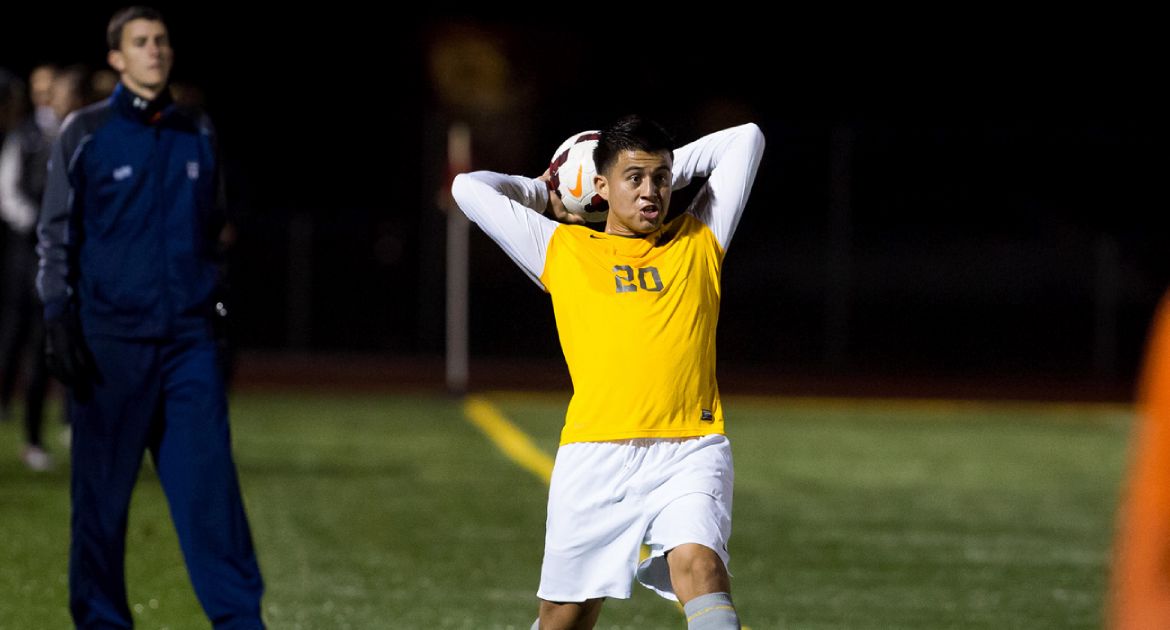 The Crusaders battled to a 0-0 draw through 110 minutes before falling in penalty kicks
Valparaiso at Cleveland State | November 10, 2014

The Valparaiso men’s soccer team fell to Cleveland State in penalty kicks on Monday night, 4-3, in the first round of the Horizon League Championships.   The Crusaders and Vikings had played to a 0-0 draw through 110 minutes before entering penalties.

“It's certainly tough to go out in penalty kicks, especially when it felt like we were the team really pushing to win the game through the last 30 minutes plus overtime,” said Crusader head coach Mike Avery. “But, you have to credit Cleveland State for hanging on, playing a good game, and advancing.”

Sophomore goalkeeper Nico Campbell (Kingston, Jamaica/St. George's College) made a pair of big saves in the first five rounds of penalties, as the extra session was tied at two apiece and went to sudden death.  Sophomore forward Suleiman Thomas (Chicago, Ill./Lake Forest Academy) put the Crusaders up 3-2 in the sixth round before the Vikings tied it up after the shot from Christian Arboleda pounded off the left post and into the back of the net.

Senior midfielder Nick Suker (Downers Grove, Ill./South) stepped up to the line next and went left, as the previous four Crusaders had done, but his shot was stopped by Nick Ciraldo. Kevin Blackwood then sent his effort into the back of the net to the right of Campbell, as he dove left,  and Valpo’s season came to a close.

“It wasn't the prettiest penalty kick session for either team, which speaks to the pressure of the moment and how badly these kids from both teams put into their sport,” Avery said. “We trained all week for this possibility, but nothing replicates all that those moments mean. I have a ton of respect for the guys that stepped up to shoot, and my heart breaks for them because I know they feel they let the team down – the truth is, though, that they didn't. We are all very proud of our brothers and we win or lose together. Always together.

Junior midfielder Jordan Aidoud (Lyon, France/CEFAM) had a golden opportunity in the 94th minute, but his shot hit the cross bar.  The rebound was picked up by senior captain Zev Taublieb (Malibu, Calif./Agoura), who sent a shot wide.

In the 107th minute Aidoud had another opportunity with a free kick from 22 yards out, but his shot sailed high. Freshman midfielder Ramone Howell (Portmore, Jamaica/Jamaica College) had a quality chance inside the box just a minute later as he snuck behind the defense, but his header went right of the goal.

“There were long spells of the game where we were tremendous - organized behind the ball, and dangerous in possession - and we created enough chances to score a few goals,” Avery said. “To be denied by the crossbar and then have a few clear chances go wide is frustrating, but at the end of the day scoring goals is the name of the game. We were close, but just off the mark.”

The match was hotly contested by both sides, with six yellow cards being called in a very physical and emotional game. The Crusaders had three shots on goal and 12 shots overall, while only giving up nine shots overall and four on goal.

The Crusaders' defense, as it had all season, made several key stops to keep the game scoreless. Campbell made a diving save to his right in the 57th minute after a corner kick was nearly run to perfection.

With 15 seconds to go in regulation, a Valpo foul gave the Vikings a last-second chance with a free kick from 40 yards out, but was headed away upon entering the 18-yard box.

Campbell made four saves en route to his sixth shutout of the year and second one against the Vikings.

“It's been a great season and this team, led by a stellar senior class, has left its mark,” Avery said. “There have been big wins, national rankings and recognition, records for fewest losses in program history as an example. There is plenty to be proud of and plenty to build off. Valpo Soccer is in a great place and the future is very, very bright.”