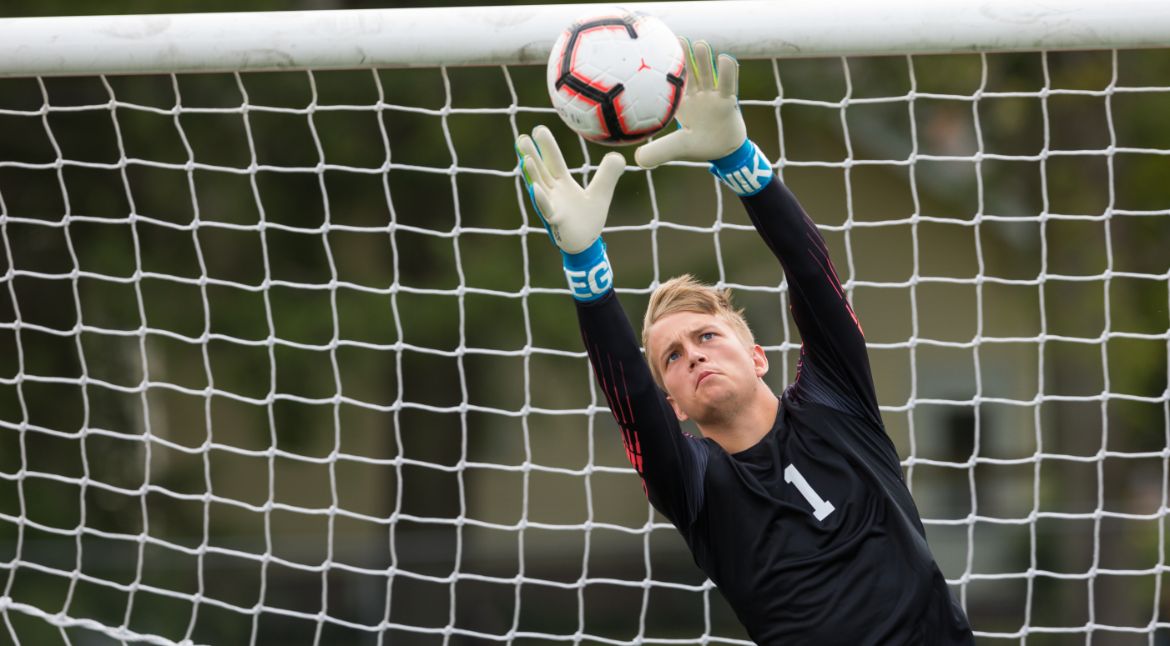 Jorn-Jan van de Beld got the start in goal on Saturday.
Valparaiso at SIUE | October 05, 2019

A stretch of five consecutive road fixtures for the Valparaiso University men’s soccer team began on Saturday night with a 3-0 setback to SIUE in Edwardsville, Ill. Jorn-Jan van de Beld (Balkrug, The Netherlands / University of Twente) received the start at the goalkeeper spot and notched six saves. Valpo played well in spurts and controlled considerable possession on a night where the final score was not fully indicative of what transpired.

“It was a bit of a funny game for us tonight because there were very long stretches where we played quite well. We possessed and were able to move the ball against a very well organized SIUE team, but the score line looks lopsided. The stats show we had more of the possession and were in their half more than they were in ours, but the game is won and lost in the penalty boxes. We have not been good enough defending our goal or attacking their goal yet this year.”

“It’s a process with an inexperienced team that can sometimes be a long and painful process, but we simply have to clean up individually in the critical moments.”

“We had two individual errors in the first 15 minutes, they capitalized and the whole complexion of the game changed. Even going into halftime, we felt we could climb back into the game, but we knew it would be a fight for the game’s third goal. They got their goal off a set piece and it was game over at that point.”

“I’m still convinced it will come for this group and the attitude of the team hasn’t shown any signs of falling off track. They’re frustrated, and they should be, but as long as they channel that in the right way, things will turn in their favor.”

“There were some bright spots: Joe Kouadio was terrific. Lucas Oliveira and Mason Marcey were very good. Michael Cushing brought tremendous energy. Adan Garcia and Demar Rose were good. These are all things we can build on, and we will spend every minute this week available preparing for Loyola first and then the second half of league play.”

Valpo (2-7-1) will return to Missouri Valley Conference action on Saturday, Oct. 12 for a 7 p.m. kickoff against Loyola in Rogers Park. The game will be broadcast on ESPN3.