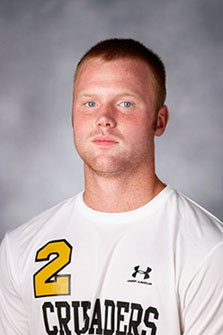 Full Roster
Related Links
2007: Started all 17 matches he appeared in as a junior, missing only final match of the season ... had appeared in all 52 of Valpo’s matches during his career until missing Wright State match on Nov.9, including 42 straight starts ... led backfield which allowed just 28 goals in 18 matches, third-fewest in a single season in program history ... tallied third assist of his career on game-tying goal late in the first half at Western Illinois Sept. 21 ... named to the Horizon League Academic Honor Roll during both fall and spring semesters ... played for ELA Elite club during the summer and helped team win the USASA U-23 national championship.

2006: Started all 17 matches for Valpo as a sophomore ... one of just four Crusaders to start every match ... named team’s Outstanding Defensive Player ... anchored a Valpo backline that shut out five opponents on the season ... first career assist came on match-winning goal Sept. 2 at UC-Davis ... also recorded an assist Sept. 10 against Buffalo ... notched first career goal at Northwestern Oct. 4 ... fired two shots, both on goal, Oct. 8 at IPFW.

2005: Appeared in all 18 matches, making 15 starts ... named team’s Defensive Most Valuable Player ... one of five Crusaders to play in all 18 matches, and one of only three to make at least 15 starts ... a major part of Crusader defense that set Division I school records for shutouts (6) and goals allowed (29) ... drew starting assignments in first five matches of career ... one of only two Crusaders to earn Mid-Con Player of the Week honors, picking up the defensive award Oct. 24 after shutting down the league’s leading scorer and helping the Crusaders to a 0-0 (2ot) draw with Western Illinois ... fired a career-high two shots Sept.11 against Northern Illinois ... started final eight matches of the year.