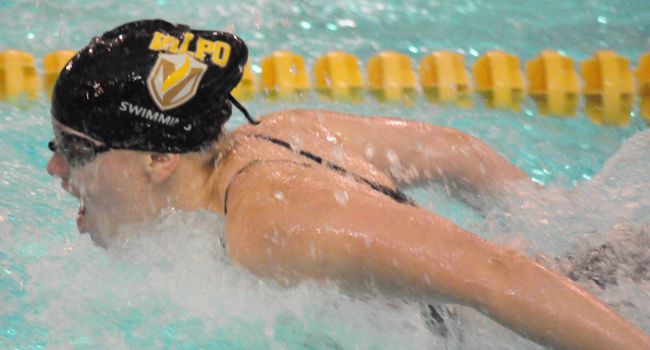 It was a different day, but similar results for the Valpo swimming teams.

Junior Andrea Bretl (Wauwatosa, Wis./West HS) took first place in the 1000-yard freestyle with a time of 11:08.84, a little more than 9 seconds ahead of Butler's Elizabeth Miller.

Senior Justine Barnes (Rochester Hills, Mich./Adams HS) finished in second place in the 200-yard butterfly, touching the wall at 2:22.75 in her final race at the ARC.

The men had a few first place finishes in their dual against Olivet Nazarene.

Freshman Frederick Jenny (New Albany, Ohio/New Albany HS) hit the wall a solid 3 seconds ahead of the competition in the 200-yard freestyle.

Fellow freshman Gonzalo Castro Diaz (Mexico City, Mexico) grabbed his second 200-yard individual medley win in as many days with a time of 1:59.35.

For an encore, Castro Diaz showed off his endurance in the 500-yard freestyle with a 9.29 second finish ahead of Sam Borgman.

Not to be outdone, Jenny responded in dramatic fashion with a victory over Calvin Price in the 200-yard breaststroke by two-hundredths of a second.

The men's and women's swimming teams will have much of the rest of February to prepare for the Horizon League Championships in Chicago. The tournament will be held for both teams on Wednesday, February 27th.