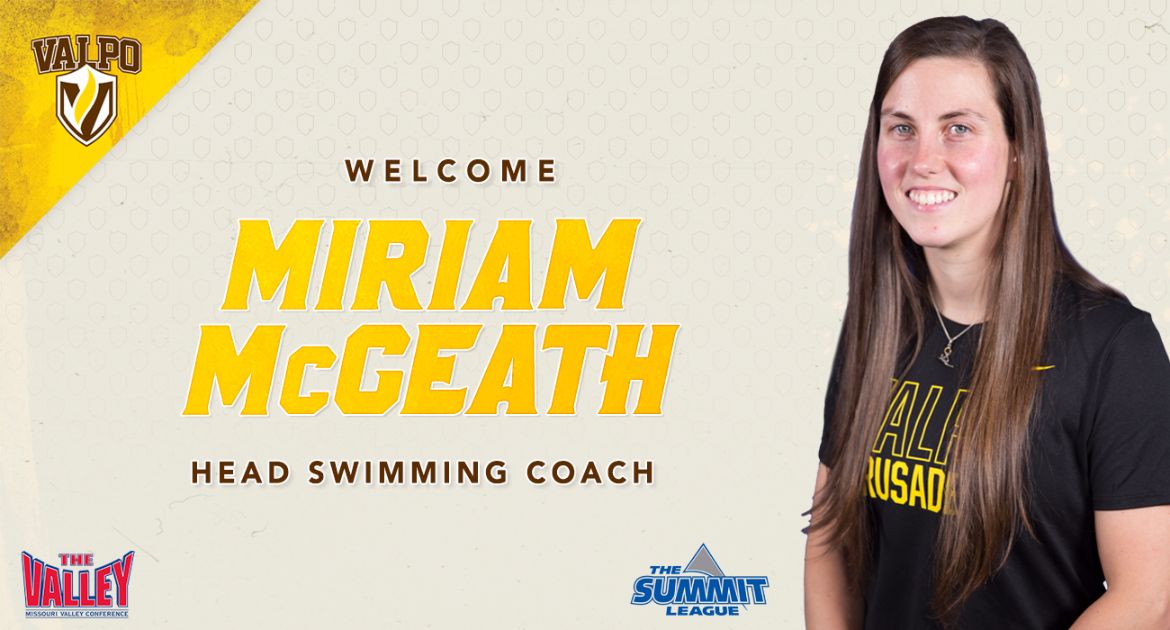 Valparaiso University Director of Athletics Mark LaBarbera has announced the hiring of Miriam McGeath as the head coach of the Crusader men’s and women’s swim programs, effective Dec. 4.

McGeath comes to Valpo after spending the last two seasons as the primary assistant at Duquesne, where she was responsible for overseeing the distance and mid-distance training groups. The Dukes finished as the runner-up in the 11-team Atlantic 10 Conference in each of McGeath’s seasons on staff.

“I am beyond thrilled about the opportunity to serve as a head coach for both men’s and women’s teams at the Division I level,” she said. “There is a lot of excitement surrounding Valpo swimming at this time as both of our teams enter new conferences. It’s a great time to join the program and I will strive to uphold that excitement moving forward.”

Before beginning her coaching career, McGeath enjoyed a successful tenure in the pool as a member of the Duquesne team. She was a two-time Atlantic 10 champion in the 400 individual medley, made NCAA B cuts in the 400 IM and 200 breaststroke and shattered six school records – the 200 fly, 200 IM, 400 IM, 100 breast, 200 breast and 400 medley relay.

“We are excited to have a highly successful student-athlete and coach at one of the top swim programs in the Atlantic 10 assume the leadership of our swim programs,” LaBarbera said. “Coach McGeath’s passion for swimming and commitment to quality experience for student-athletes was clear during our conversations. We are pleased to welcome her to the Valpo Athletics family.”

In addition, McGeath was a 12-time individual Atlantic 10 conference finalist and was named a mid-major All-American. She was a member of the Director of Athletics honor roll, dean’s list and the Atlantic 10 Commissioner’s Honor Roll while earning a bachelor of science in athletic training. After finishing her undergraduate studies in May 2014, McGeath completed her master of science in sports business from Duquesne in August 2017.

McGeath will be joined on staff by assistant coach Andrea Bretl, who is in her third season and has served as the interim head coach since August.

The Crusaders will take part in the Carthage Classic in Kenosha, Wis. from Nov. 30 – Dec. 2, then will have some time away from meet competition before McGeath’s first meet as head coach, a dual with Lewis on Jan. 13 at the Athletics-Recreation Center. The Valpo women are in their first season in the Missouri Valley Conference, while the Crusader men are in their first season as Summit League affiliate members.