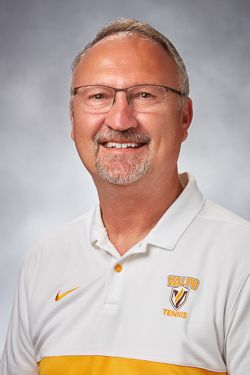 Jim Daugherty was named the head men’s tennis coach at Valparaiso University in the fall of 1985 and has remained at the helm of the program ever since. He completed his 35th and final year in charge of Valpo men’s tennis in 2019-2020.

Daugherty led his team to yet another successful season during the 2018-2019 campaign. In the classroom, Valpo received the NCAA Public Recognition Award for outstanding academic performance. On the courts, Daugherty’s squad once again qualified for the Summit League Tournament while turning in its fifth winning season in a six-year span. The program finished with a 14-5 record and .737 winning percentage including a 4-2 Summit League mark, which represented the team’s fifth consecutive year with a winning league record.

Perhaps the biggest accomplish of the 2018-2019 campaign came courtesy of Ancona, who took home the Summit League Player of the Year Award. After racking up three Summit League Player of the Week distinctions, the junior received the league’s highest honor at the postseason awards banquet. That marked the fourth time in five years Daugherty coached a league Player of the Year. In addition, Kenyatte joined Ancona on the All-Summit Team, marking the sixth consecutive year Valpo had at least one player earn first-team all-conference honors and the fourth time in five years multiple players were recognized.

Daugherty guided his team to the league championship match in four consecutive seasons from 2015-2018. To cap that run, Daugherty led his squad to the Summit League final in its first season as an affiliate member. Valpo rallied to edge four-time defending champion Denver 4-3 in the 2018 Summit League semifinal, wrapping a season that saw numerous individuals achieve success under Daugherty’s direction. Chad Kissell was named an all-league performer for the third straight year, Kweisi Kenyatte had a strong freshman season that saw him lead the team with 20 singles wins and Garrett Gardner graduated after finishing his accomplished career with 74 singles wins and 67 doubles victories, both of which ranked fifth in program history.

The 2017 team finished with a 23-4 mark and went a perfect 7-0 against Horizon League opponents. Valpo faced No. 17 Michigan in the first round of the NCAA Tournament. Although the team fell 4-0, Jeffrey Schorsch and Charlie Emhardt became the first players in program history to win a doubles match in the team portion of the NCAA Tournament. After finishing as the ITA National Indoor doubles runners-up in the fall, Schorsch and Emhardt reached the Elite Eight of the NCAA Doubles Tournament in the spring, becoming the first All-Americans in program history. The duo fell in a three-set thriller to the No. 1 doubles team in the nation. Over the course of the season, they knocked off three doubles teams ranked in the Top 10 nationally and finished the year at No. 21 in the ITA National Doubles Rankings. Schorsch captured Horizon League Player of the Year honors for the third straight season in 2017, becoming the first player in league history to win the award outright three years in a row.

The 2016 edition of the team netted 22 wins, amending the previous program watermark. For the second straight year, Jeffrey Schorsch was named Horizon League Player of the Year under Daugherty’s direction. In addition to capturing the first league title since Valpo became a member of the Horizon League, the Brown and Gold made a strong showing at the NCAA Regionals in Evanston before dropping a 4-1 result to the 14th-ranked Northwestern Wildcats. The one point ended a 22-year streak where Horizon League teams were shutout in the NCAA Tournament.

Daugherty led Valpo to a 21-7 record in 2015, two more wins than the school record set the season prior. The 2015 squad finished second in the Horizon League during the regular season and claimed runner-up honors at the Horizon League Championship. He coached six players to over 20 singles wins including Jeffrey Schorsch, who was set the single-season record for singles victories with 28. On the doubles side, Daugherty helped five players to 20 or more doubles wins with two sophomores breaking the single-season record for wins with 30.

Seven different Valpo players earned Horizon League Player of the Week honors in 2015. During the fall, three players earned entries into the main draw of singles play in the ITA Regionals. Furthermore, two teams also gained entries into the ITA Regionals doubles play, where one team advanced to the semifinals and the other made it to the Round of 16.

Valpo recorded a 19-9 record in 2014, breaking the old school mark for wins in a season by seven. That squad advanced to the semifinals of the Horizon League Championship after not qualifying for the league tournament in any of the previous four seasons. Daugherty led Jeffrey Schorsch to Horizon League Freshman of the Year honors, coached a First Team All-League honoree in Dave Bacalla and a Second Team All-League performer in Charlie Emhardt. Five players were named Horizon League Players of the Week in 2014.

Eric Honert broke the school record for career wins (69) while on Daugherty’s watch in the fall of 2013. During the 2012-13 campaign, Daugherty coached two Horizon League Players of the Week and a Second Team All-League recipient.

In 2008, Daugherty helped guide the Brown and Gold into its inaugural season in the Horizon League, where the Crusaders finished in fifth place. A year later in 2009, his squad finished in a tie for fourth in the league during the regular season, Valpo’s first top half finish since joining the league.

During his tenure at Valpo, he coached 36 All Mid-Continent Conference selections, including the conference Player of the Year honorees in 1998, 2002 and 2006.

Daugherty was also the head women’s coach at Valparaiso from 1985-1995 while simultaneously coaching the men’s program.

Daugherty played collegiate tennis at Ball State University from 1974-1977, where he played consistently at the top of the lineup in both singles and doubles. Daugherty captained the team during both his junior and senior season with the Cardinals. He earned his B.S. degree in business administration from Ball State in 1977 and his M.S. degree in sport management from the U.S. Sports Academy in 1993.

In addition to coaching, Daugherty has been teaching in Valpo’s physical education department for over 25 years. Jim and his wife Cathy reside in Valparaiso.