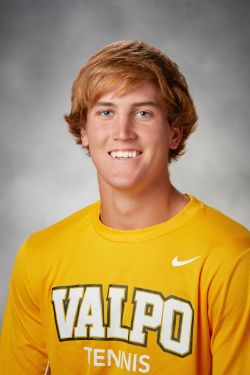 2017-18: Recognized as an All-Summit League selection after going 17-14 in singles and 19-11 in doubles play, becoming a three-time all-league honoree… Assumed the No. 1 singles position as a junior… With a full season still to come, finished his junior year already eighth in program history in career singles wins with 65 and seventh in career doubles wins with 61. Through his first three seasons, his career singles winning percentage of .650 and doubles winning percentage of .701 both rank fourth in program history… Was named the Summit League Player of the Week on April 3 after helping the Crusaders to a 7-0 win over Oral Roberts…Rebounded from a lopsided Set 1 loss for an 0-6, 6-3, 6-4 win at No. 1 singles in the Summit League semifinal against defending league champion Denver on April 27 to give Valpo a 3-1 lead in an eventual 4-3 victory. He also helped the Crusaders to the doubles point with a win at No. 2, a key contribution in a victory that sent Valpo to its fourth consecutive league championship match… Won 6-3, 6-1 at first singles in the Summit League championship, accounting for Valpo’s lone victory in a 4-1 loss to Drake.

2016-17: Started at No. 2 singles for a team that won the Horizon League regular season and tournament titles, set the school record for wins with 23 and appeared in the NCAA Tournament... Went 21-12 overall and 5-1 in the Horizon League in singles play... Posted a 24-5 record and 5-0 league mark in doubles competition... After going 7-3 during the fall season, was the No. 95 ranked singles player in the nation in the ITA Preseason Rankings... Defeated Cleveland State's Colton Buffington 7-5, 6-1 at No. 2 in the Horizon League Championship match on April 30, a 4-3 victory over Cleveland State... Competed in the NCAA Tournament match against Michigan on May 12, falling to Alex Knight 6-2, 6-2... His 24 doubles victories ranked ninth in program history for doubles wins in a single season, while his .828 doubles winning percentage ranked fourth all-time... Enters his junior season with a .696 career singles winning percentage, second in program history behind only Jeffrey Schorsch (.804) and a .737 doubles winning percentage, fourth in program history... Named to the all-league first team follow his sophomore campaign.

2015-16: Emerged on the collegiate scene and went 27-9 in singles and 18-10 in doubles en route to both Horizon League Freshman of the Year honors and First Team recognition ... played primarily at No. 3, but also competed in seven matches at No. 2 ... was a perfect 6-0 in HL singles and 5-0 in doubles ... went 2-1 at the Milwaukee Tennis Classic (Sept. 18-20), defeating Marquette's Alvaro Verdu and Ball State's Conner Andersen ... also won two of three singles matches at the Vredevelt Invite in Kalamazoo, knocking off Xavier's Jeremy Schneider and Green Bay's Howard Scott, both in straight sets ... downed Wisconsin's Jakhongir Jalalov 4-6, 6-1, 6-4 in consolation action at the ITA Midwest Pre-Qualifying Tournament in Tulsa ... collected victories over representatives from Toledo, Western Michigan and Notre Dame to earn a spot in the main draw of the ITA Midwest Regionals on Oct. 25 ... opened the spring with a convincing 6-1, 6-0 triumph versus Toledo's Omar Espinosa ... beat Western Michigan's Matej Svjetlicic 6-4, 6-3 on Jan. 31 to help propel the Crusaders to a 5-2 win ... registered wins on both ends of a Feb. 6 doubleheader versus Butler and IUPUI ... ended the regular season by tallying straight-set victories in 15 of his final 16 decisions, including a 6-0 run through league play .... supplied Valpo with the match-clinching point at No. 2 singles by virtue of his 6-3, 6-3 result versus Cleveland State's Mirko Radosevic in the semifinals of the Horizon League Championship ... took two of three doubles matches at the Milwaukee Tennis Classic alongside Kyle Dunn ... persevered for a 7-6 (2) victory over Green Bay's Joey Leto/Florian Kraenzler at the Vredevelt Invite on Sept. 25 ... won four consecutive doubles matches to open the spring, including wins versus Toledo (Jan. 23), at Wisconsin (Jan. 30) and at Butler (Feb. 6) ... bounced back from a pair of losses to No. 46 Louisville and No. 68 Purdue with a five-match winning streak ... followed up their 5-0 run through league play with a 6-3 defeat of Cleveland State's Mirko Radosevic/Benjamin Slade in the semifinals of the Horizon League Championship on April 30.