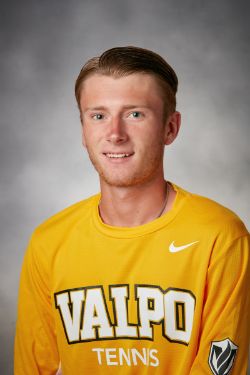 2016-17: Member of a team that won the Horizon League regular season and tournament titles, set the school record for wins with 23 and appeared in the NCAA Tournament... Went 17-6 overall in singles and turned in a 20-6 doubles mark... Put together a perfect 5-0 doubles record in league play... Enters his senior season ranked seventh in program history in career singles wins with 58, the most among active Crusaders... Holds a career singles winning percentage of .667, fifth in program history and a career doubles winning percentage of .650, fifth in program history... Enters his senior year also ranked in the career Top 10 in doubles wins with 52, which is ninth... Helped Valpo nail down the doubles point in both Horizon League Tournament matches, 4-3 wins over Youngstown State (April 29) and Cleveland State (April 30) as he and Kyle Dunn earned victories at No. 3 doubles... Competed in the NCAA Tournament match against Michigan on May 12, as he and Dunn fell 6-3 to Myles Schalet and Kevin Wong.

2015-16: Went 19-12 in singles, between No. 4 and 5, primarily, and 14-10 in doubles, mainly at No. 2 ... amassed a 4-2 mark in Horizon League singles play and a 3-0 HL record in doubles action ... rattled off a 2-1 record at the Valpo Fall Invitational, scoring wins over DePaul's Conor O'Meara and Cleveland State's Andre Mick ... rebounded from a 3-6 fall to boast a 16-6 spring ... enjoyed a seven-match winning streak from Feb. 6-March 4, a string that included straight-set victories over Michael Quang of No. 46 Louisville and Arthur Dobradin of No. 68 Purdue ... got past George Mason's Giuliano Buzoianu and Richmond's James Aronson in straight sets during the Crusaders' spring trip ... defeated Green Bay's Charlie Ridout 3-6, 6-2, 6-1 at No. 5 to clinch the Horizon League Championship title match over the Phoenix on May 1 ... knocked off Cleveland State's Joe VanMeter and Andre Mick in the opening round of the ITA Midwest Regionals on Oct. 22... embarked on a five-match winning streak from Feb. 19-March 19, pairing with Dave Bacalla, Lucas Waak and Charlie Emhardt for triumphs ... teamed up with Bacalla to clinch the doubles point at No. 2 versus Green Bay's Howard Scott/Joey Leto in the finals of the Horizon League Championship on May 1st.

2014-15: Racked up 22 singles wins and 18 doubles victories in his first season with the Brown and Gold ... recorded a team-best 13-match winning streak - 12 of which were straight-set triumphs - in singles play from Sept. 20-Feb. 7th ... in that time, the rookie handed losses to Cleveland State's Jorg van der Vloet, Green Bay's Marius Merz and Michael Tebon and Toledo's Garrett Cona ... went 4-1 on the team's spring break trip to Orlando, notching wins versus Coe College (March 7), St. Thomas Aquinas (March 7), Quinnipiac (March 9) and Lehigh (March 11) ... registered a three-set win over Wright State's Jose Pestana on March 28 by a score of 6-1, 3-6, 6-1 ... handed Detroit's Rafael Orantes a 6-4, 7-5 loss (April 10) ... was a game away from clinching a victory against Cleveland State's Manuel Bellutti in the semifinals of the Horizon League Championship (April 25) before the Crusaders clinched the match ... went 3-0 in doubles play in the Valparaiso Fall Invitational (Oct. 3-4) alongside Brian Hickey ... kickstarted a sic-match winning streak that lasted until Feb. 8 at No. 26 Northwestern ... teamed up with Lucas Waak to defeat Green Bay's Leo Gomez Islinger/Michael Tebon, 6-1, on April 4 ... closed out the regular season with a 6-1 triumph at Youngstown State (April 19) ... recorded a 6-2 victory over Cleveland State's van der Vloet and Joe VanMeter in the semifinals of the Horizon League Championship (April 25).

Prep: Four-star recruit as ranked by tennisrecruiting.net ... was 90-9 in singles play during his high school career, having played at No. 1 since his sophomore year ... ranked No. 6 in the state of Ohio and No. 136 in the nation ... was named the 2013 and 2014 Tennis Athlete of the Year by The Vindicator ... qualified for the Ohio State Boys D2 Tennis State Tournament in 2011 in doubles and in 2013 and 2014 in singles, placing fourth his senior year and earning first team all-state honors.