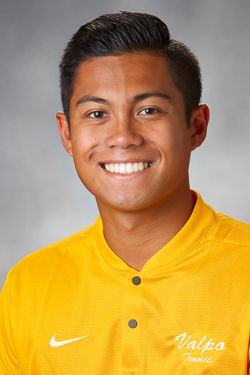 After helping Valpo set the program record for victories in each of his four seasons as a student-athlete, Dave Bacalla made the tradition from player to assistant coach in 2017-18.

Bacalla finished his senior season with a 19-13 overall record and 12-8 dual mark to go along with a 21-6 doubles record. An all-league second-team honoree his freshman year and a first-team selection as a sophomore, Bacalla finished with 82 career singles wins and 75 doubles victories, both ranking in the top four in program history.

Bacalla was one of four members of the Valpo men’s tennis Class of 2017, the most accomplished graduating class in program history. He helped guide the Crusaders to NCAA Tournament appearances in both his junior and senior seasons.

In his first season on the coaching staff, Bacalla helped guide the Crusaders to their fourth straight appearance in the league championship match, this time in the Summit League after he helped Valpo reached three straight Horizon League finals (winning two of them) as a player.