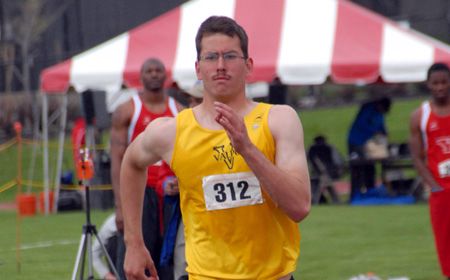 Sophomore Steve Schubert (Lisle, Ill./Benet Academy) won the triple jump Saturday to lead the Valparaiso men’s track and field squad as it competed at the Boilermaker Invitational in West Lafayette, Ind. in its final tuneup for the Horizon League Indoor Championships.

Schubert improved from his first leap all the way through his final leap on Saturday, culminating in a final jump of 41’9 ¾” for the event victory.  The sophomore set a new career best in the event as well with his final leap, surpassing the mark he set last week.

Nick Babbitt (Milwaukee, Wis./Nicolet) moved into fifth place on Valpo’s all-time list in the weight throw on Saturday as well, registering a toss of 49’5 ¾” for a sixth-place finish in the event.  Babbitt was just two inches shy of the fourth-best mark in Crusader history in the event.

On the track, a pair of Crusaders recorded fourth-place finishes on Saturday.  Freshman Vince Liuzzo (Jamestown, N.Y./Jamestown) placed fourth in the 60m dash with a time of 7.36 seconds, while senior Tom Heun (Brecksville, Ohio/Brecksville-Broadview Heights) finished fourth in both the 60m hurdles, crossing the line in 8.66 seconds, and the 200m dash, setting a season-best time of 23.85 seconds.

The Crusaders return to the track next weekend at the Horizon League Indoor Championships on Feb. 28 and March 1, being contested this year in Greencastle, Ind.  Both days of competition begin at 8 a.m. CST.