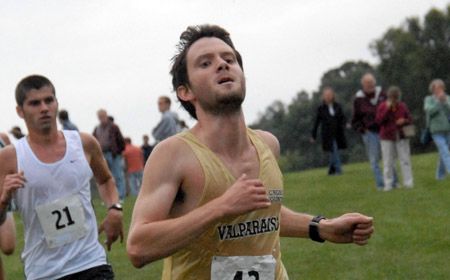 Keith Button was one of four Crusaders named to the indoor track and field Academic All-League team. (Ray Acevedo)

Button, a sophomore who carries a 3.671 cumulative GPA as a mechanical engineering major, was among the Crusaders’ fastest middle-distance runners throughout the indoor campaign and led Valpo at the Indoor Championships in the mile run.  He has earned Dean’s List recognition and Presidential academic honors during his time at Valpo, and was a member of the Horizon League Academic Honor Roll for the fall 2008 semester.

Mathwig, a junior who carries a 3.764 cumulative GPA as a geography major, posted Valpo’s fastest 800m time during the indoor season (2:04.92) and also ranked among the team’s top milers.  He has received Horizon League Academic Honor Roll notice each of Valpo’s three semesters in the league and has been awarded Valpo Presidential academic honors.

Schubert, a sophomore who carries a 3.862 cumulative GPA as a civil engineering major, posted a top-ten finish at the Indoor Championships in the triple jump after winning the event earlier in the season at Purdue’s Boilermaker Invitational.  He has earned Dean’s List recognition as well as Presidential academic honors at Valpo and was named to the fall 2008 Horizon League Academic Honor Roll.

Stohs, a junior who carries a 3.851 cumulative GPA as a history major, posted a pair of top-ten finishes in the throws at the Indoor Championships.  His best effort in the shot put of 41’2 ½” led the Crusaders during the indoor campaign.  Stohs, who was previously a member of the 2008 outdoor track and field Academic All-League squad, has been named to the league’s Academic Honor Roll each of the last three semesters.  He has earned Dean’s List recognition, as well as Presidential academic honors, during his time at Valpo, where he is enrolled in Christ College, Valpo’s honors college.