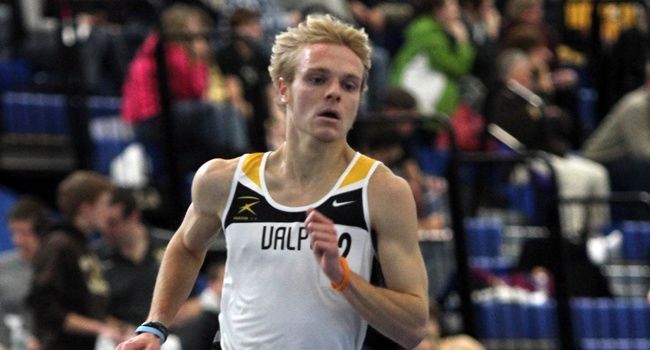 Wally Bradford finished second with a time among Valpo's all-time top-five in the mile on Saturday. (Derek Schnake)
Related Links

After Friday saw two Crusaders move up the program’s all-time charts in their respective events, Saturday saw three different Valparaiso men’s track and field athletes and a relay post top-five marks in program history as the Crusaders closed out action at the GVSU Big Meet in Allendale, Mich.

The Crusaders had a number of athletes experience successful days on the track Saturday.  Junior Wally Bradford (Mukwonago, Wis./Mukwonago) ran to a runner-up finish in the one mile run with a time of 4:15.77, the fourth-best time in Valpo history.  In the sprints, freshman Nick Kowaleski (Lockbourne, Ohio/Grove City) crossed the line in 22.33 seconds in the 200m dash, good for fourth place and the third-best effort all-time at Valpo in the event.  Kowaleski registered another top-ten finish as well in the 60m dash, coming home in seventh place with a time of 7.10 seconds.

Valpo’s 4x400m relay also had a standout day on Saturday.  The four-man squad of sophomore Joe Holy (Bolingbrook, Ill./Joliet Catholic), freshman Kevin Adamik (Elmhurst, Ill./York Community), sophomore Mickey Delcambre (Westfield, Ind./Westfield) and sophomore Julian Smith (Chicago, Ill./Brother Rice) combined for a time of 3:24.23 over the 4x400m to finish in tenth place.  The time was the second-quickest in program history and was the fastest time in the event in 37 years.

Smith capped off a tremendous weekend with a winning effort in the long jump, showcasing his versatility with a leap of 21’4 ¾” to win the event by one-half inch.  Senior Chris Hovan (Elkhart, Ind./Elkhart Christian) also posted a top-ten in the jumps, placing ninth in the triple jump with a leap of 40’9 ½”.  In the throws, the Rixon brothers registered solid performances in the weight throw, as senior Bill Rixon (Deerfield, Ill./Deerfield) improved upon his fifth-best mark in Valpo history with a toss of 53’1 ½” to finish in 13th place.  Junior Andrew Rixon (Deerfield, Ill./Deerfield) wasn’t far behind his brother, finishing in 17th place with a mark of 51’6 ½”.

Valparaiso has its final tuneup for the 2012 Horizon League Indoor Championships next weekend, as the Crusaders make the short trip to Purdue to compete at the Boilermaker Invitational on Saturday, Feb. 18.  Action is slated to start at 10 a.m. CST.