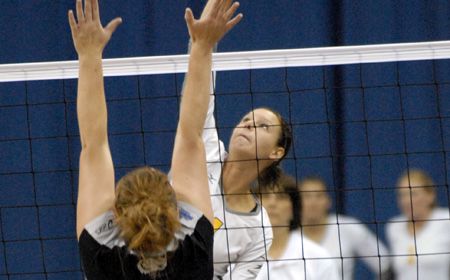 The first two sets against the Islanders were both back-and-forth affairs, as the first frame saw 16 ties and six lead changes, while the second contained ten ties and four lead changes.  Valpo never found itself trailing by more than one point in the opening set, but TAMU-CC wouldn’t let the Crusaders post any sort of cushion either, as the two squads tied at every point from 7-7 through 22-22.  Finally, following an Islander attack error, Haley Wise (Mishawaka, Ind./Mishawaka) posted a service ace to give Valpo a pair of set points, and an Islander error gave the Crusaders the opener.

The second set saw TAMU-CC get out to a three-point edge at 9-6 before Valpo reeled off eight of the next ten points on the strength of six Islander errors and a pair of kills from Katie Britton (Mishawaka, Ind./Marian) to take a three-point lead of its own.  The Islanders rallied back to tie the frame at 18 apiece, but that was their last gasp in the frame, as the Crusaders ended the set with an offensive flurry in a 7-1 run to go into the break up two sets.  Amy Groesbeck (Wheaton, Ill./North) registered a pair of kills during the set-ending spurt, while Britton, Kim Bukowski (Waukesha, Wis./West) and Angie Porché (Lynwood, Ill./Thornton Fractional South) each picked up a termination.

Texas A&M-Corpus Christi held the lead the entire third set, and while two kills by Katie Layman (LaPorte, Ind./New Prairie) sandwiched one by Groesbeck in a three-point spurt to bring Valpo back to within 22-21, the Islanders scored three of the final four points to send the match to a fourth set.  But the final frame was controlled by the Crusaders, especially following a run keyed by Jenny Pokorny (Geneva, Ill./Geneva), who picked up two assists, a kill and a solo block during a 5-0 run that put Valpo ahead 14-9.  Later in the set, with Valpo up 18-14, Porché recorded a kill to give the Crusaders the serve and Taylor Root (Jenison, Mich./Jenison) took advantage, picking up a pair of aces during her serving run to help cinch the match for Valpo.

Three Crusaders reached double figures in kills, led by Britton, who picked up 16 kills, reaching a new career-best for the second straight match.  Porché added 14 kills on .393 hitting and also posted 12 digs for a double-double, while Groesbeck also set a new career best with 12 kills.

In addition, Bukowski set a new career high in the kills category, putting down seven balls on just 12 attacks.  The senior setter also handed out 43 assists as the Crusader offense swung at a .281 clip for the match.  Defensively, Root tied for team-high honors along with Porché with 12 digs, while Valpo registered five blocks as a squad, including four of the solo variety.

“It was good just to get back on the court after last weekend, and I thought we played really well,” said Crusader head coach Carin Avery.  “Texas A&M-Corpus Christi handled the ball well and had two good outside hitters, but by the end of the match, we were able to contain them.  We made some really good adjustments as the match went on.”

Emma Ridley led all players with 22 kills for Texas A&M-Corpus Christi (3-2), while Jessica Korda chipped in 14 kills.  Kandyce Nelson led the Islanders on the back line with 16 digs.

The evening match was not as kind to the Crusaders, as they hit just .058 on the match to Drake’s .231 clip as the host Bulldogs came out with the sweep.  In the first set, Valpo rallied back from a 16-12 deficit to take a lead late in the set, but Drake scored five of the final six points of the frame to take the lead.  The Bulldogs held a slim lead for most of the second set before pulling away by scoring seven of the last 11 points, and got out to a 15-3 lead in the third en route to the sweep.

No Crusader reached double figures in kills against Drake, as Porché’s nine terminations paced Valpo, marking the first time since midway through her sophomore year that the senior has failed to reach double figures in the category.  Root tied for match-high honors with 12 digs.  Emily Heffernen registered nine kills and was in on eight blocks for Drake (4-2).

“Drake did a very good job of taking us out of our comfort zone,” said Avery.  “They knew we came in as an outside-dominant team, with over half our points coming on the outside, and they were great at taking that away from us.  We didn’t do a good job adapting; we needed to find different ways to score pts, but weren’t able to do that.  On the bright side, our serve receive was pretty good all match, but now we need to focus on our attacking and blocking, which need to improve in order for us to win matches.”

Valparaiso (1-3) closes out play in Des Moines with a pair of matches tomorrow.  The Crusaders will face South Dakota at 11 a.m. and conclude with Centenary at 3 p.m.  All the action can be heard live on WVUR, 95.1 FM, Valparaiso and online at www.valpoathletics.com.