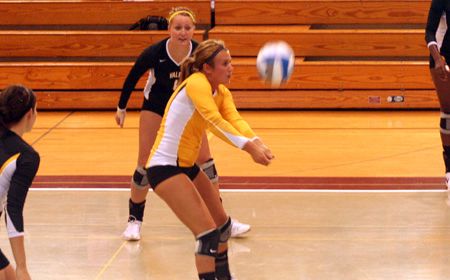 Valparaiso began play Friday afternoon at the Saluki Invitational on a high note, rolling over its momentum from last weekend in a 3-0 sweep (25-14, 25-16, 25-17) of Murray State in Carbondale, Ill.

“It was nice to see some of the little things we worked on this week in practice really show in the match tonight,” said Crusader head coach Carin Avery.  “We stressed that we needed to serve a lot better, and I thought we did for sure tonight.  We also talked about a few things with our blocking and worked on it a bit, and that looked better tonight as well.”

Murray State kept the opening set tight for a brief period, as the Racers were still within three points at 10-7.  But Valpo took advantage of four MSU errors, along with kills by Katie Britton (Mishawaka, Ind./Marian) and Katie Layman (LaPorte, Ind./New Prairie), to go on a 6-1 run and pull ahead by eight points at 16-8.  The lead remained at a comfortable margin the rest of the way, and a kill by Tara Diebler (Indianapolis, Ind./Franklin Central) followed by an Angie Porché (Lynwood, Ill./Thornton Fractional South) service ace closed a 4-0 spurt to finish off the opener.

The second frame was not close for nearly as long, as Valpo reeled off the first five points of the set on the strength of a kill by Diebler, a service ace by Andrea Balsis (Benton Harbor, Mich./Coloma), a solo block by Porché and two MSU errors.  The Racers scored the next three points, but the Crusaders responded with another 4-0 spurt on a pair of Diebler aces to go with kills from Porché and Jenny Pokorny (Geneva, Ill./Geneva) to take a six-point edge.  Murray State closed back to within three at 12-9 later in the set, but Britton recorded three of Valpo’s four kills in a 4-1 spurt that pushed the lead back to six, a deficit which MSU could not overcome.

The final set was the most contested of the three, as Murray State held a lead as late as 12-10.  But a kill by Amy Groesbeck (Wheaton, Ill./North) sparked a huge Crusader run, as a Racer attack error and a Porché kill forced a timeout by MSU.  Out of the stoppage, Layman and Porché combined on a rejection, and a Racer kill merely served to briefly quell the Crusader momentum.  Porché registered another termination, and libero Taylor Root (Jenison, Mich./Jenison) stepped back to the service line and served five straight points, capped by an ace to end a 10-1 run that gave the Crusaders control for good.  The teams would side out eight straight points before freshman Mary Dent (Long Grove, Ill./Von Steuben) ended the match with a kill.

Valparaiso hit at a stellar .374 clip for the match, as four of its five primary hitters swung at better than a .300 percentage.  Groesbeck led the way with a match-best 12 kills on .500 hitting, while Porché chipped in 11 terminations while hitting a .320 clip.  Britton and Layman each tallied seven kills apiece on 13 swings.  Setter Kim Bukowski (Waukesha, Wis./West) led all players with 30 assists.

“This was really the first match all year that we’ve eliminated a lot of our errors offensively and we kept the pressure on our opponent throughout,” said Avery.  “Our setters did a really good job mixing up the offense and keeping it running at a high level.”

On the defensive side of the ball, the Crusaders out-dug Murray State (0-7) 47-35, thanks in large part to 17 digs by Root.  Valpo also registered five blocks and seven service aces on the match, led by two rejections and three aces from Diebler.

Valparaiso (4-3) concludes play at the Saluki Invitational with a pair of matches on Saturday.  The Crusaders will take on UAB at 10 a.m. before facing off with host Southern Illinois in the tournament finale at 7 p.m.  Both matches can be heard live on WVUR, 95.1 FM, Valparaiso and online at www.valpoathletics.com, which will also have links for live stats for both matches.