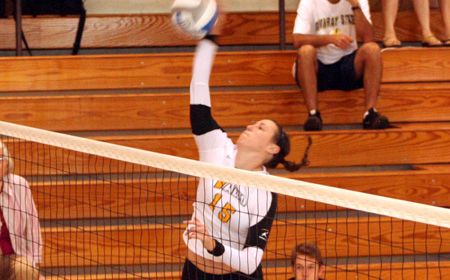 “It was great to get league play underway, and especially to start off with a win,” said Crusader head coach Carin Avery.  “It can be tough to get road wins in the Horizon League, so anytime you end up winning on the road, it’s a good win for the team.”

The Crusaders have now won 24 consecutive sets in Horizon League regular season action, dating back to the second set against Milwaukee on October 24 of last season.  Valpo utilized a tremendous advantage on the offensive side of the ball for the sweep on Friday, outkilling the Penguins 49-28, led by a 19-kill performance on .455 hitting by sophomore right side Amy Groesbeck (Wheaton, Ill./North) and 11 kills on .556 hitting from junior middle hitter Tara Diebler (Indianapolis, Ind./Franklin Central).

“Amy just had a special night tonight,” said Avery.  “It was one of those nights where she was on, not just in the front row attacking and blocking, but also in the back serving and digging.  She really put together an all-around phenomenal match.”

Groesbeck registered an amazing 11 kills alone in the opening set, and Valpo would need every one of them to stave off the homestanding Penguins.  YSU opened the match strong out of the gate, taking an early 5-1 lead and holding the advantage most of the frame.  The Penguins held a 17-15 lead later in the set before Groesbeck registered three kills and combined on a block with Katie Layman (LaPorte, Ind./New Prairie) during a 4-0 spurt to put the Crusaders ahead 19-17.

Youngstown State came right back with three straight points to re-gain the lead at 20-19, but Groesbeck would be the catalyst for a set-ending run, bringing Valpo back into a tie for the lead with a kill.  Angie Porché (Lynwood, Ill./Thornton Fractional South) then came up with a kill of her own and Groesbeck followed with another termination to push the lead to two points.  Back-to-back Penguin errors put the Crusaders in position to win the opening frame, and fittingly it would be Groesbeck who ended the rally on Valpo’s second set point opportunity with a kill.

Valparaiso led start to finish in the second set, taking advantage of a set-opening 8-2 run on the back of two kills by Layman, along with terminations by Katie Britton (Mishawaka, Ind./Marian), Diebler and Groesbeck.  The Penguins never got closer than two points the remainder of the set, and when they pulled back within four points late in the set at 18-14, Layman and Porché picked up kills followed by an Andrea Balsis (Benton Harbor, Mich./Coloma) service ace to secure the set victory for the Crusaders.

YSU led briefly in the final set, but a quick three-point spurt on a Britton kill, Balsis service ace and a Penguin error gave the Crusaders a lead they would not relinquish at 6-4.  Valpo slowly extended its lead out to 20-12 before Youngstown State put together three straight points to gain some momentum and cut the Crusader edge to five points.  But after a Valpo timeout, it came right back and scored the final five points, getting a kill and service ace from Groesbeck during the match-ending run, while Diebler picked up both the penultimate and clinching points on kills.

Kim Bukowski (Waukesha, Wis./West) set up the Crusader offense all night long, handing out 42 assists on the evening as Valpo hit .310 as a team, the second time this season it has hit at better than a .300 clip.  On the defensive side of the ball, Taylor Root (Jenison, Mich./Jenison) led all players with 17 digs, while Balsis far and away surpassed her previous career best in the category, picking up 16 digs to go with a pair of service aces.

“We really did a good job with our block setup tonight,” said Avery.  “Our blockers were in good position all night long, and that allowed us to get Taylor and Ann on the receiving end of a lot of digs to help transition easily into our offense.”

Valparaiso (6-4, 1-0 Horizon) heads an hour further east on Saturday, traveling to Pittsburgh, Pa. to take part in the Pitt Blue and Gold Tournament.  The Crusaders will take on Maryland-Eastern Shore at noon CDT before facing the host Panthers at 4 p.m.  Both matches will be broadcast live on WVUR, 95.1 FM, Valparaiso and online at www.valpoathletics.com, which will also have links for live stats for both matches.