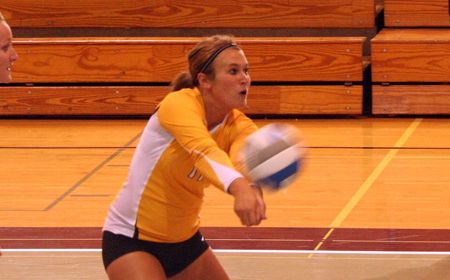 Valparaiso was unable to slow down the Cleveland State attack in action Saturday night at the Athletics-Recreation Center, as the visiting Vikings came away with a 3-0 (25-20, 25-13, 25-17) victory over the Crusaders.

While the Crusaders never held an outright lead in the opening set, it would be the frame they had the best chance of winning.  After trailing by four points early at 7-3, Valpo fought back and would eventually tie the score at 12, 13 and 14.  The Vikings would extend the lead back out to three points, but the Crusaders came back and closed to within one at 19-18 on a setter dump by Kim Bukowski (Waukesha, Wis./West).  CSU responded with four of the next five points, however, to take control of the opener.

A quick 3-0 spurt by the Vikings erased an early Valpo lead in the second set, and the Crusaders would never be able to regain the advantage.  Back-to-back kills mid-frame by Tara Diebler (Indianapolis, Ind./Franklin Central) and Angie Porché (Lynwood, Ill./Thornton Fractional South) seemed to give the Crusaders momentum as they cut the deficit to 12-9, but CSU scored the next seven points to go into the in-game break up two sets.

Cleveland State controlled the entire final set as well, as the Crusaders fell behind 7-3 early and then found themselves on the wrong end of a 11-1 run to give the Vikings a 22-8 lead.  Valpo would put together a rally, scoring nine of the next 11 points thanks in large part to five kills by freshman Mary Dent (Long Grove, Ill./Von Steuben), but the deficit would be too much to overcome as CSU closed out the match on its fourth opportunity.

Valparaiso only trailed in the kills category by a 38-34 margin, but the Crusaders were victimized by 25 attack errors in contrast to only ten such errors by Cleveland State (12-5, 2-1 Horizon).  Porché paced the Valpo offense with nine kills, while Bukowski handed out 24 assists.  Taylor Root (Jenison, Mich./Jenison) led all players with 13 digs.

Valparaiso (8-6, 2-1 Horizon) returns to action next Friday night at the ARC in its only contest of the week, hosting the league’s lone remaining unbeaten team and rival Butler.  First serve is set for 7 p.m., and all the action can be heard live on WVUR, 95.1 FM, Valparaiso and seen online on the Horizon League Network.  Links for both the audio and video will be available through www.valpoathletics.com, which will also have a link for live stats.