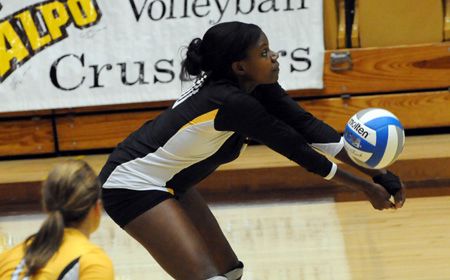 Valparaiso won the key points at the end of all three sets Friday evening at the Athletics-Recreation Center, enabling the Crusaders to sweep Butler (25-21, 25-20, 25-23) to move into a tie for first place in the Horizon League standings.

“After last Saturday’s match, we really had a nice talk as a team about communication and effort and how we needed to do a better job at both,” said Crusader head coach Carin Avery.  “We talked about how, even when things aren’t going your way, good communication and effort can help you get back into a set or match, and we really did a good job with both tonight.  Even though we trailed in all three sets, we maintained our poise and kept communicating and were able to come out with the sweep.”

Valpo got out to a slow start in the first set, as Butler, which entered Friday’s match as the lone unbeaten team in Horizon League play, scored four of the match’s first five points.  The Crusaders still trailed at 7-4 before a quarter of Bulldog errors helped spur a 7-2 Valpo run.  Katie Britton (Mishawaka, Ind./Marian) and Tara Diebler (Indianapolis, Ind./Franklin Central) each registered kills during the run, while Angie Porché (Lynwood, Ill./Thornton Fractional South) tallied a service ace during the spurt that put the Crusaders on top, 11-9.  Valpo would never even fall into a tie for the remainder of the set, as Jenny Pokorny (Geneva, Ill./Geneva) eventually closed the opener with a kill.

The Crusaders again got out of the gates slowly in the second frame, falling behind 5-1 right away.  The Bulldog advantage was still 13-10 before Valpo put together a 6-1 run to earn the lead for the first time in the set.  Porché posted a pair of terminations during the run, while Kim Bukowski (Waukesha, Wis./West) and Katie Layman (LaPorte, Ind./New Prairie) each added kills as well.  A solo block by Amy Groesbeck (Wheaton, Ill./North) capped the Crusader rally, putting Valpo in front 16-14.

Butler would never regain the advantage outright, but did fight back to tie the frame at each point from 16-16 to 19-19.  But the latter score was just a precursor to another 6-1 run, this one to send Valpo into the in-game break up two sets to none.  Diebler started the run with a kill, followed by a Bulldog error to make it a two-point lead at 21-19.  Out of a timeout, Butler  picked up a termination, but Porché then took over, recording kills on three straight points to give the Crusaders four set opportunities.  Valpo would need just one, as again it was Pokorny who ended the set with a kill.

For the third straight set, the Crusaders started slowly, as Butler found itself ahead 8-3 early on.  While the five-point edge represented the Bulldogs’ largest lead of the set, they would stay ahead of Valpo for almost the entire frame.  The Crusaders looked for their first tie of the set after a kill by Groesbeck brought them to within 16-15, but Butler scored three of the next four points, forcing a Valpo timeout.

Out of the stoppage, Butler committed an attack error followed by another kill by Porché to bring the Crusaders back to within one at 19-18.  The teams traded sideouts for the next three rotations, with a Bulldog service error cutting the Valpo deficit to one at 22-21.  Groesbeck then came up with a big kill, giving the Crusaders their first tie of the set.  Out of a timeout, Butler recorded a kill to move within two points of extending the match, but Britton stepped up with back-to-back kills, the latter giving Valpo its first outright lead of the set and a match point opportunity.  Bukowski needed no help to cinch the match for the Crusaders, sending over a service ace to close out the sweep.

The Valpo attack was running at high octane throughout the match, as the Crusaders closed the match with 53 kills on .365 hitting as a team, never hitting below .281 in any single set.  Porché paced Valpo with 16 kills, swinging at a .400 clip on the night, and also added 11 digs for a double-double.  Britton added ten kills on .381 hitting, while Groesbeck hit .500 with nine kills and Diebler chipped in eight kills of her own.  Bukowski handed out 27 assists on the night, while Pokorny dished out 21 helpers.

Taylor Root (Jenison, Mich./Jenison) led the Crusaders on the back line again, picking up 16 digs on the night as Valpo outdug Butler (12-8, 3-1 Horizon) by a 55-43 margin.  The freshman libero has paced Valpo in the category in every match in 2009 and has now led all players in digs in each of the last five matches.  Diebler set a season high with seven digs of her own, while Haley Wise (Mishawaka, Ind./Mishawaka) chipped in seven digs as well.

“I thought we did a very nice job all around tonight,” said Avery.  “We really focused on defense and serving, and we did a much better job in both areas.  While we didn’t get many blocks, we got a lot of touches at the net that made for easy transition to offense.  We also did a very good job serving and taking Butler out of system more often than we were out of system.”

The Bulldogs were led offensively by Jessica Wolfe, who put down 13 kills without an attack error.  Porshia Allen added 12 kills and a team-best 15 digs, while Maureen Bamiro led all players with four blocks.

Valparaiso (9-6, 3-1 Horizon) begins a busy week of volleyball on Tuesday evening as the Crusader homestand rolls on with Green Bay at the ARC.  First serve is set for 7 p.m., and all the action can be heard live on WVUR, 95.1 FM, Valparaiso and seen online on the Horizon League Network.  Links for both the audio and video will be available through www.valpoathletics.com, which will also have a link for live stats.