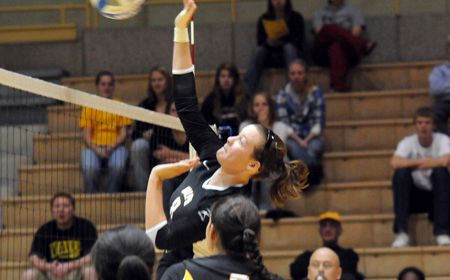 In a Halloween-night special Saturday evening at the Athletics-Recreation Center, Valparaiso gave its home fans a giant treat to take home, rallying from a two-set deficit for a 3-2 (24-26, 18-25, 25-22, 25-21, 15-6) victory over Oakland.  Jenny Pokorny (Geneva, Ill./Geneva) picked up her first career triple-double in the win, while the Crusaders hit .306 as a team, their best effort in a five-set match since Halloween night 11 years ago.

Pokorny became the first Valpo player since Katie Bova in 2005 to register a triple-double in a single match, picking up 12 assists, 12 digs and ten kills.  Even more impressive was the fact she recorded her ten kills on just 21 swings without committing any attack errors, good for a .476 hitting percentage.  The sophomore also registered four blocks as well to complement her performances in the other categories.

“Jenny was just outstanding tonight, easily the best match of her career here so far,” said Crusader head coach Carin Avery.  “Anytime you register a triple double, it’s a special night because its such a rare feat, and then on top of it she had a great night attacking as well, hitting at such a high percentage without making any errors.”

The Crusaders knocked down 73 kills on the night on just 173 total attacks, good for their .306 hitting clip.  The .306 mark for a five-set match is the best Valpo has done in a five-setter since rally scoring was implemented prior to the 2001 season, and is the second-best clip all-time in a five-set match, only trailing a .311 mark against UMKC, fittingly enough also on Halloween in 1998.

The Crusader offense was running on all cylinders in the opening set, as Valpo hit .385 with 20 kills in the opening frame.  But the Golden Grizzlies came ready to play as well, hitting .341 with 17 kills themselves for the opener.  Valpo rallied back from a six-point deficit at 19-13, picking up seven of the next nine points to cut the Oakland lead to one, thanks in large part to three kills by Angie Porché (Lynwood, Ill./Thornton Fractional South) during the stretch.

Oakland would not let the Crusaders get a share of the lead, keeping them at bay until earning a set point opportunity at 24-22.  An attack error cut the advantage to one point, and then Porché followed with a big kill to forge the set’s first tie since 5-5.  But Oakland’s Meghan Bray answered with a termination of her own to give the Grizzlies a third chance at the set, and an attack error gave the frame to Oakland.

The second set was not nearly as dramatic, as after an early 3-2 Crusader lead, Oakland rattled off ten of the next 13 points to take control at 12-6.  Valpo would cut the deficit to just four points twice from that time, the latest coming at 19-15, but four straight points by the Grizzlies sent them into intermission ahead two sets to none.

“You have to give a lot of credit to Oakland in those first two sets, as they just came out and played some spectacular volleyball,” said Avery.  “They were playing very well, and I also thought we made them look even better in those two sets, because our blocking and defense weren’t where we needed them to be.”

The third set saw the Crusaders for the first time take the early advantage and hold on to it, as Valpo maintained a small lead throughout the first half of the frame.  Oakland would shift the scoreboard in its favor just past midway, holding its final lead of the set at 16-15.  Valpo would then rattle off four of the next five points, getting kills by Pokorny, Porché and Katie Layman (LaPorte, Ind./New Prairie) during the spurt to take control at 19-17.

After a block cut Valpo’s lead to one, the Crusaders came up with three more points in a row on kills by Katie Britton (Mishawaka, Ind./Marian) and Kim Bukowski (Waukesha, Wis./West), followed by a rejection by Britton and Tara Diebler (Indianapolis, Ind./Franklin Central) to make it 22-18.  The Crusaders eventually earned their first chance at the set at 24-19, and while Oakland scored three straight points to stay in the frame, a service error eventually set the match to the fourth set.

It was Oakland with the quick 6-3 lead in the fourth frame, but Valpo rallied back with a 7-2 spurt to take the lead.  After the Golden Grizzlies briefly regained the advantage at 11-10, three straight points went the Crusaders’ lead as they went ahead for good on back-to-back kills by Pokorny and a termination by Britton.

But while Valpo would hold the lead for the remainder of the fourth set, it was no easy task, as Oakland would not let the Crusaders pull ahead by more than three points most of the way.  But at 21-20, the Golden Grizzlies committed back-to-back attack errors followed by a rejection from Diebler and Pokorny to put the match on the brink of going to the fifth set.  Valpo’s first set point opportunity was denied on a kill by Oakland’s Bray, but the second chance was emphatically ended on a termination from Diebler to close the 25-21 win.

The final frame was all Crusaders, as they hit .750 with nine kills in the set while siding out on all six opportunities.  Oakland  The Golden Grizzlies briefly cut the lead to 8-4 just past halfway, but kills by Diebler, Porché and Layman pushed the advantage back out to seven points, and the match would end on a block by Layman and Pokorny. earned the first point of the set, but back-to-back kills by Britton and Pokorny gave Valpo a lead it would never relinquish.

“After the second set, we really cleaned up our blocking and our defense in the third set to keep us in the ballgame,” said Avery.  “Then in the fourth and fifth sets,  we were very good on the offensive side of the ball.  It was really a tale of two teams tonight for us on either side of the break, and thankfully we were able to fight back and earn the win.  Again, thought, I take nothing from Oakland, as they played very well on the road in a non-conference match and gave us a tough battle.”

While Pokorny ended the night with a triple-double, she was far from the only Crusader to put up spectacular numbers on the evening.  Britton and Porché tied for team-high honors with 18 kills apiece, the former doing so with just three attack errors, good for a .405 hitting percentage.  In addition to her 18 kills, Porché added 17 digs for a double-double one night after surpassing 1,000 digs for her career.

Diebler also found herself closing in on a triple-double by match’s end, as the junior ended the night with 11 kills, a career-high ten digs and a match-best six blocks.  Bukowski set the offense all night for Valpo, handing out 48 assists and picking up nine digs, while Taylor Root (Jenison, Mich./Jenison) led the Crusader effort on the back line with 21 digs as Valpo out-dug Oakland 83-68.

“Angie had another great game in both the front and back rows for us tonight,” said Avery.  “Katie Britton also had a fantastic night for us as well in the front row.  There were a lot of really good individual performances tonight, which ultimately helped us to go five sets with a team that was playing well and helped us to prevail in the end.”

Oakland (16-7) was led by a standout offensive effort from Bray, who posted a match-high 30 kills on the evening.  Brittany Holbrook added 15 kills on .314 hitting out of the middle for the Golden Grizzlies.  Alli Kirk led all players on the night with 22 digs.

Valparaiso (18-8) returns to Horizon League play at the ARC next Friday, November 6, as the Crusaders host UIC in a key league matchup for tournament seed positioning.  First serve is slated for 7 p.m. CST, , and all the action can be heard live on WVUR, 95.1 FM, Valparaiso and seen online on the Horizon League Network.  Links for both the audio and video will be available through www.valpoathletics.com, which will also have a link for live stats.