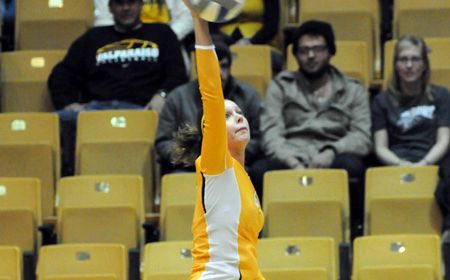 “It was a bittersweet match for me, as more than likely it was the last time our three seniors will be on our home floor in a game situation,” said Crusader head coach Carin Avery.  “I know I’ve mentioned it before, but it just can't be overemphasized how important they have been to our program.  They were able to have some fun tonight because I had the chance to play them in a few different positions.”

All three Crusader seniors had solid performances Tuesday evening.  Setter Kim Bukowski (Waukesha, Wis./West), fresh off being named Horizon League Offensive Player of the Week, played her normal setter position the first two frames before moving to libero the third set.  Bukowski approached a triple-double on the night, going for team-highs of 22 assists and 12 digs to go with seven kills on .583 hitting.

Outside hitter Angie Porché (Lynwood, Ill./Thornton Fractional South) hit .545 with seven kills while also chipping in five digs, three service aces and two blocks.  Porché now sits just six kills shy of 2,000 for her career.  Defensive specialist Haley Wise (Mishawaka, Ind./Mishawaka) played her normal back row spot for the most part, taking over some of the setting duties in the third set as well, and finished with seven digs and five assists.  Wise even stepped into the front row near the end of the second set and registered a kill.

The seniors weren’t the only Crusaders putting together stellar outings on Tuesday.  Sophomore outside hitter Katie Britton (Mishawaka, Ind./Marian) went for a match-high eight kills on .583 hitting and saw some action in the middle in the final set.  Sophomore right side Amy Groesbeck (Wheaton, Ill./North) picked up five kills and five digs while also tallying two blocks and two aces as well on the night.

“Kim really had a good night in every aspect of the game,” said Avery.  “Ending up just a few kills away from a triple-double is always an impressive night for a setter.  I thought Katie Britton did a good job stepping into the middle spot, where she hasn't played all year long.  It’s important to get her some experience in there just as insurance if we would ever need a backup there.”

The first two sets were both easy victories for the Crusaders, as Valpo gained the lead early and pulled away in the middle portions of each set.  The third set saw the Cougars threaten the Crusaders and actually earn a two-point lead at 18-16, quickly erased by a kill from Tara Diebler (Indianapolis, Ind./Franklin Central) and a CSU attack error.  A Valpo service error put the Cougars back on top 19-18, but the Crusaders ended the match on a 7-0 run, including two kills apiece by Britton and Andrea Balsis (Benton Harbor, Mich./Coloma) and an ace by Wise.

Chicago State (0-24) was paced by six kills on .417 hitting by Niena Posey.  Hanya Minta recorded a double-double for the Cougars, handing out 14 assists to go with a match-best 13 digs.

Valparaiso (21-8) returns to Horizon League action this week in the final weekend of regular season play, looking to earn at least a share of the regular season championship.  The Crusaders kick off the weekend Friday at 7 p.m. against Milwaukee.  All the action can be heard live on WVUR, 95.1 FM, Valparaiso.  A link for the audio will also be available online through www.valpoathletics.com, which will also have a link for live stats.