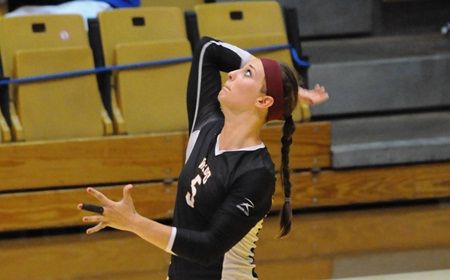 “I thought it was a very good defensive night for us,” said Crusader head coach Carin Avery.  “We had a couple rotations where we were playing very well defensively in the back row, and we were then able to convert on those opportunities.  Those rotations led to some really big runs in every set that helped us get the victory.  Even though the defensive numbers were close, I feel we frustrated Oakland more with our play in the back and we ended up hitting over 100 points higher than they did.

“Two people that were instrumental in our win tonight were Sarah and Kelsey as our outside hitters,” said Avery.  “They get a lot of the defensive transition balls sent their way, and obviously by looking at the numbers tonight, they were able to convert those into kills for us.”

Defensively, the Crusaders got yet another standout performance from sophomore libero Taylor Root (Jenison, Mich./Jenison).  Root registered 22 digs on Tuesday, tying for match-high honors and her 16th match with at least 20 digs this season.  The sophomore, who started the week ranked third in the nation in digs/set, now has 509 digs on the year, already eighth-most in a single season in program history.

The opening set stayed closest the longest on Tuesday, as neither side gained more than a two-point advantage until the late stages of the frame.  A kill by senior Katie Layman (LaPorte, Ind./New Prairie) and a block by Layman and Dooms turned a 15-15 tie into a 17-15 Valpo advantage, forcing Oakland to use its first timeout.  Out of the stoppage, the Golden Grizzlies recorded a kill, but the Crusaders responded with kills from Dooms, Layman and Jenny Pokorny (Geneva, Ill./Geneva) in a four-point spurt to push the advantage to 21-16.  A Crusader attack error briefly slowed the momentum, but Valpo would score the final four points of the set, including two kills by Victor and one from Tara Diebler (Indianapolis, Ind./Franklin Central), to close a 10-2 run and claim the opener.

The second set was a frame of runs, as an early 5-2 Valpo lead turned into an 8-5 deficit.  But the Crusaders responded with five straight points of their own on two kills each by Dooms and Layman and one from Amy Groesbeck (Wheaton, Ill./North) to reclaim the lead at 10-8.  Later in the set, leading just 14-13, Valpo posted a 5-0 spurt, including a solo block and a kill by Dooms and another kill by Diebler, to push the advantage to 19-13.  Oakland answered with a 6-1 run to again close to within one point, and after a pair of late kills by Dooms made it 24-20, the Golden Grizzlies registered three straight kills to stay alive.  But Layman tallied a kill on Valpo's fourth set point chance to send the Crusaders into the in-game break up two sets.

The third set was the least suspenseful of the three, as Pokorny tallied a pair of service aces, Diebler and Groesbeck combined on a block, and Victor and Dooms each picked up kills in a set-opening 7-1 run.  Oakland would close back to within 12-9, but another 7-1 run, featuring three kills each by Diebler and Victor, put the set out of reach at 19-10.  The Crusaders cruised home from there, eventually ending the sweep thanks to back-to-back Oakland attack errors.

The Crusaders' offense was highly efficient Tuesday, posting 49 kills on .269 hitting, the first Oakland opponent in the last 11 matches to hit above the .200 mark.  Diebler hit .500 with eight kills in support of the duo of freshman outsides.  Pokorny handed out 37 assists while also tallying five kills and nine digs.

Valparaiso (18-5) returns back to Horizon League action at the ARC Saturday evening when the Crusaders host UIC.  First serve against the Flames is set for 6 p.m., and as always, live audio and video are available at www.valpoathletics.com, with the audio also available locally on WVUR, 95.1 FM.  Live stats will also be available through the official Crusader website.