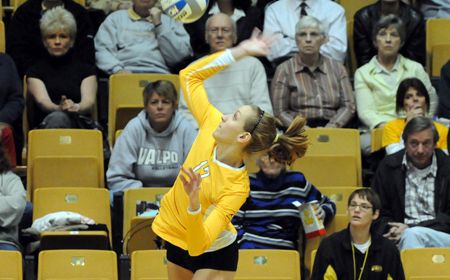 It was Senior Night at the ARC Friday evening for the Valparaiso volleyball team, making it only appropriate that the Crusaders’ quartet of seniors led the way in a 3-1 (25-18, 24-26, 25-13, 25-20) victory over Green Bay.  Middle hitter Katie Layman (LaPorte, Ind./New Prairie) smashed her previous career high by tallying 21 kills Friday night.

“I think this group of seniors in particular just absolutely loves playing at home,” said Crusader head coach Carin Avery.  “They really get excited to play in front of our great fans, and they came out tonight and all just played spectacular volleyball.”

Layman, who entered Friday’s match with a career high of 13 kills, racked up the match-best 21 kills on just 41 swings, hitting at a .439 clip on the night.  The senior registered four kills in each of the first two sets before going a perfect 5-for-5 in set three.  Layman then capped her night with eight kills and no errors in the final set.  She also led the Crusaders with four blocks Friday evening, giving her 247 career rejections, just two shy of Valpo’s all-time top-10 in the category.

“Both Katie and Tara were basically unstoppable at the middles for us tonight,” said Avery.  “They were hitting great shots and taking care of the ball well.  They both really did a tremendous job at keeping Green Bay off balance all night long.”

The opening set Friday was tight through the first half, as neither team could gain more than a three-point advantage in the early going.  Finally, with the score tied 14-all, Layman and Kelsey Victor (Logansport, Ind./Logansport) registered back-to-back kills to force a Green Bay timeout at 16-14.  Out of the stoppage, the duo again went back-to-back with terminations to push the lead to four points.  Bollenbacher then picked up a kill between a pair of Phoenix attack errors to close the 7-0 spurt that left Valpo with a 21-14 lead.  The Crusaders would eventually take the opener on two straight kills by Diebler.

It was all Green Bay in the early going of set two, as the Crusaders used their timeouts early, trailing 5-1 and 10-5.  Out of the second stoppage, Valpo went on a four-point run thanks to two kills and a block by Diebler to move back within striking distance.  Later in the frame, trailing 15-13, two kills and a solo block by Layman and a pair of kills from Mary Dent (Chicago, Ill./Von Steuben) comprised a 5-0 run that gave the Crusaders an 18-15 advantage.  Valpo would hold the lead at 23-20 before two straight blocks by the Phoenix cut the lead to one point.  Amy Groesbeck (Wheaton, Ill./North) responded with a kill to give Valpo two set point opportunities, but Green Bay got a kill and two aces from Carmen Leitermann before a Crusader attack error ended the set in the Phoenix’s favor.

“We let Green Bay back into the match because we couldn't execute offensively,” said Avery.  “Our blocking and back-row defense were never the problem, but rather our inability to score points.  We also had way too many errors in the second set, but I was happy to see we cleaned it up offensively in the last two sets.”

The third set was tied at 6-6 before a 7-1 run, featuring three kills by Diebler, gave Valpo a comfortable 13-7 advantage.  The Crusaders allowed Green Bay just one multi-point spurt from that point to the close of the set, keeping a nice lead throughout the frame.  Leading 19-13 late, Valpo closed the set with six straight points, getting two kills by Diebler and one apiece from Layman and Dent, to take the 2-1 lead into the fourth set.

The fourth frame was again back-and-forth in the early going, but again a mid-set run by the Crusaders proved vital.  Tied at 10-all, Valpo put together another 7-1 run, this one highlighted by three straight kills from Layman, to earn the 17-11 lead.  The distance between the Crusaders and the Phoenix proved vital later in the set, as Green Bay scored four straight points to erase most of a six-point deficit and move within 20-18.  After trading sideouts, Layman and Sarah Dooms (Greenwood, Ind./Center Grove) each picked up kills to push the lead back to four points.  Green Bay got a kill from Lyndsay Zabkowicz to close to 23-20, but appropriately enough it was Layman with the final two kills of the match to give Valpo the win.

Diebler and Layman were the only Crusaders to finish in double figures in kills, while Jenny Pokorny (Geneva, Ill./Geneva) handed out 52 assists on the night in addition to picking up 18 digs.  Dooms also tallied 18 digs, but once again it was Taylor Root (Jenison, Mich./Jenison) leading all players with 28 digs.  Root is now up to 573 digs on the year, just 13 shy of her total from a year ago, which ranks fifth in Crusader history.  As a team, Valpo tallied 110 digs Friday night, matching its highest effort in any length match since the move to 25-point scoring.

“Obviously our back row did a really good job again tonight,” said Avery.  “We’re able to dig so many balls because the team does a great job at taking the scouting report, knowing the other team’s tendencies and getting to where they need to be on the floor to make plays.”

Abbey Gitter was the only Green Bay (8-18, 4-8 Horizon) player to finish in double figures in kills, posting 10 terminations.  Brittany Groth led the Phoenix with 23 digs, while Leitermann ended the night with a match-high nine blocks, including three of the solo variety.

Valparaiso (21-5, 8-4 Horizon) turns around Saturday afternoon for a key league showdown, as co-leader Milwaukee comes to town.  First serve is set for 5 p.m. at the ARC, with audio and video webcasts available at www.valpoathletics.com, while the audio is also available locally on WVUR, 95.1 FM.  Live stats will also be available through the official Crusader website.