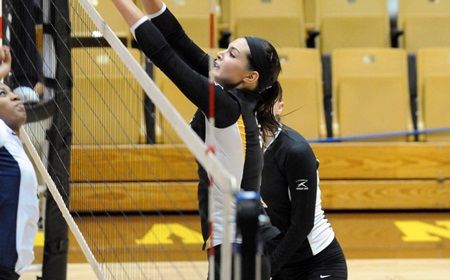 A career-best nine blocks by senior middle Tara Diebler (Indianapolis, Ind./Franklin Central) paced the Valparaiso defensive effort Saturday as the Crusaders slowed down the Cleveland State offense en route to a 3-0 (32-30, 25-19, 25-18) sweep of the Vikings Saturday afternoon in Cleveland, Ohio.

Diebler posted a pair of blocks in each of the first two sets before racking up five rejections in the final frame to surpass her previous career best of eight, also set at Cleveland State in her freshman campaign.  The Crusaders tallied 11 total team blocks Saturday as they held Cleveland State, which entered the match leading the Horizon League in hitting percentage, to just .146 hitting on the afternoon.

“Our game plan going in to today was to slow down their outsides and limit the number of times they set Benz,” said Crusader head coach Carin Avery.  “We knew we had a chance to win if we really executed defensively, something we talked about all week since we didn’t do it the first time we played them.  Hats off to Tara, Katie Layman (LaPorte, Ind./New Prairie), Val Bollenbacher (Bremen, Ind./Bremen) and Jenny Pokorny (Geneva, Ill./Geneva) tonight, they all did a great job on the right side blocking and defending their outsides.”

The first set went the deepest into extra points that the Crusaders have played all season.  A frame that featured 19 ties and six lead changes, Cleveland State looked like it had the set in hand leading 19-15.  But freshman outside Sarah Dooms (Greenwood, Ind./Center Grove) came up with a kill and an ace, junior outside Katie Britton (Mishawaka, Ind./Marian) picked up a kill and Layman recorded a solo block to tie the set up at 19-all.

Valpo actually had two set points at 24-22 after another Britton kill, but the Vikings scored two straight to force extra points.  The Crusaders held off two CSU set point opportunities and would eventually convert on their seventh set point chance of the set, as with the score tied at 30-30, Diebler and Pokorny and then Diebler and Bollenbacher combined on blocks on CSU’s Kara Koch to put the opener in the Crusaders’ column.

“That first set was critical for us, to take that momentum into the rest of the match,” said Avery.  “It really was big for us, especially the way we ended the set with a big block on Cleveland State’s top hitter.”

Neither of the final two sets were nearly as close to coming down to the wire as the opener.  Valpo held an 11-10 lead near the midway point of the second set before reeling off a 6-1 spurt, featuring two kills by Dooms and one from Diebler, to take control at 17-11 and cruise from there.  Then in the final set, CSU erased a 13-8 Crusader lead with a 5-0 run, but Valpo responded with a 5-0 run of its own, including two kills by Britton and a pair of blocks by Diebler, to re-take the advantage and eventually close out the sweep on another kill by Britton.

For the second straight match, Britton led the Crusader offense, picking up 13 kills while committing just one attack error, good for a .364 hitting percentage.  Pokorny handed out 40 assists on the afternoon and was also in on four blocks.

“I thought our serving game was good today,” said Avery.  “We did a good job at taking them out of system a lot and made their offense predictable, which we didn’t do the first time we met.  We executed well offensively as well, and Katie Britton had another great day for us.  It was a good win, one I think we needed since we hadn’t beaten anyone ahead of us all year in league play.  We’re just really proud of the girls for their hard work this week, and glad we were finally able to get two big wins this weekend.”

Valparaiso (23-6, 10-5 Horizon) takes a step out of league play Tuesday evening when the Crusaders travel to take on Chicago State.  First serve is set for 7 p.m.