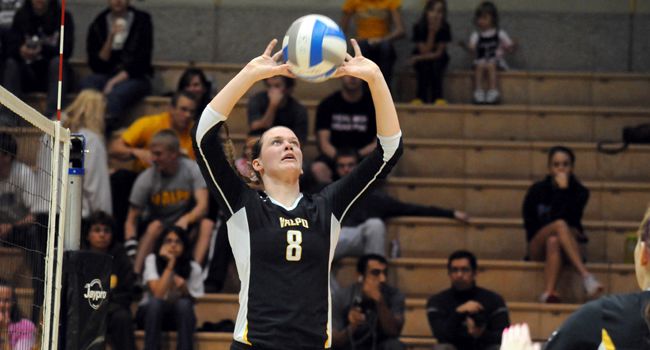 This Week in Crusader Volleyball: Valparaiso kicks off the 2011 volleyball season this weekend in Morgantown, W.V., playing four matches as part of the WVU Mountaineer Invitational.  The Crusaders enter the season in search of their tenth consecutive 20-win campaign.

Following the Crusaders: All four matches of the WVU Mountaineer Invitational will be broadcast live over the airwaves of Valpo’s student radio station, WVUR (95.1 FM), and online at www.valpoathletics.com.  Live stats will be available for all four matches as well through the official website of the Crusaders.

Head Coach Carin Avery: Carin Avery enters her tenth season at the helm of the Crusader volleyball program having experienced nothing but success at head coach.  Avery is 221-81 (.732) in her nine years at Valpo and owns a 276-105 (.724) record overall in 11 years as a head coach.  She ranks among the top-20 winningest active coaches in Division I volleyball by winning percentage and is Valpo’s all-time leader in both wins and winning percentage.

Series Notes: Despite having four opponents on the slate, Valparaiso has faced just one of this weekend’s foes in program history.  The Crusaders have met the host Mountaineers twice on the volleyball court, with West Virginia winning both matchups.  The last meeting came on Sept. 7, 1996 in Athens, Ohio, with WVU earning a 3-2 (15-6, 11-15, 9-15, 15-6, 17-15) victory.  Four Crusaders reached double figures in kills, with Cheri Hughes leading the way with 14 kills to go with a match-high 19 digs.

Valpo in Season Openers: The Crusaders have dropped their season-opening match in each of the last two seasons, falling to Virginia in Philadelphia, Pa. to open last season.  Under Avery, Valpo is now 5-4 in season openers.  Last year’s season-opening loss didn’t seem to harm the Crusaders, however, as they proceeded to rattle off 11 consecutive victories.

Taking On a Ranked Foe: Valpo’s season-opening opponent, Ohio State, enters the 2011 season ranked #21 in the AVCA preseason poll, marking the first time in nearly five full years that the Crusaders will face a ranked opponent.  Remarkably, the last time that Valpo faced a ranked foe, it played three straight games against ranked opposition, as the Crusaders took on #6 Santa Clara, #21 Notre Dame and #13 Missouri on Sept. 1-2, 2006.

Plenty of Experience Returns: The Crusaders enter the 2011 campaign with a good bit of experience returning at most positions around the court.  Senior setter Jenny Pokorny and junior libero Taylor Root both return as the incumbents at their respective positions.  Both starting outside hitters from a season ago, senior Katie Britton and sophomore Sarah Dooms, return as well.  Valpo has experienced depth as well both in the back and the outsides.  Sophomore Ariel Cudney, who led the Horizon League as a rookie in aces, and sophomore Sarah Chrabaszcz fill the Crusaders’ DS role, while senior Amy Groesbeck looks to be the Crusaders’ right side and junior Mary Dent is in the mix on the outside.

What Needs Replaced: Simply, the middles.  Valpo graduated both Tara Diebler, a four-year starter, and Katie Layman, who started for two and a half years, from last year’s squad.  A youthful but talented group will look to fill the void, as sophomores Janelle Hobbs, Ellen Vanden Berg and Kelsey Victor, along with redshirt freshman Lindsey Hauch, are in the battle for the two middle spots.

What’s New: A pair of freshmen join the 12 returning players on this year’s Crusaders.  Tricia Prince, who was an Honorable Mention All-State honoree at Davison [Mich.] H.S. as a senior and twice earned First Team All-Conference accolades, adds to the depth at outside hitter for Valpo.  Morgan Beil was an All-Region, All-District and All-Conference selection during her time at Marquette [Mo.] H.S., where she helped lead the Mustangs to a state quarterfinal berth as a senior.  Beil can play both the right side and the middle for the Crusaders.

Record Book Watch: A couple of Crusaders are looking to move up Valpo’s career charts entering the 2011 season.  Most notably, Root, who set new single-season team and Horizon League records last year with 754 digs en route to Honorable Mention All-American accolades, has 1,340 digs through two seasons, already seventh all-time in Valpo history.  The junior sits less than 200 digs shy of the third spot and just 547 out of second.  Meanwhile, Pokorny enters 2011 with 1,732 career assists, eighth all-time.  The senior needs 1,049 assists this season to crack the Crusaders’ top-five in the category.