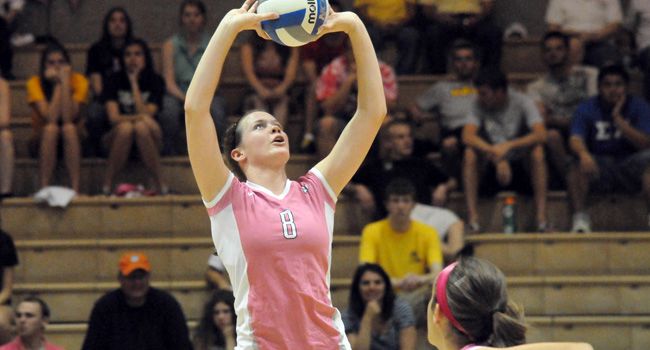 Valpo looked poised to take the first set, going on a big 7-0 run around the midway point, featuring a pair of kills from sophomore Sarah Dooms (Greenwood, Ind./Center Grove), to claim an 18-12 advantage.   But leading 21-15, the Crusaders gave up six straight points to CSU to make it 21-all.  The teams started to trade sideouts from there, with the Crusaders earning set point at 24-23 following a kill by sophomore Ellen Vanden Berg (Little Chute, Wis./Little Chute).  But a pair of Valpo errors would give the Vikings set point, and CSU took the opener on a kill by Kourtney Volkmer.

The second set was a set of runs for both sides, as neither squad would side out at above a 40% clip for the frame.  The tone was set early, with Valpo running off the first four points before Cleveland State scored eight of the next 12 to tie it at 8-all.  With the score tied at 14 apiece, CSU tallied the next four points to force a Crusader timeout, but out of the stoppage, Valpo scored five straight, highlighted by kills from senior Katie Britton (Mishawaka, Ind./Marian) and redshirt freshman Lindsey Hauch (Coloma, Mich./Coloma) to claim a 19-18 lead.  In the end, it would be the Crusaders with the final run, as, trailing 22-21, they scored the last four points to even up the match going into the in-game break.

The third set was the antithesis of the second frame, with neither team able to gain control of the set.  The set was played within two points all the way up until the late stages, when back-to-back kills from senior Jenny Pokorny (Geneva, Ill./Geneva) capped a four-point spurt to give Valpo a 22-18 lead.  Cleveland State responded with the next three points, but a solo block by Vanden Berg made it 23-21 Valpo.  The Vikings scored the next two points to tie it at 23-all, but a service error gave the Crusaders a chance to take the set and Britton came through with a kill to put Valpo ahead two sets to one.

The fourth frame saw Cleveland State be the first team to put together a run in an attempt to gain momentum, as the Vikings rattled off four straight just past the halfway point to take a 16-13 lead.  Following a timeout, the Crusaders worked their way back into it, scoring seven of the next 10 points to go ahead 20-19.  A kill by Britton put Valpo on top 21-20, but the Vikings scored the next two points to re-claim the advantage.  Following a trio of sideouts, the Crusaders had the serve with the set tied at 23-all, but a kill by Jordan Goad followed by a block gave the Vikings the set and forced the decisive fifth frame.

The two teams traded the first four points of the fifth set before the Vikings took control, as CSU rolled off five straight points to go ahead 7-2.  A block by Hauch and freshman Morgan Beil (St. Louis, Mo./Marquette) briefly slowed Cleveland State’s momentum, but the Vikings scored six more in a row to cap an 11-1 run and move themselves two points from earning the win.  Valpo would eventually stave off four match point chances for CSU, but a kill by Megan Barhorst gave Cleveland State the victory.

Britton led the Crusaders on Saturday evening with 16 kills, matching her season high for the second straight match, but she was the only Valpo player to tally more than eight terminations on the evening.  Pokorny posted 39 assists, 19 digs and seven kills on .389 hitting as well.  Junior Taylor Root (Jenison, Mich./Jenison) paced the Crusader effort in the back with 27 digs, helped by 19 digs from Dooms as well, while Beil was in on a team-best six of Valpo’s 10 blocks.

Valparaiso (13-8, 4-3 Horizon) looks to bounce back on Saturday afternoon as it concludes the first half of Horizon League play against Youngstown State at the ARC.  First serve is slated for 2 p.m., and all the action can be heard live on WVUR, 95.1 FM, Valparaiso and seen via the Horizon League Network.  Links for both, as well as live stats, will be available at www.valpoathletics.com.