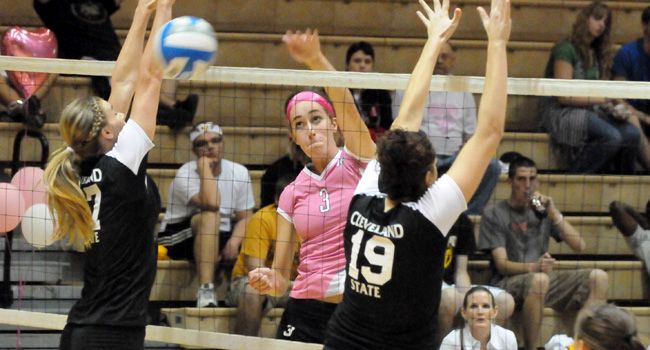 “I’ve been really proud of this team in the last two weeks, because we’ve had to adjust our lineup to compensate for injuries in various places on the floor,” said Crusader head coach Carin Avery.  “Thankfully, this year is probably the most depth we’ve had in terms of the number of players who can step in at any given point, and I think we saw it again tonight.”

Beil registered kills on each of her first eight swings of the match en route to a .769 hitting percentage, finishing the evening with 10 kills on 13 attacks without a hitting error.  Her .769 hitting percentage was the fifth-best in Crusader history in a three-set match.  Meanwhile, Vanden Berg tied Beil for match-high honors with 10 kills, posting her 10 terminations on 15 swings with just one error to hit at a .600 clip for the match.  The duo led the Crusaders as Valpo hit .394 as a team on Friday, posting 46 kills on 94 swings with just nine attack errors.

“Obviously our middles, both Morgan and Ellen, did a fantastic job tonight,” said Avery.  “But in order to convert like that in the middle, you have to have great passing, great defense and great choices by your setter.  It’s really a total team effort when your middles do so well.”

Vanden Berg helped the Crusaders claim an early lead in set one, posting three kills and combining with redshirt freshman Lindsey Hauch (Coloma, Mich./Coloma) on a block during a 10-2 run that gave Valpo a 14-5 advantage.  Loyola closed back to within 17-11, but the Crusaders responded with five straight points, including a trio of kills by Hauch, to take control, and a Rambler attack error eventually ended the frame in Valpo’s favor.

The Crusaders needed even less time to take control of set two, opening the frame with a 7-1 run that featured two kills from sophomore Janelle Hobbs (Hartland, Wis./Arrowhead).  Loyola would fight back to trail just 12-9, but Valpo answered with four straight points, including kills by junior Mary Dent (Chicago, Ill./Von Steuben) and senior Jenny Pokorny (Geneva, Ill./Geneva) to extend its lead to seven points.  The Crusaders’ lead never fell below six points the rest of the way, with a kill by senior Amy Groesbeck (Winfield, Ill./Wheaton North) sending Valpo into the in-game break up two sets to none.

Again, an early-set run would give Valpo all the breathing room it would need in the final frame.  Leading 5-4, back-to-back Vanden Berg kills jump-started a 7-1 spurt which increased the Crusaders’ lead out to 12-5.  Then, later in the set with the score 15-9, Dent and sophomore Sarah Dooms (Greenwood, Ind./Center Grove) posted kills during a 5-1 run that pushed the lead up into double figures.  Another kill by Dent proved to be the match-ender as Valpo concluded the clean sweep.

Valparaiso (16-8, 7-3 Horizon) looks to make it four straight victories Saturday afternoon, as the Crusaders host Green Bay at 4 p.m.  All the action can be seen live on the Horizon League Network, with links to the live video and live stats available at www.valpoathletics.com.