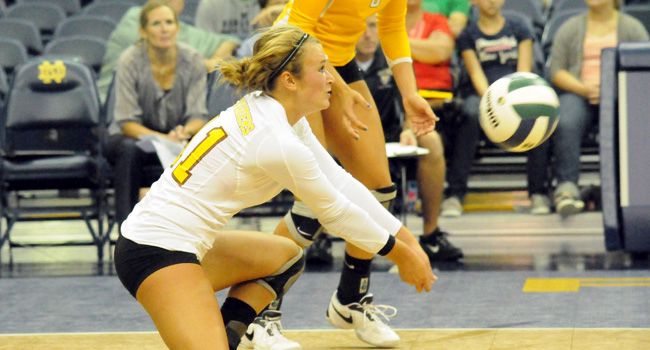 Fourth-seeded Valparaiso had a pair of set point chances to tie its Horizon League semifinal at top-seeded Milwaukee at one set apiece in the second frame, but the Crusaders couldn’t convert and eventually fell to the host Panthers 3-0 (25-21, 28-26, 25-17) Saturday afternoon in Milwaukee, Wis.

“I’m really proud of our team, because we had a great effort today,” said Crusader head coach Carin Avery.  “We never gave up and stayed very aggressive throughout the match.  Milwaukee just played great, didn't make many mistakes and played like they were the top seed who hadn’t lost a match in the league this year.  But I thought we battled them hard and even though we don't like the outcome, we can't fault the effort.”

The Crusaders got out to a fast start in Saturday’s contest, jumping out to a 7-1 lead right out of the gate in the opening set, thanks to large part to four early kills by junior Mary Dent (Chicago, Ill./Von Steuben).  Milwaukee wouldn’t let Valpo extend the lead any further, however, eventually rallying to tie the frame at 12-all.  Back-to-back kills by redshirt freshman Lindsey Hauch (Coloma, Mich./Coloma) and senior Jenny Pokorny (Geneva, Ill./Geneva) restored a two-point lead to Valpo’s side, but after the teams traded sideouts over the next four points, the Panthers rattled off a 7-1 run to take the lead for good on their way to winning the opener.

Milwaukee led throughout much of the first half of the second set, but the Crusaders rattled off five straight points just past the midway mark, including a pair of kills and a block by senior Katie Britton (Mishawaka, Ind./Marian) to take a 17-15 lead.  The Panthers answered with three straight points to regain the lead, and looked poised to take the second frame after a three-point spurt put UWM ahead 23-19.

But Valpo rallied back, getting kills from Britton and sophomore Ellen Vanden Berg (Little Chute, Wis./Little Chute) as well as a Panther hitting error, to close within one point at 23-22.  A Milwaukee block gave the Panthers set point, but back-to-back rejections by the Crusaders tied the set at 24-all, as Hauch teamed with first Vanden Berg and then freshman Morgan Beil (St. Louis, Mo./Marquette) on the critical blocks.

A hitting error by Milwaukee gave Valpo its first set point opportunity, but the Panthers responded with a kill to tie it at 25-25.  Another UWM attack error provided the Crusaders a second chance, but again the Panthers got a kill to tie the set.  A service ace and a kill by Milwaukee closed out the second frame in the Panthers’ favor, sending UWM into the in-game break up two sets.  Valpo held a slim lead approaching the midway point of the third set, but a 10-2 Milwaukee run gave the Panthers a lead they would not relinquish.

Dent paced the Crusaders on Saturday afternoon with 10 kills, while Britton added nine terminations.  Valpo hit just .087 for the match, as it was forced into 23 hitting errors.  Pokorny tallied a double-double with 25 assists and 10 digs, while junior Taylor Root (Jenison, Mich./Jenison) led all players with 21 digs.  Hauch also posted 10 digs and added three blocks, to go along with four rejections apiece by Beil and Vanden Berg.

Elizabeth Egerer led Milwaukee (24-4) with 12 kills on Saturday, while Rachel Neuberger tallied 10 kills on .348 hitting.  Neuberger also led all players with five blocks.  Morgan Potter led the Panthers on the back line with 18 digs.

Valparaiso (20-14) will close out the season next Saturday, Nov. 26 with a single match at Western Michigan.  First serve is slated for 6 p.m. CST, with live statistics available through www.valpoathletics.com.

“We're excited to get back on the court next Saturday at Western Michigan and have one last match together as a team,” said Avery.