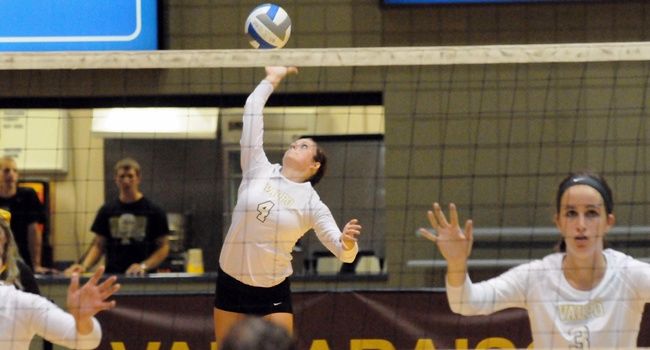 The Crusaders never led in the opening set, as Illinois State hit .326 with 18 kills to take a one-set advantage. But Valpo turned the tables in the second frame, hitting .400 with 14 kills to send the match into the in-game break tied at one set apiece.

Illinois State actually led 6-1 early on the second set, and after five straight Crusader points, picked up another point to lead Valpo, 7-6. But the Crusaders rattled off four more points in a row to cap a 9-1 run, taking a 10-7 advantage and forcing a timeout from the Redbirds.

Following the stoppage, the teams traded sideouts for the next six points as Valpo maintained a three-point lead at 13-10. But the Crusaders then started to pull away, scoring four more in a row, three of which came on kills from redshirt sophomore Kelsey Victor (Logansport, Ind./Logansport), to pull out to a 17-10 advantage.

Illinois State scored a point on a kill to briefly quell the Crusader momentum, but that didn't deter Valpo, which scored the final eight points of the set to run away. Four different Crusaders had kills during the final run, while Victor and sophomore Morgan Beil (St. Louis, Mo./Marquette) combined for a pair of blocks to close out the 25-11 set win.

"We had a very slow start to the match, but quickly turned that around in set two," said Crusader head coach Carin Avery. "We struggled early with making too many hitting errors and not being able to find the floor for kills, and also weren't able to slow them down defensively. Then finally in the second set, our attacking really came around and we were able to sustain our attack throughout the rest of the match."

Valpo led throughout the first half of the third set, putting some distance between itself and the Redbird with a 5-0 run at 7-7. With a 14-9 Crusader lead, however, Illinois State rattled off 10 points out of the next 11 to go ahead 19-15.

After five straight sideouts left the Crusaders still trailing 21-18, senior Mary Dent (Chicago, Ill./Von Steuben) tallied a kill, followed by a service ace by junior Ellen Vanden Berg (Little Chute, Wis./Little Chute) to bring Valpo within 21-20. After an ISU kill, Beil and Victor recorded back-to-back kills to tie the frame at 22, and following a timeout, redshirt sophomore Lindsey Hauch (Coloma, Mich./Coloma) posted two kills in a row to give Valpo set point. Once again, it was Beil and Victor combining on a rejection at the net to close the 25-22 win for the Crusaders and give them a 2-1 lead.

After a back-and-forth first half of the fourth set, Valpo rolled off seven straight points at a critical juncture, turning a 16-15 deficit into a 22-16 lead. Vanden Berg tallied three kills during the streak to go along with a pair from junior Janelle Hobbs (Hartland, Wis./Arrowhead). Illinois State would rally back to within 23-20, but Beil and Hobbs teamed up for a block to give Valpo match point and Beil converted the first opportunity with a kill to close the match.

Senior Taylor Root (Jenison, Mich./Jenison) led the effort on the back line with 25 digs, one of four Crusaders to hit double figures. Dooms registered 16, Cudney 15 and Berrington 12 as the trio all finished the night with double-doubles. At the net, Beil tallied six blocks to go with four apiece from Hobbs, Vanden Berg and Victor.

"I thought we did a great job distributing the ball evenly tonight, which resulted in one of our better hitting matches of the year so far," said Avery. "I also thought we did a good job staying disciplined in ball handing, whether on serve receive or defensive transition. I really think that was the key to the match, that as it progressed, we maintained our discipline in ball handling, and that's why we won."

Valparaiso (4-4) competes in the third of its four early-season tournaments this weekend, traveling to Morehead State for the MSU Eagle Challenge. The Crusaders take on Missouri at noon on Friday before facing Savannah State at 3:30 p.m., with live stats for the entire weekend available through www.valpoathletics.com.