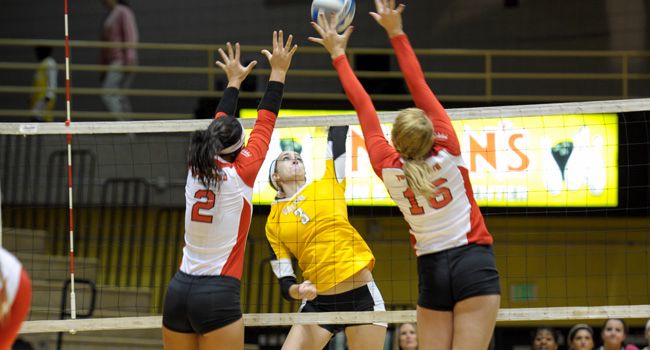 Winning the second set deep into extra points gave Valparaiso the momentum it was looking for, as the Crusaders went on to down Youngstown State, 3-1 (22-25, 33-31, 25-17, 25-14), Saturday evening at the ARC as part of Homecoming weekend.

The opening set saw the Penguins lead nearly start-to-finish, although the Crusaders made one late push to make a go at the opener. Trailing 20-15, sophomore Morgan Beil (St. Louis, Mo./Marquette) posted back-to-back kills, and a YSU error followed to move the Crusaders within two points. After a Valpo error, senior Mary Dent (Chicago, Ill./Von Steuben) picked up a kill and Beil followed with her third termination of the spurt to close to within 21-20. But the Penguins scored the next three points to pull away again, eventually claiming the opening frame on their third set point opportunity.

It looked for a while like Youngstown State (12-8, 2-4 Horizon) would hold a two-set lead into the locker room, as the Penguins led by four points late at 22-18. Three straight YSU errors brought Valpo back to within one, however, and following a Penguin kill, first redshirt sophomore Kelsey Victor (Logansport, Ind./Logansport) and then junior Ellen Vanden Berg (Little Chute, Wis./Little Chute) racked up kills to knot the frame at 23-all. A YSU kill gave the Penguins set point at 24-23, but Victor answered with a kill of her own to set up a long run of extra points.

The sides combined for nine set point chances in all before the Crusaders finally converted the winner, ending the set with 17 ties and nine lead changes. Both sides ran out of subs in the late stages, with junior Janelle Hobbs (Hartland, Wis./Arrowhead) rotating to the back row after combining on a triple block with Beil and redshirt sophomore Lindsey Hauch (Coloma, Mich./Coloma) to make it 29-all. After a YSU kill, Hobbs smartly let a serve go just wide for a service error to tie the set at 30 apiece, and then had a couple key digs in the final few points. Trailing 31-30 after an error, the Crusaders got back-to-back big kills from junior Sarah Dooms (Greenwood, Ind./Center Grove) to earn a fourth set point try, which junior Taylor Root (Jenison, Mich./Jenison) converted with a service ace.

"I really think that us winning the second set was pivotal," said Crusader head coach Carin Avery. "Winning that set, after being down like we were late, gave us a lot of energy and momentum going into the third set, and we really rode with that momentum the rest of the way."

The third set was back-and-forth through the early stages until the Crusaders whipped up a big run on the serve of junior Ariel Cudney (LaPorte, Ind./LaPorte). Vanden Berg was a part of all five points the Crusaders earned during the 7-0 run which gave them an 18-11 advantage, posting three kills and combining with first Victor and then Dooms on blocks. Valpo cruised from there, scoring the final three points of the set to take a 2-1 lead.

An early run made the difference in the decisive fourth set, as a kill from Vanden Berg tied the set at 4-4 and Dooms stepped back to serve the next seven points. The junior had a service ace during the run, while Hauch posted two kills and also combined with Vanden Berg on a rejection as Valpo pulled out to an 11-4 edge. The lead never fell below four points the rest of the way, and the Crusaders closed out the four-set victory on an emphatic kill from Victor.

The Valpo offense hit .287 with 68 kills on Saturday, posting .419 hitting percentages in each of the last two sets. Vanden Berg led the way with a career-high 19 kills while hitting at a .441 clip, while Beil hit .385 with 14 kills. Dooms posted 12 kills and 14 digs for her second straight double-double, and Dent closed out four Crusaders in double figures with 11 kills.

Vanden Berg also tied her season high with seven blocks as Valpo posted 9.5 blocks as a team on Saturday. Root led the Crusader effort on the back line with 25 digs, and Cudney posted a double-double of her own with 16 digs and 26 assists.

"We talked last night about how we need everybody playing well to win," said Avery. "Tonight was a perfect example of that - we had everyone step up and play well in a total team effort."

Valparaiso (11-9, 3-2 Horizon) hits the road next weekend for the annual Wisconsin swing in Horizon League play, starting with a 7 p.m. match on Friday evening at Green Bay. Live stats for the match will be available through www.valpoathletics.com.