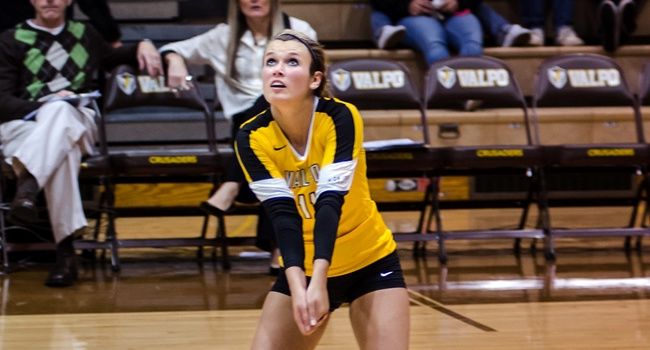 A school-record performance from senior Taylor Root (Jenison, Mich./Jenison) propelled her into the top-10 in NCAA history in digs, while junior Ellen Vanden Berg (Little Chute, Wis./Little Chute) registered one of the best matches in program history on both sides of the ball as Valparaiso swept Green Bay, 3-0 (25-19, 25-15, 25-19) in Horizon League play Friday evening in Green Bay, Wis.

“It was a great win for us tonight because it was a total team effort,” said Crusader head coach Carin Avery.  “We came to play tonight and we were very good in every aspect of the game.  I have to say our defense and passing started out strong, which we were able to maintain all match to propel us to a sweep tonight.”

Root tallied nine digs in the first set Friday before recording an astounding 17 digs in the second frame.  With her fifth dig of the third set, Root moved past Jacksonville’s Michelle Walroth into the top-10 in NCAA history in digs and also matched her own school record for digs in a three-set match.  Root would end the night with 34 digs, bettering by three her previous program record for digs in a sweep, to give her 2,460 career digs, just 15 shy of ninth all-time in NCAA Division I volleyball.

Meanwhile, Vanden Berg had a huge match of her own on both sides of the net.  The junior picked up five kills on 11 swings without an error and also posted three blocks in the opening set.  Vanden Berg         then one-upped her performance in set two, tallying seven kills on nine attacks to go with three more blocks.  While the Little Chute native didn’t register a block in the final frame, she did pick up four more kills on six swings, ending the night hitting .615 (16 kills, 0 errors, 26 attacks) with six blocks.

The three-set match featured just five ties and one lead change, as Valpo never allowed Green Bay within closer than two points past the opening stage of any of the three sets.  The opening set saw the Crusaders turn a 2-1 deficit into a 12-5 lead thanks to a 11-3 run, including kills from four different players as well as three blocks, all of which Vanden Berg was in on.  The Phoenix never got closer than four points the rest of the way as Valpo took the opener.

Valpo went on an early 8-1 spurt in the second set to go ahead 10-3, as Vanden Berg picked up three more blocks as well as two kills, while redshirt sophomore Kelsey Victor (Logansport, Ind./Logansport) combined with Vanden Berg with a pair of the rejections and also picked up a kill of her own.  The lead was cut to five late at 20-15, but the Crusaders scored the last five points of the set, including three kills by senior Mary Dent (Chicago, Ill./Von Steuben), to go into the in-game break up two sets.

The third set was the closest of the night, as after a six-point lead at the midway point, the Crusaders saw their lead whittled to two at 19-17.  A pair of Dent kills sandwiched a successful setter dump by freshman Kelsey Berrington (Britton, Mich./Tecumseh) to push the edge to 22-17, but a pair of blocks by the Phoenix made it 22-19.  Victor registered a kill to get the Crusaders the serve back, and following a service ace by redshirt sophomore Lindsey Hauch (Coloma, Mich./Coloma), Valpo converted its first match point on an error by Green Bay.

Dent added a solid offensive weapon to Vanden Berg’s impressive night, closing the night with 12 kills on .297 hitting.  Overall, the Crusaders out-killed Green Bay (10-10, 1-5 Horizon) by 20 kills, a 51-31 advantage, and hit over 100 points better.  Berrington handed out 23 assists, while junior Ariel Cudney (LaPorte, Ind./LaPorte) added 17 assists of her own.  Junior Sarah Dooms (Greenwood, Ind./Center Grove) tallied 19 digs and Hauch 12 to go along with Root in the back row, while Victor was part of four of the Crusaders’ eight blocks.

The Crusaders held all of Green Bay’s attackers into single figures in the kills category, as Lyndsay Zabkowicz led the way for the Phoenix with nine kills.  Brittany Groth paced Green Bay with 24 digs, while Katie Mroczenski and Carmen Leitermann were both part of five of the Phoenix’s ten blocks.

Valparaiso (12-9, 4-2 Horizon) will look to make it a perfect weekend on the road as the Crusaders play at Milwaukee on Saturday afternoon at 4 p.m.  Live video of the match is available through the Horizon League Network, while links for the live video, as well as live stats, will be available at www.valpoathletics.com.