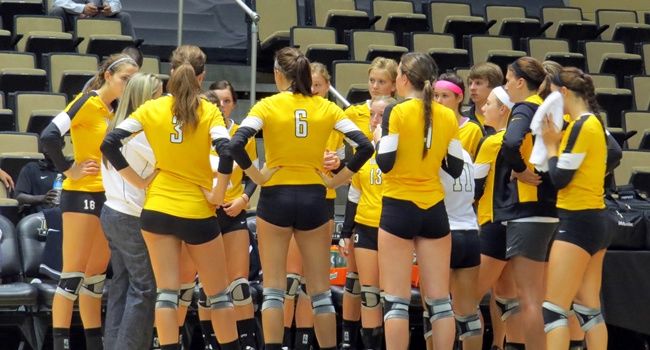 "This was one of our most challenging and best wins in a season-opening match since I've been here," said Crusader head coach Carin Avery.  "UCF is a great team and is going to be ranked high in the RPI by the end of the year - it was a really great win for us.  They were bigger and more physical at the net, but I definitely feel we won the serve and pass game, and also did a great job avoiding errors.  It was really an unbelievable effort of keeping the ball aggressively in play and making good things happen."

Valpo got the season opener off to a quick start, taking each of the first two sets from the host Knights fairly easily.  The Crusaders never trailed after the opening points of the first set, and then claimed the lead for good in the second frame with a three-point spurt to take a 13-10 lead midway through the set.

But out of the locker room following the in-game break, UCF turned the match on its heels, leading all the way in the third set and then erasing a three-point Crusader lead at 17-14 in the fourth set with a run of six straight points.  Valpo fought back, as a pair of kills apiece from senior Sarah Dooms (Greenwood, Ind./Center Grove) and freshman Emily Campbell (Grand Rapids, Mich./Forest Hills Central) helped to tie the set at 21 apiece.  But the Knights would take the final four points to force a decisive fifth set.

Valpo took control early in the fifth and final frame, scoring the first three points on a Dooms kill, a UCF error and a block by juniors Morgan Beil (St. Louis, Mo./Marquette) and Kelsey Victor (Logansport, Ind./Logansport).  The Crusaders would extend the edge to 7-3, and then after the Knights cut it down to 8-6, Campbell picked up a kill and a service ace around a UCF error to push it back to an 11-6 advantage.  Valpo would just trade points the rest of the way in finishing the season-opening win.  The Crusaders did not commit an attack error in the fifth set, hitting .385 with five kills to close things out.

Dooms stood out offensively for the Crusaders in the opener, matching her career best with 18 kills on .385 hitting.  The senior outside hitter also narrowly missed a double-double, picking up nine digs.  Beil added 10 kills on .391 hitting as well, while the balanced Valpo offense also saw Victor finish with nine kills and Campbell with eight as the Crusaders hit .227 with 57 kills for the match.

Campbell paced the Crusaders in the back row, as the rookie tallied 14 digs.  Fellow freshman Morganne Longoria (Burlington, Wis./Burlington) earned the start at libero and added 13 digs as well.  At the net, Beil and senior Janelle Hobbs (Hartland, Wis./Arrowhead) tied for team-high honors with three blocks as the Crusaders totaled 11 blocks as a team.

13 Crusaders earned court time in the nightcap sweep of Arkansas-Pine Bluff, as all 15 healthy players who are active this season saw action on the day.  The match started out with the Valpo offense on fire, as the Crusaders needed just 19 swings to put down 14 kills in the opening set, hitting at an insane .684 clip for the frame.

Valpo surrendered the first five points of the second set to the Golden Lions, but rallied in the first half of the frame and took the lead for good as a 6-1 run at the midway point gave the Crusaders a 15-11 lead.  It was a wire-to-wire win in the third set to close out the sweep, with Valpo jumping out to an 8-2 edge and never looking back.

"It was awesome to see everybody play in the win over Arkansas-Pine Bluff," said Avery.  "Obviously you can't always get everybody out on the court on the first day, but we were able to, and I think it was good for the team.  It helps get the nerves out and lets you see where everybody's at.  The girls who didn't play in the UCF match came in and all really did a great job contributing to help us get the win."

Freshman Rachel Bruinsma (New Era, Mich./Western Michigan Christian) earned the start on the outside for Valpo and took advantage, tallying a match-high 10 kills on .273 hitting.  Six other Crusaders picked up at least four kills, with five of those players needing eight swings or less to do so, including a perfect five-kill, five-attack effort from senior Ellen Vanden Berg (Little Chute, Wis./Little Chute).  On the whole, Valpo out-killed UAPB by a 39-21 count.

Valparaiso (2-0) closes out play at the UCF Invitational with a pair of matches on Saturday.  The Crusaders will face Alabama State at 9 a.m. CT and UNF at 4:30 p.m., with live stats for both matches available through ValpoAthletics.com.