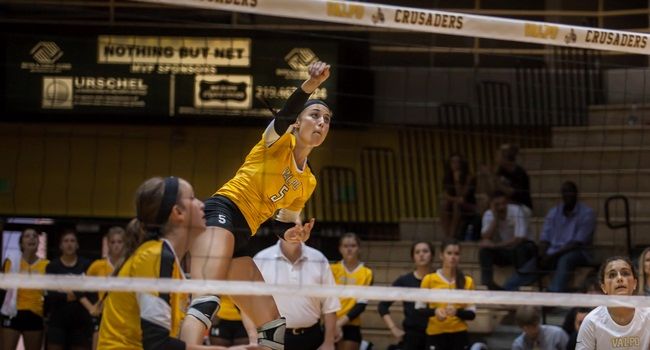 The term Cardiac Crusaders could easily apply to the Valparaiso volleyball team these last three weeks, as on Tuesday evening, for the third time in the last five matches, Valpo twice fought back from one-set deficits to rally for a 3-2 (19-25, 25-23, 19-25, 25-23, 16-14) victory in non-league action at IUPUI.

Senior Sarah Dooms (Greenwood, Ind./Center Grove) had a career night on both offense and defense to lead the Crusaders on Tuesday. Past the midway point of her fourth season, Dooms set new career highs in both kills (19) and digs (25) as Valpo came out with the victory, while also hitting at a .304 clip and matching her career best with four blocks.

Defensively, freshman Morganne Longoria (Burlington, Wis./Burlington) was just one dig shy of a career high, picking up a team-best 27 digs to go with Dooms' 25. Berrington added 12 digs, Campbell 11 digs and senior Ariel Cudney (LaPorte, Ind./LaPorte) tallied 10 digs as all three players joined Dooms with double-doubles at the end of the night. Redshirt junior Kelsey Victor (Logansport, Ind./Logansport) led Valpo with six blocks, while Vanden Berg was in on five of the Crusaders' nine rejections.

“It wasn't the prettiest of matches tonight for us, but we were able to turn it around when it mattered,” said Crusader head coach Carin Avery. “It was nice to see our hitting was able to get back on track when we needed it to in the fourth and fifth sets. I'm so proud of this team – when they are down, they get working, they have a lot of confidence, and we've pulled out a number of victories recently because of it.”

IUPUI claimed the opening set on Tuesday with relative ease, never trailing, and looked like it would capture the second set as well, as the Jaguars were up 20-17. But the Crusaders rallied to send the match into the in-game break at one set apiece, scoring eight of the final 11 points of the frame, a run which started with back-to-back kills by Campbell and which culminated in a Dooms termination.

The third set was tight through the midway stages, and Valpo held a slight 17-16 lead before IUPUI reeled off seven straight points to take control. The Jaguars scored the first four points of the fourth set and never trailed until the very end, but the Crusaders remained within striking distance the entire way. Then, down 22-20 late, Dooms put Valpo on her back, scoring back-to-back kills and then answering an IUPUI kill with another termination to make it 23-all. Vanden Berg combined with sophomore Nicole Lambert (St. Charles, Ill./East [Radford]) to give Valpo its first lead of the set at 24-23, and then it was only apropos that Dooms would finish off the frame with yet another kill to force the decisive fifth set.

The fifth and final set would go back and forth throughout, featuring 10 ties and four lead changes. IUPUI was the first team to claim a multi-point lead at 6-4, but the Crusaders responded with three straight points to re-claim the lead. Then, Valpo scored three straight on two kills by Beil and one from Berrington to go ahead 11-8, but after the teams traded sideouts, the Jaguars rattled off four straight to move within two points of the match at 13-12.

Following their second timeout of the set, Dooms and Vanden Berg teamed up on a block to make it 13-all, and the latter then picked up her 12th and final kill of the match to give Valpo match point. IUPUI countered with a kill to force extra points, but again it was the senior Dooms there to pick up the kill, pushing the score to 15-14 Valpo. Then, on what turned out to be the match's final point, Dooms was responsible not for the finish, but for the setup, tallying an assist on a kill by freshman Rachel Bruinsma (New Era, Mich./Western Michigan Christian) to close out the match.

Valparaiso (16-4) returns home this weekend for a weekend of Horizon League play, starting off with Friday night's match against league newcomer Oakland. First serve is slated for 7 p.m., and links for live stats and live video through the Horizon League Network will be available at ValpoAthletics.com.