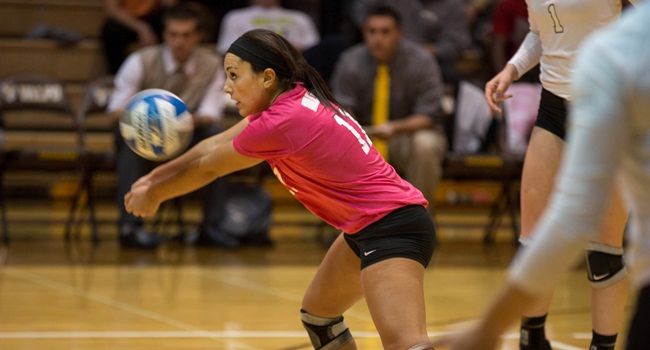 Four weeks ago, it was the Crusaders who rallied twice from one-set deficits at the ARC to defeat Green Bay, but Valpo was unable to prevent the Phoenix from turning the tables on their home court. The loss snapped Valpo's nine-match winning streak and dropped the Crusaders out of a tie for first place in the Horizon League standings.

The Crusaders used .441 hitting in the opening set to gain a 1-0 advantage on the Phoenix. Despite the gaudy hitting percentage, Green Bay hung around, although Valpo never relinquished the lead following a 4-0 spurt to break a 7-7 tie. A kill by senior Janelle Hobbs (Hartland, Wis./Arrowhead) gave Valpo set point at 24-20, and while Green Bay fought off two set points, a termination by senior Ellen Vanden Berg (Little Chute, Wis./Little Chute) eventually ended the opener in the Crusaders' favor.

Valpo trailed by seven points, 14-7, at the midway point of set two, and was still down by six points at 20-14. The Crusaders rallied with an 8-2 run, capped by a kill from sophomore Kelsey Berrington (Britton, Mich./Tecumseh), to tie the set at 22 apiece, the only tie score of the frame. But Green Bay scored the next two points to go ahead 24-22, and following a service error, the Phoenix got a kill from Mikaela Gunderson to send the match into the in-game break tied at one set apiece.

It looked like the third set would be all Valpo, as the Crusaders posted an early six-point spurt and led by seven points at 14-7. Much like in the previous set, however, the trailing team came all the way back, as the Phoenix went on a 10-2 run to claim a 17-16 lead. But with Green Bay still leading by one at 19-18, Valpo reeled off six straight points, including a pair of kills from junior Morgan Beil (St. Louis, Mo./Marquette), to earn a number of set point chances, and Beil came through with yet another kill on Valpo's second opportunity to give the Crusaders a 2-1 lead.

That lead at the end of set three would be Valpo's final lead of the match, however. The Phoenix never trailed in the fourth frame, and while Valpo used a late three-point spurt to close within 20-18, Green Bay scored five of the final six points to force a decisive fifth set. Then, the fifth set saw the Phoenix go on a 6-1 run to open the set and take the lead for good. Trailing 14-10, Valpo sided out on a Green Bay service error, got a kill from Vanden Berg and then a block from Vanden Berg and Hobbs to fight off three match points, but a service error - Valpo's 14th of the match - kept the Crusaders from completing the furious comeback.

Taylor Kasal led Green Bay (12-12, 7-4 Horizon) with a match-best 21 kills. Emily Riese dished out 58 assists and totaled 11 digs, while Jillian Bauer led all players with 32 digs. Gunderson was part of nine blocks as the Phoenix finished the match with 15 rejections.

Valparaiso (22-5, 8-2 Horizon) looks to get back on the winning track in its final home weekend of the regular season. The weekend starts Friday afternoon at 4 p.m. against Cleveland State, with live stats, audio and video available through ValpoAthletics.com.