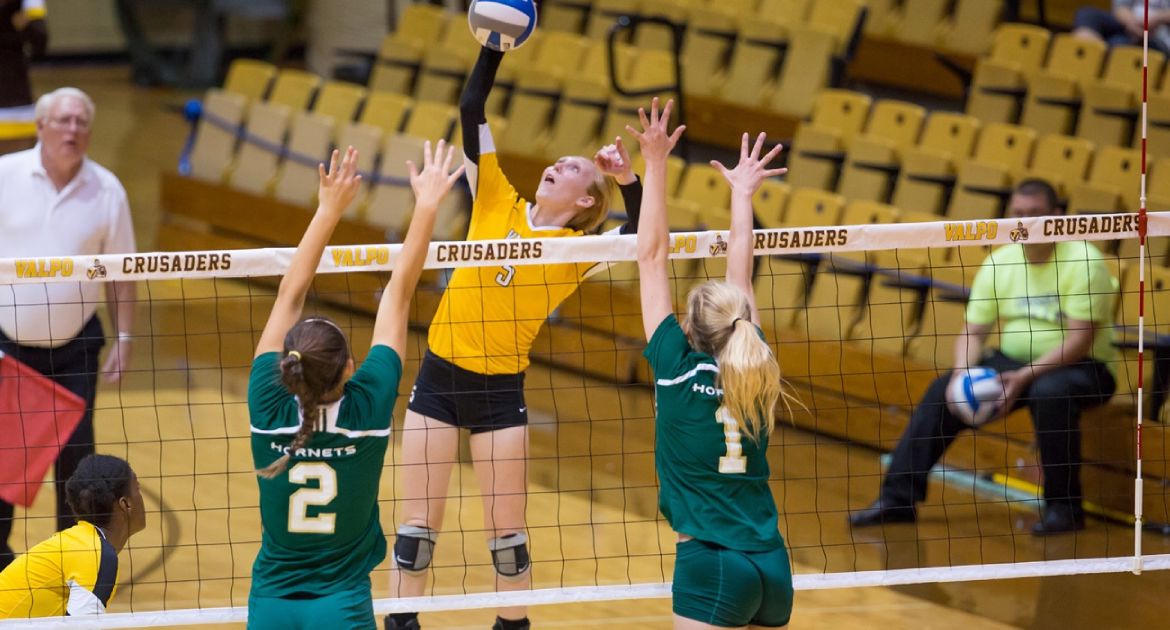 The Valparaiso volleyball team rebounded from Friday night’s loss in an emphatic way less than 24 hours, heading to Dayton for a 3-0 (25-16, 25-17, 25-21) sweep of Wright State on Saturday afternoon.

“It was good to be able to play again right away after last night,” said Crusader head coach Carin Avery.  “We came out and played steady, good volleyball today.  I’m very proud of Morgan Beil’s accomplishment this weekend, reaching 1,000 career kills – our hope this season is that she keeps climbing the charts, because if she continues to move up, we will win a lot more matches.”

Freshman Allison Ketcham (Mishawaka, Ind./Marian) led the way on both sides of the ball for the Crusaders.  Offensively, Ketcham registered kills on nearly half her swings, posting 16 kills on 33 attacks with just two errors – good for a .424 hitting percentage.  In the back row, the freshman recorded a team-best 14 digs.

Ketcham’s effort in the back row led a solid defensive performance by the Crusaders, as Wright State hit just .112 with 29 kills for the match.  Sophomore Morganne Longoria (Burlington, Wis./Burlington) added 12 digs while fellow sophomore Rachel Bruinsma (New Era, Mich./Western Michigan Christian) chipped in 10 digs as well as the Crusaders finished the match with 55 digs.

Valpo’s offense was the showcase in each of the first two sets, with hitting percentages above .350 in both the first and second frame.  The Crusaders totaled 16 kills in the opening set, four of which came during a key 7-1 run which pushed a 13-10 advantage to 20-11.  Then, in the second frame, Valpo tallied 15 kills against just two attack errors, including three kills from Ketcham in an early 6-0 spurt which gave the Crusaders the lead for good as they took a 2-0 lead into the in-game break.

The third set proved to be the Crusaders’ biggest battle on Saturday, as Wright State led most of the opening half.  Valpo claimed the lead and pushed it up to 18-14 on back-to-back kills from sophomore Jamie Lacheta (Warsaw, Ind./Warsaw), but the Raiders answered with four straight points to tie the set at 18-all.  After the teams traded sideouts, the Crusaders strung together four straight points, including a kill and a block by junior Nicole Lambert (St. Charles, Ill./East [Radford]) to go up 23-19.  WSU scored the next two points to close within two, but terminations by Lacheta and Ketcham closed out the Valpo sweep.

The Crusaders closed the match with 45 kills on .287 hitting, as junior Kelsey Berrington (Britton, Mich./Tecumseh) handed out 37 assists in the win.  It was a total team effort, as Ketcham was the only Crusader with more than five kills and seven Crusaders in all had at least three kills for the match.

Valparaiso (17-3, 4-2 Horizon) returns home to the ARC next weekend for a pair of matches, starting with a Horizon League matchup against UIC on Friday evening at 7 p.m.  The match can be seen live on the Horizon League Network and heard live on WVUR, 95.1 FM, Valparaiso, with links to the live video, audio and stats available at ValpoAthletics.com.