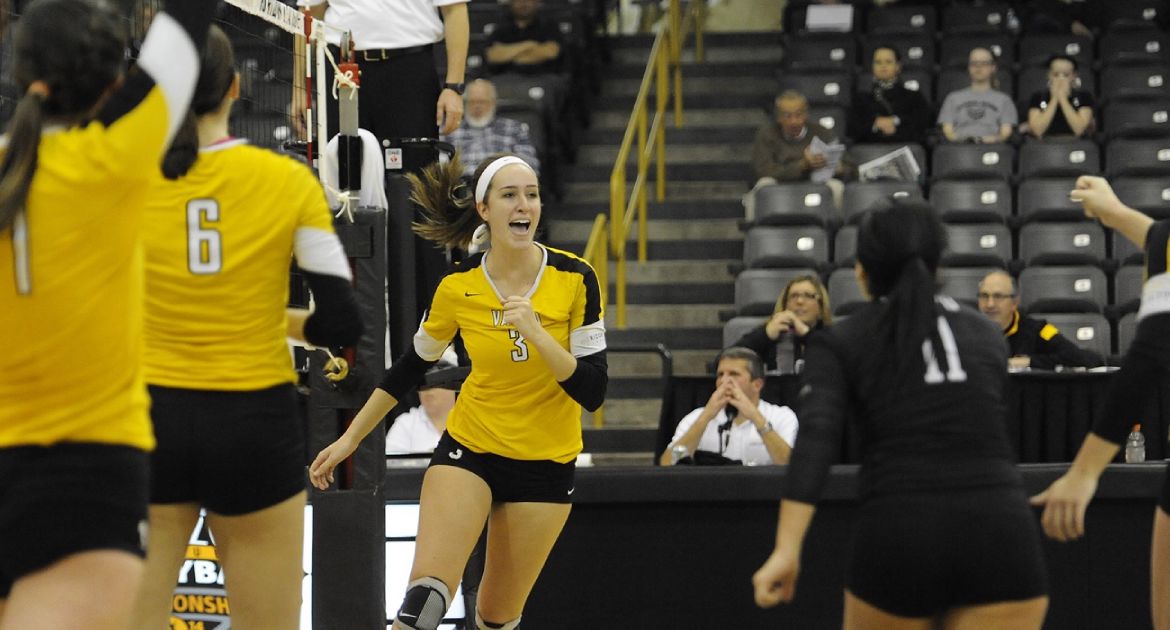 The third-seeded Valparaiso volleyball team was unable to get anything going in its Horizon League Championship semifinal match Saturday evening in Rochester, Mich., falling to second-seeded Milwaukee in straight sets (25-20, 25-10, 25-19).  The loss ends the Crusaders’ 2014 campaign with a 25-8 record.

The Crusaders led early in the first set, as a pair of early kills apiece from sophomore Emily Campbell (Grand Rapids, Mich./Forest Hills Central) and freshman Allison Ketcham (Mishawaka, Ind./Marian) helped stake Valpo to a 6-4 edge.  A 6-1 spurt a few points later gave Milwaukee a 12-9 lead, but a kill from Campbell and two Panther errors tied things up at 12-all.  But after the teams traded a pair of sideouts, Milwaukee went on a 5-1 run to go ahead 19-15, and the Crusaders would get no closer than three points the rest of the way.

Valpo fell victim to a quick start by the Panthers in the second set, as Milwaukee opened the frame scoring 14 of the first 17 points.  Out of the in-game break, the Crusaders led for most of the first part of the third set, with their latest advantage coming at 12-11 following a kill from junior Kelsey Berrington (Britton, Mich./Tecumseh).  Milwaukee scored the next six points, however, and the Crusaders were unable to string together consecutive points the rest of the way as the Panthers closed out the win – the only sweep Valpo suffered all season long.

Campbell led the Crusaders with 11 kills on .286 hitting, but was the only Valpo player with more than five kills, as Milwaukee out-killed the Crusaders 50-26 and out-hit them .352-.111.  Berrington was limited to a season-low 17 assists.  Sophomore Morganne Longoria (Burlington, Wis./Burlington) led Valpo with 12 digs, while senior Kelsey Victor (Logansport, Ind./Logansport) was in on three of the Crusaders’ four blocks.

Valpo ended the year with a 25-8 overall record, reaching the 20-win milestone for the 13th straight season and tying for the fifth-most wins in a single season in program history.  Campbell posted 480 kills on the year, tied with Angie Porche’s 2006 campaign for fifth-most in a season all-time at Valpo, while Berrington handed out 1,281 assists, which ranks ninth on the Crusader single-season charts.  Victor hit at a .307 clip for the season, the third-best individual single-season hitting percentage in program history, and led an offense which hit .250 as a team, breaking by 11 points the previous team single-season mark.  Victor also tallied 128 blocks to rank tenth on Valpo’s single-season chart.

The loss closes out the career of three Crusader seniors: Victor, Morgan Beil (St. Louis, Mo./Marquette) and Lindsey Hauch (Coloma, Mich./Coloma).  The trio has helped maintain the program’s standard of excellence throughout their careers.  Hauch finished her career with 755 total digs.  Beil, a three-time All-League honoree, ended her Crusader career hitting at a .277 clip, second-best all-time at Valpo, with 1,099 career kills – good for eighth on the Crusaders’ career chart.  Beil also tallied 310 career blocks, narrowly missing Valpo’s all-time top-ten in that category.  Victor, who earned All-League accolades as a senior, totaled 825 kills on .233 hitting for her career and was one of the top blockers in program history, finishing with more than 100 blocks in each of her final three years and registering 363 total blocks, eighth all-time at Valpo.