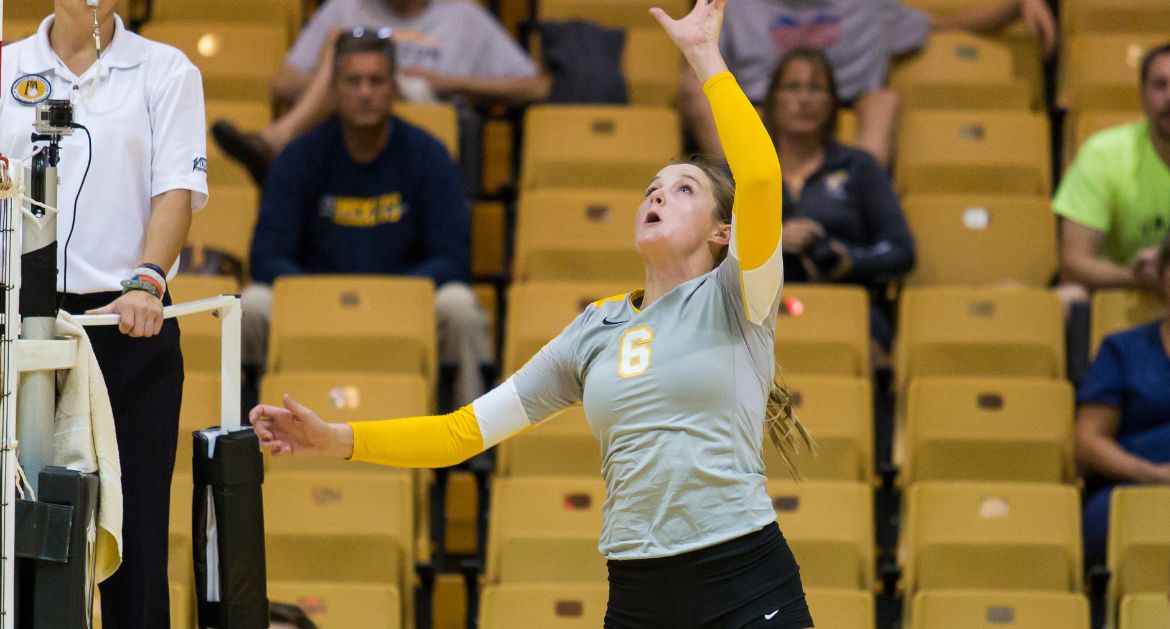 Defensively, sophomore Allison Ketcham (Mishawaka, Ind./Marian) filled in at libero for the second straight match and tallied a match high with 27 digs, setting a new career best. Ketcham was filling in as the league’s preseason Defensive Player of the Year – junior Morganne Longoria (Burlington, Wis./Burlington) – missed the match due to injury, the first time Valpo’s regular libero has missed a league match in over a decade.

Berrington and Carlson assisted the work on the back line with 11 digs apiece, as both players finished with double-doubles. At the net, Graboski and redshirt freshman Kayla Currier (Frankfort, Ill./Lincoln-Way East) each registered four blocks.

The first set was back and forth in the early stages, featuring 10 ties and five lead changes, but with the score 15-15, CSU would score 10 of the final 14 points to take the opener. Four consecutive points in the second set turned a 19-18 deficit into a 22-19 lead for the Crusaders before the Vikings scored three straight to even the frame. A pair of Campbell kills gave Valpo two set point chances, but CSU scored the next two to make it 24-24. Another kill from Campbell made it 25-24 Crusaders, and this time Valpo would come through, as Zaleski and Graboski combined on a block to send the match into the in-game break tied at one set apiece.

The third set would be all Valpo, as the Crusaders limited Cleveland State to eight kills on .061 hitting for the set. Trailing 5-4, Valpo went on an 8-1 run to gain control and would not let the Vikings closer than three points the rest of the way. But the fourth set would go the other way, as after leading 9-8, the Crusaders surrendered four straight points to CSU and would not be able to even up the frame again as Valpo went to a fifth set for just the third time this season.

Then, in the fifth set, the Crusaders were just unable to string together consecutive points, winning back-to-back points on just one occasions. Valpo did tie the set with CSU a number of times early on, but the Vikings took the lead for good at 7-6 to start a 4-1 spurt which opened breathing room as the Crusaders eventually fell.

Cleveland State (17-4, 6-1 Horizon) was paced by a match-high 28 kills from Grace Kauth, a new single-match high within the Horizon League this season. Gina Kilner handed out 49 assists, while Aaliyah Slappy recorded a match-best five blocks.

Valparaiso (17-5, 4-3 Horizon) looks to rebound quickly Saturday afternoon at Youngstown State. The match against the Penguins is slated for a 1 p.m. CT first serve and can be seen live on ESPN3.com, with live stats also available via ValpoAthletics.com.