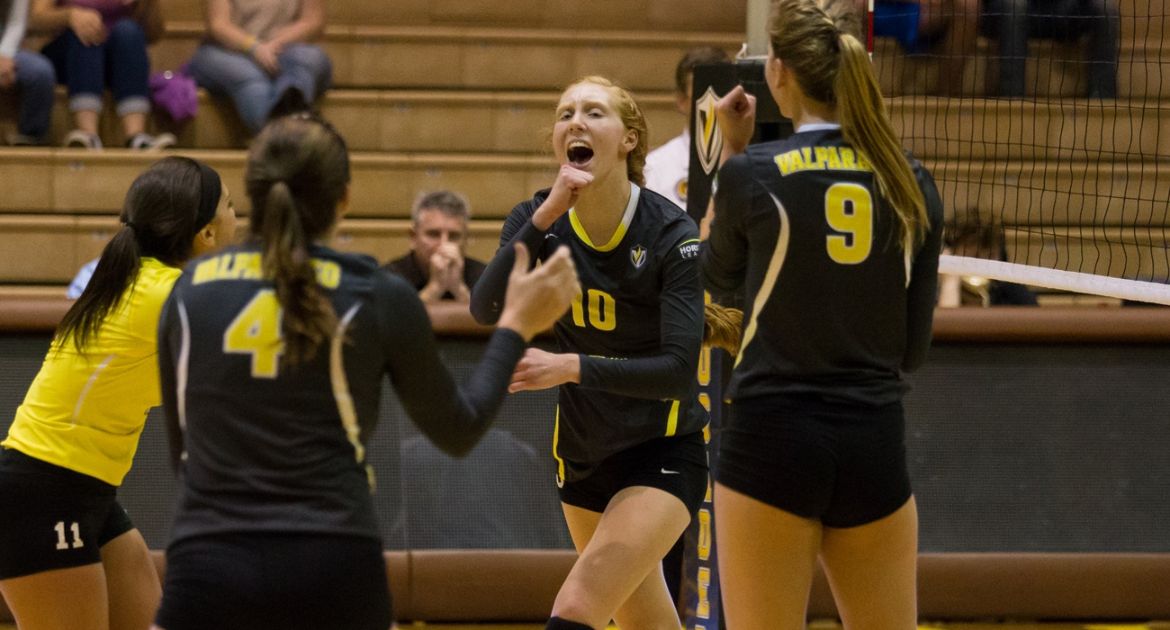 Crusaders look to secure spot in league standings down the stretch

This Week in Crusader Volleyball: Having already clinched a spot in the upcoming Horizon League Championship, the Valparaiso University volleyball team looks to secure its position in the league standings this week and even make a possible push for a top-two spot with two more road matches. The Crusaders look for revenge Friday night at Green Bay for a loss earlier this season, and close out the Wisconsin road swing at Milwaukee on Saturday afternoon.

Previously: Valpo swept a pair of road matches last week to kick off a four-match stretch away from home. The Crusaders made the short trek to UIC on Tuesday for an easy sweep of the Flames, and then rallied late in all three sets Saturday to earn a road sweep at defending Horizon League champion Oakland.

Head Coach Carin Avery: In her 14th season as head coach at Valparaiso, Carin Avery has won 334 matches and has led Valpo to three league regular season and tournament titles, as well as three NCAA Tournament appearances. A two-time league Coach of the Year, Avery has coached 40 All-League recipients over her tenure as Crusader head coach. She is Valpo’s all-time leader in both victories and winning percentage, and owns 389 career victories overall as a head coach.

Series Notes: Green Bay - Valpo owns a 23-11 advantage in the series with the Phoenix, but Green Bay earned a three-set victory at the ARC earlier this season. Jessica Wolf and Abby Jeffcoat combined for 31 kills for the Phoenix in that match, while the Crusaders were limited to .170 hitting.

Milwaukee - The Panthers hold a 23-17 edge in the all-time series with Valpo, but the Crusaders snapped a four-match losing streak to Milwaukee with an emphatic sweep earlier this season at the ARC. Valpo hit .343 with just nine attack errors in the match, led by 11 kills on .450 hitting and seven blocks from Taylor Graboski.

Scouting the Opposition: Green Bay – The Phoenix enter Friday night’s match at 15-11 overall and 6-7 in league play this year, splitting a road trip to Wright State and Northern Kentucky last weekend. The balanced Green Bay offense has six players averaging better than two kills per set, while Emily Riese hands out 10.55 assists/set. Jillian Bauer ranks among the nation’s best in the back row, recording 5.39 digs/set.

Milwaukee – The Panthers are looking to move back into the top-six of the league standings to earn a spot in the league tournament, as they are currently one-half game out of sixth at 5-8 in Horizon League play and 7-19 overall. Maggie Dunbar leads UWM with 3.11 kills/set on .246 hitting.

Road Warriors: The Crusaders will be looking for continued road success this week, something which has been a hallmark of the program the last couple years. This season, Valpo owns a 13-2 record in matches away from home – with the only two losses both coming in five-set affairs. This comes after last year’s squad got to 25 wins, thanks in large part to a 17-4 mark in matches away from home.

A Look at the League Standings: Entering the next-to-last weekend of regular season action, the Crusaders are sitting in third place with an 8-4 record in league play and hold a two-game edge in the loss column over fourth-place Northern Kentucky. Thanks to its win at Oakland last weekend, Valpo is only one game back of the Golden Grizzlies for the second spot in the standings and the corresponding bye into the semifinals of the Horizon League Championship.

Comeback Kids: The Crusaders stepped up when the points counted the most last Saturday at Oakland, coming from behind to win all three sets in the sweep of the Golden Grizzlies. Valpo trailed 21-20 in set one, 23-20 in set two and 22-17 in set three before rallying for the set win all three times. It had been quite some time since the Crusaders had completed a come-from-behind set win late, as the last time occurred way back on Sept. 26 at Wright State in the second set, overcoming a 22-20 deficit to win 27-25.

Among the Best Nationally: Valpo enters this weekend looking to improve on another already-impressive 22-6 record on the season, and has been strong all over the court. The Crusaders rank among the top-25 nationally as a team in four different statistical categories, highlighted by a sixth-place ranking in digs/set (17.56). Valpo also currently sits 13th in kills/set (14.35), 24th in service aces/set (1.61) and 25th in assists/set (13.21).

Reaching 20 Wins Again: The Valpo volleyball program has already extended an impressive streak this season, reaching the 20-win mark for the 14th straight season with its win over Wright State two weeks ago. Only 10 Division I volleyball programs have won at least 20 matches in each of the last 13 years (2002-2014), a group which includes Colorado State, Florida, Hawai'i, Nebraska, Ohio, Penn State, Stanford, UNI and Western Kentucky. Of the group, the Crusaders were the second to reach the mark this season, joining Western Kentucky.

Best Start in Program History: This year’s Crusader squad went deeper into the season than any other team in program history before suffering its first loss. Valpo’s win on Sept. 12 over Savannah State improved its record to 9-0, surpassing the 2003 and 2013 teams, both of which started the year 8-0 before losing for the first time. This year’s team also joins last year’s squad as the only teams to hold 15-2 marks 17 matches into the season.