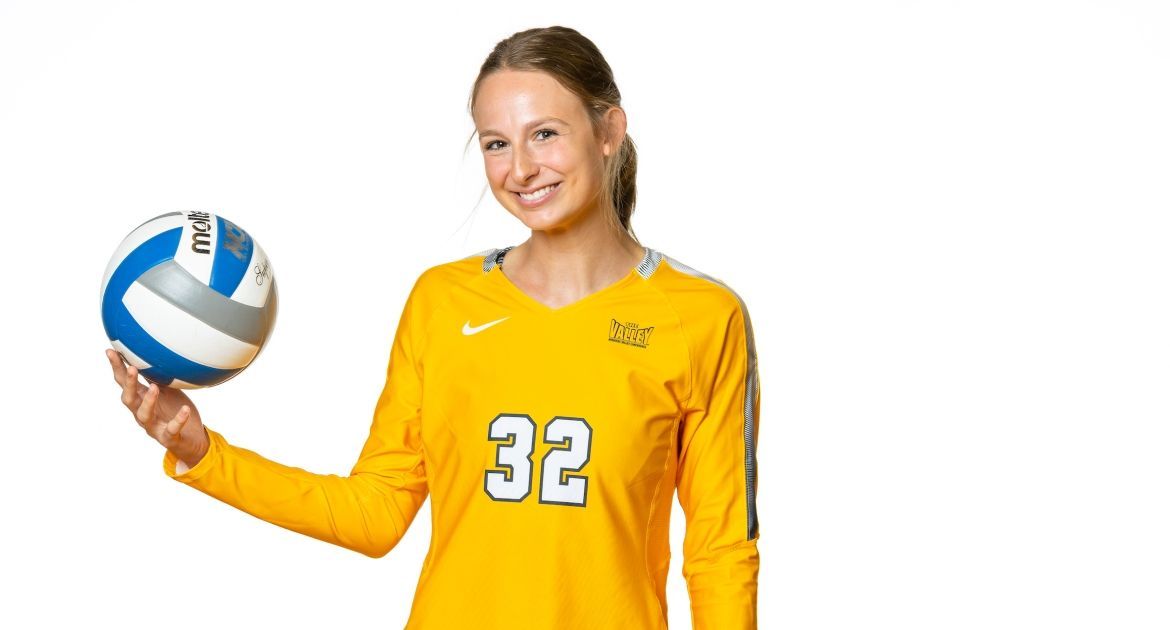 This Week in Valpo Volleyball: The Valpo volleyball team closes out pre-conference play this weekend at the SIUE Cougar Classic with a pair of matches, taking on Western Illinois in addition to the hosts. Both matches will be played on Friday as the Beacons wrap up their 11-match nonconference schedule.

Previously: Valpo posted a 2-1 record last weekend at Toledo’s Blue & Gold Tournament, tying the hosts and South Dakota State for the best record on the weekend. The Beacons swept Youngstown State and took down Toledo in a five-set thriller before falling to SDSU in a match which started 45 minutes after the Toledo match ended. Senior Jillie Grant represented Valpo on the All-Tournament Team.

Looking Ahead: MVC play opens next weekend for Valpo with the longest trip in the conference slate, as the Beacons play at Southern Illinois next Friday and at Missouri State next Saturday.

Following the Beacons: The match against host SIUE will be broadcast live on ESPN+. Links for the live video, as well as live stats for both matches, are available via ValpoAthletics.com.

Head Coach Carin Avery: In her 20th season as head coach at Valparaiso, Carin Avery has won 430 matches (430-209, .673) at the helm of the program and has led Valpo to three league regular season and tournament titles, as well as three NCAA Tournament appearances. A two-time league Coach of the Year, Avery has coached 55 All-League recipients over her tenure at Valpo. She is Valpo’s all-time leader in both victories and winning percentage, and owns a 485-233 (.675) record overall as a head coach.

Series History: Western Illinois - One of Valpo’s most common opponents of all time, the Beacons and WIU shared conference affiliation in the Mid-Continent Conference from 1992-2006 and then met in nonconference action four straight seasons last decade (2015-2018). Valpo holds a 31-6 advantage in the series and swept the Leathernecks in the last meeting as part of the 2018 Crusader Classic.

SIUE ­- Valpo and SIUE have met just twice on the volleyball court, with Valpo coming out victorious both times - most recently a 3-1 triumph at Evansville’s tournament in September 2013.

Scouting the Opposition: Western Illinois - The Leathernecks enter the weekend with a 1-8 record on the season, picking up their lone win of the season last weekend at Eastern Kentucky. Peyton Bowman leads the offense with 2.70 kills/set on .336 hitting, while Erika Moore owns a team-high 3.17 digs/set.

SIUE - The Cougars are currently 2-7 and are coming off an 0-3 weekend at the Colorado State tournament. Annie Ellis is averaging 1.21 blocks/set and is hitting at a team-best .262 clip offensively.

Digging Deep: Valpo continued its long tradition of strong back row play in the spring 2021 season, finishing the season ranked third nationally and second in the Valley with 20.37 digs/set. Valpo has ranked among the top-30 nationally in digs/set in each of the last 10 seasons, including leading the nation with 20.03 digs/set in 2017 to go along with a fourth-place rank in 2010 and a sixth-place finish in 2015. Since the move to 25-point scoring, only seven teams have averaged more than 20 digs/set over the course of a season, and Valpo is the only program to have done it twice. 2018 saw Valpo lead the nation with 2,613 total digs - a mark which set a program single-season record and a Division I record in the 25-point era. Through three weekends this year, Valpo sits 27th nationally in digs/set.

Bringing Home the Trophy: Valpo earned its first trophy of the season in the second weekend of play at Tennessee Tech’s Golden Eagle Invitational, going a perfect 3-0 to claim the tournament title. It was the 26th in-season tournament title for the program under head coach Carin Avery. The tournament title was the program’s first since the 2018 squad capped a stretch of three straight titles by defending its home court and winning the Crusader Classic.

Five Stars: For the fifth time this year, the Beacons faced a fifth set last weekend in their matchup against tournament host Toledo, and for the fifth time, Valpo came out victorious. Valpo has now won eight consecutive five-set matches dating back to last season, the longest-such streak in program history. Notably, Valpo was down 2-0 in two of those matches - UCSB and South Alabama - before rallying to win, and faced a match point in two of those matches - Tennessee Tech and South Alabama - as well.

Cookerly On the Verge: Fifth-year libero Rylee Cookerly enters this weekend on the verge of yet another myriad of milestones. The two-time MVC Libero of the Year entered this season 16th in NCAA history in career digs, but has already moved up to sixth on the all-time chart with 2,713 career digs - thanks in large part to three efforts of 30+ digs this season, two of which came last weekend against YSU and Toledo. Cookerly, who ranked 10th in the nation in digs/set last year, is just 39 digs shy of Taylor Root’s Valpo career record (fifth in NCAA history) and 65 digs away from Courtney Pence’s MVC career record (fourth in NCAA history). She is also just 67 digs shy of third and 78 from second on the NCAA all-time chart.

Anderson Reaches a Milestone: Not to be outdone, fifth-year setter Brittany Anderson reached a milestone of her own last weekend. After moving into third place in Valpo history in career assists the previous weekend at Tennessee Tech, Anderson surpassed 4,000 career assists in the Toledo match. With 4,032 career assists, Anderson is among the top-25 players in MVC history in the category.

Grant Stands Out: Playing mere minutes from her hometown last weekend, senior outside Jillie Grant had a strong weekend, averaging 3.30 kills and 3.30 digs per set, which culminated with her earning the first All-Tournament Team honor of her career. Grant’s weekend was highlighted by a big-time performance in the Beacon’s five-set thriller over Toledo, as she posted a match-high 22 kills - the third time in her career with 20+ kills - on .340 hitting and 14 digs. She also paced Valpo with nine kills and added 12 digs against South Dakota State as well.

More All-Tournament Honors: Grant became the fifth different Valpo player to earn All-Tournament Team accolades through the season’s first three weekends. In the second weekend of play at Tennessee Tech, fifth-year middle Peyton McCarthy was named Tournament MVP (and went on to be named MVC Player of the Week) and was joined on the All-Tournament Team by Anderson and sophomore setter Victoria Bulmahn. In the opening weekend at Milwaukee, McCarthy and senior middle Haley Hart earned spots on that All-Tournament Team.