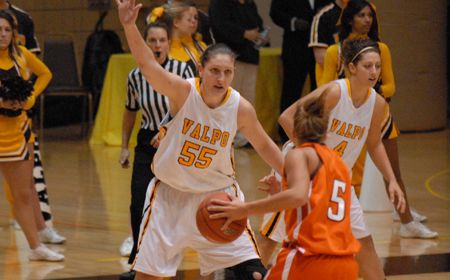 Playing in front of 1,374 fans, Valpo trailed by as many as 10 points in the first half, but rallied to within four at intermission, and took the lead for the first time with 18:21 remaining in the second half to defeat the Boilermakers for the first time ever.

“I’m really proud of our team and their persistence and courage to keep playing tonight,” head coach Keith Freeman said.  “You have to have courage to play in a game like that.  There are so many aspects we had to do right to have a chance to win.  Our kids stayed poised when the game got down to the wire.”

The Crusaders held Purdue (5-4) to just 31.3% shooting for the game, and just 28.1% during the final 20 minutes while forcing 19 Boilermaker turnovers.

Purdue jumped on top quickly, using a 9-1 run in under four minutes to take an early 16-6 lead with just under 12 minutes to play in the first half.  The Crusaders rebounded with seven straight points to cut the deficit to three just two minutes later and kept the deficit between two and seven until Aimee Litka’s (South Bend, Ind./Saint Joseph’s H.S.) lay-in at the 5:38 mark brought Valpo to within one, 22-21.

The visitors eventually rebuilt the lead to seven, 32-25, following Lakisha Freeman’s jumper with just 1:57 to play before halftime, but Litka’s triple that beat the halftime buzzer brought the Crusaders to within 34-30 at the intermission.

Purdue held Valpo to just 24.1% shooting (7-of-29) in the first half and outrebounded the Crusaders by 10, 28-18, but maintained just that four point advantage.

A triple by Litka followed by a jumper by Agnieszka Kulaga (Tarnow, Poland/I Liceum Ogolnoksztalcace H.S.) put the Brown and Gold on top for the first time at the 18:21 mark of the second half, 38-37.  The lead grew to as many as four, 44-40, five minutes later on a Launa Hochstetler (Berlin, Ohio/Hiland H.S.) jumper from the top of the key.

The Boilermakers showed why they are a top-25 team though, going on a 9-1 run capped by Danielle Campbell’s lay-in with 11 minutes to play to retake a four-point lead of their own.

Adjusting they did, fighting back to retake the lead 52-51 as Hochstetler split a pair of free throws at the 6:44 mark, only to see Purdue again retake the lead.  Litka hit a three-pointer with the shot clock winding down with 3:45 to play to tie the game, and, after the Boilermakers split one of two free throws, Zabielewicz put the Crusaders on top for good.

“Sylwia’s biggest impact was on the defensive end,” Freeman added.  “She made (Lindsay) Wisdom-Hylton shoot over her.”

Her basket started a 9-0 run that built an eight-point lead, 64-56, with 1:12 to play.  Whitney Farris (Kokomo, Ind./Kokomo H.S.) hit a jumper and made two free throws during the run, while Kulaga also hit a pair from the charity stripe.

“Whitney had a key putback for us tonight,” said Freeman.  “She played with a great deal of energy and passion.”

Valpo made 12-of-13 free throws in the final two-and-a-half minutes of the game to secure the upset.  The Crusaders made 30-of-39 free throws on the night compared with Purdue’s 16-of-22 shooting night from the charity stripe.

Kulaga finished with 17 points and eight rebounds for the Crusaders while Litka and Hochstetler had 13 points each.  Kulaga had a team-high eight rebounds while Zabielewicz, Litka, and Lauren Kenney (Mooresville, Ind./Mooresville H.S.) had seven boards each.

Brittany Rayburn led Purdue with 19 points while Freeman added 15 more for the visitors.  Wisdom-Hylton, a preseason All-Big Ten selection, added 10 points and 10 rebounds while Campbell had a game-high 13 boards, but fouled out with 10:26 to play after collecting four fouls in the first 10 minutes of the second half.

Purdue finished the game outrebounding Valpo by just one, 47-46.

Valparaiso (4-2) will host another ranked opponent in #8/8 Notre Dame on Saturday afternoon at the ARC.  Tip-off is set for 1:35 p.m. with the day designated as “Pack the ARC Day.”  The game can be seen live on Lakeshore Public Television, ESPN360 online, as well as the Horizon League Network.

Game Notes: This was the 14th meeting between the two instate foes, and Valpo’s first win ever in the series … this was just the fourth time ever Purdue played at Valpo … Hochstetler missed her first two free throws of the season, but still was 7-of-9 from the line and is 24-of-26 (92.3%) on the season … despite shooting just 32.1% Valpo outshot Purdue from the floor and has shot better from the floor than all six opponents this year … Hochstetler had four assists, tying Kathryn Knoester (2000-2004) for ninth all-time at Valpo with 257 for her career … Kulaga’s three assists giver her 202 for her career, moving her into a tie for 17th with Amy Cole (1987-1991) and Heidi Diefenthaler (1992-1996) … Kulaga’s eight boards were a season-high, as were Zabielewicz’s seven rebounds … Valpo defeated its second team receiving votes in the polls this season after downing Florida State on Nov. 29 … the Crusaders now host #8 Notre Dame and will travel to South Dakota State, who is currently receiving votes, in its next two games … Valpo is 73-20 (.785) at home since 2001-2002 … Valpo has now won four games over Big Ten teams (Northwestern, Michigan, Indiana) … Purdue was the preseason favorite this year in the Big Ten.