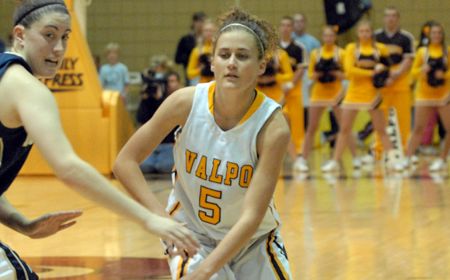 Valparaiso cut a 19-point deficit down to three with less than three minutes to play, but could not climb all the way back on Sunday afternoon as the Crusaders dropped their exhibition opener to Indianapolis 67-56 at the Athletics-Recreation Center.

Betsy Adams (Monticello, Ind./Twin Lakes H.S.) scored a game-high 27 points, making 5-of-12 from three-point range, including 18 points in the second half.

The Greyhounds took a 38-24 lead at halftime keyed by a 10-0 run late in the half that gave the visitors a 16-point advantage with 2:39 to play.  Indianapolis’ lead grew to 19, 45-26, two minutes into the second half before the Crusaders began their comeback.

A 13-2 run, including three triples by Adams, brought the Brown and Gold to within six, 51-45, with 10:20 to play.  Valpo continued to claw back, and Adams’ fifth three of the game made it 59-56 with 2:37 to play.  The Greyhounds scored the game’s final eight points though, all at the free throw line, to earn the exhibition victory.

“The second half we moved the ball better,” Freeman added.  “We need to establish an inside scoring presence and take care of the basketball better.”

Valparaiso will close out exhibition play on Monday, November 9, when the Crusaders host Indiana Wesleyan.  Tip-off is set for 7:05 p.m. at the ARC with the game shown live on the Horizon League Network.