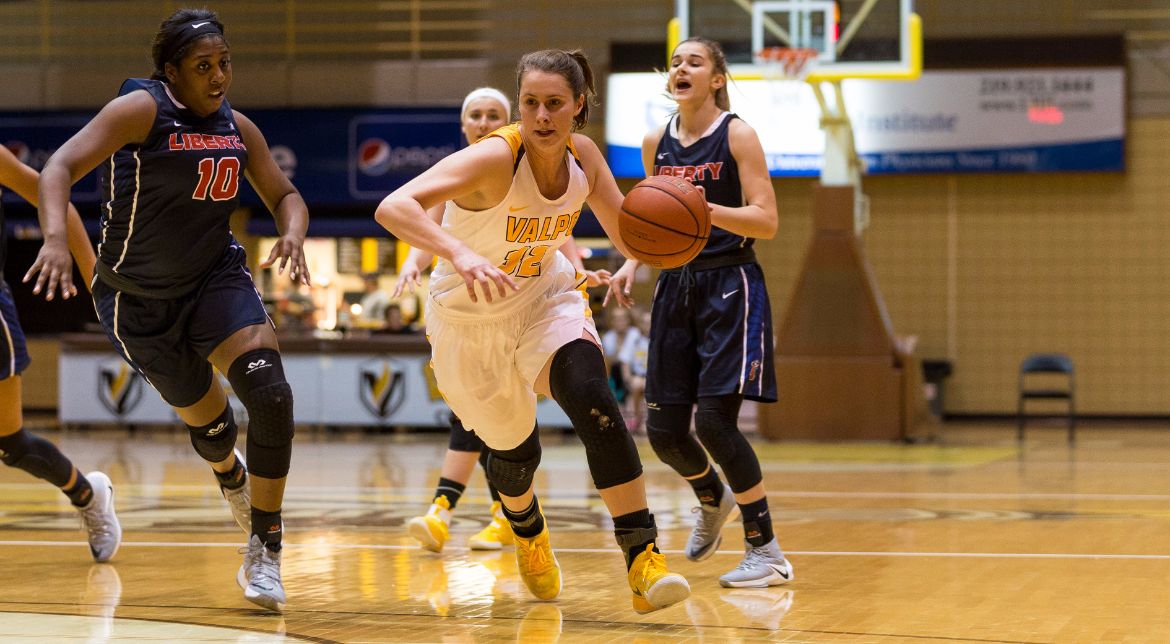 Dani Franklin leads the Horizon League in scoring. She had 29 points on Friday in a win over Liberty.
Evansville at Valparaiso | November 30, 2016
Related Links
Related Links

Next Up in Crusader Basketball: The Valparaiso University women’s basketball team seeks a third consecutive win as it welcomes Evansville to the Athletics-Recreation Center on Wednesday evening. With a victory, the Crusaders can get off to their first 4-2 start through six games since the 2008-09 season and start 3-0 at home for the first time since 2009-10.

Last Time Out: The Crusaders achieved their second buzzer-beating victory in a nine-day span when Amber Lindfors converted a layup at the horn to defeat Liberty 70-68 on Friday. Georgi Donchetz, who had knocked down two free throws to tie the game at 68, delivered a sideline inbounds pass to Lindfors in the lane to provide the assist on the game-winning basket.

Following the Crusaders: Wednesday’s game will be broadcast on ESPN3, WatchESPN and the ESPN app. It can also be heard on the flagship station for Valpo women’s basketball, 95.1 FM Valparaiso. David Horak will handle play-by-play, with Renee’ Turpa and Ben Ariano adding color commentary. Links to live video, audio and stats will be available on ValpoAthletics.com.

Head Coach Tracey Dorow: Tracey Dorow (36-92) is in her fifth season at the helm of the Valparaiso women’s basketball program in 2016-17. She collected her 250th career victory on Nov. 14, 2014 with a 91-57 win over Butler. In her first season, Dorow led the Crusaders to 11 victories, including five in Horizon League play. Dorow arrived in Valparaiso after 14 seasons at Ferris State. She compiled a 232-163 record while with the Bulldogs. Ferris State posted the No. 1 grade point average in all of Division II for the 1999-2000 women’s basketball season as well as the No. 2 ranking in 2002-03.

Series Notes: Valpo holds a 5-6 all-time mark against Evansville in a series that dates back to 1981-82. The Purple Aces pulled out a 69-67 win in the most recent meeting, which occurred in Evansville on Dec. 3, 2010 as part of the Aces Classic. Betsy Adams hit a game-tying 3-pointer with 22.6 seconds remaining, but Evansville’s Briyana Blair scored the game-winning basket with 1.1 seconds left. Valpo’s last win over Evansville was also the Purple Aces’ most recent trip to Valpo on Dec. 21, 1997. The Crusaders prevailed 74-64.

Inside the Purple Aces