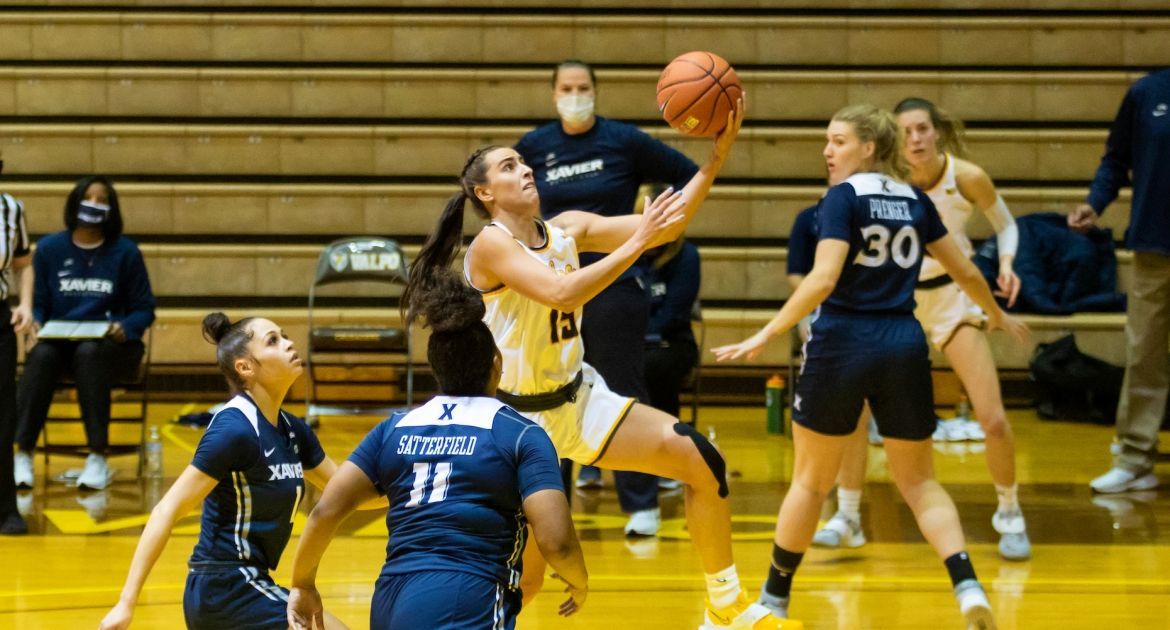 Carie Weinman drives to the basket for two of her 26 points Wednesday.
Xavier at Valparaiso | December 16, 2020
Related Links
Related Links

Another day, another win over a power conference program for the Valpo women’s basketball team, as the Brown and Gold used a big first-half run to take control against Big East foe Xavier Wednesday afternoon at the ARC and then held off a rally from the Musketeers down the stretch to win, 88-83, thanks in large part to a clutch 3-pointer from senior Caitlin Morrison (Glenview, Ill./Glenbrook South) in the final minute.

-        Valpo got off to a slow start offensively Wednesday, scoring just one field goal in the first six minutes of the contest as Xavier pulled out to a 14-2 lead.

-        But like flipping a switch, the offense got hot really quick. It started with a 3-point play from senior Grace White (Redby, Minn./Red Lake [Denver]) with 3:47 to play in the quarter, included five points by sophomore Cara VanKempen (Coopersville, Mich./Coopersville) and finished with five points in the final 45 seconds of the period from junior Shay Frederick (Greenville, Wis./Hortonville).

-        The quarter break did nothing to slow the offense down. Junior Carie Weinman (Glenview, Ill./Glenbrook South [Denver]) scored baskets on each of Valpo’s first three possessions in the second quarter to start a stretch of seven straight trips with baskets to open the period.

-        The lead remained in double digits for the remainder of the second quarter, with Valpo eventually carrying a 41-29 advantage into the locker room.

-        Xavier pulled to within eight points halfway through the third period, but five straight points from Weinman and a pair of free throws by White comprised a quick 7-0 spurt to push the lead back to 15 points. The advantage was 15 at the end of the period as well, 66-51, thanks to a Frederick layup at the buzzer.

-        But Valpo made sure Xavier never got the ball back with a chance to tie the game. After running down the shot clock on an iso play, Frederick found Morrison behind the 3-point line on the left wing and the senior buried the triple to push the lead back to six points with 33.2 seconds remaining.

-        Xavier would get no closer than four points the rest of the way, as White hit 3-of-4 from the foul line down the stretch to secure the victory.

-        Wednesday’s win was the first in program history over Xavier. The Musketeers had won each of the prior eight meetings between the two schools, including seven wins by double figures.

-        Xavier is just the second current Big East program that Valpo has defeated, joining Butler, which Valpo took down in November 2014 for its last win over a Big East school.

-        Three of Valpo’s four victories to date are over either Big Ten or Big East programs.

-        For the third straight game, it was Weinman leading the way in the scoring column, as she finished with a game-best 26 points — the second consecutive outing she has bested her previous best in a Valpo uniform.

-        The junior went 8-of-15 from the field and 8-of-10 from the foul line while also tying for team-high honors with five rebounds and adding a pair of steals.

-        Not to be outdone, White also set her new high in a Valpo uniform with 23 points. Most of White’s damage was done from the foul line, where she set a career best with 14 made free throws — tied for third-most in a game by an individual in program history and the most by a Valpo player since February 1995.

-        Morrison’s late triple pushed her into double figures for the second straight game, as she posted 12 points on 4-of-6 shooting. VanKempen added nine points off the bench as well.

-        Valpo shot easily a season best from the field Wednesday, going 26-of-47 (55.3%) from the floor. It was the team’s best shooting performance since connecting at a 57.7% clip in its road win at Evansville back in January.

“I thought we weren't really dialed in with what we were supposed to be doing early, and we gave Xavier a lot of easy baskets at the rim and were just late to help. During that early timeout, we talked a little about that, and I think our players refocused and did a great job getting stops.”

“We figured out pretty quickly that we were going to be able to attack them via dribble penetration. Our players did a wonderful job of working quickly on catches, attacking the rim and finishing layups and creating for each other. Our offense looked like what it can look like when we're all on the same page and we have an attacking mentality.

“Caitlin’s 3-pointer late was a huge play. For her to have the confidence to step up and take that shot in that situation was huge, and I think for her to understand that Shay was going to make that pass to her shows that her teammates are confident in her to take that shot.”

Valpo (4-2) closes out nonconference play on Sunday in search of its third victory over a Big Ten team this season, as it makes the trip to Madison, Wis. to face off with Wisconsin. The game can be seen live on BTN+ and heard live on WVUR (95.1 FM, Valparaiso).