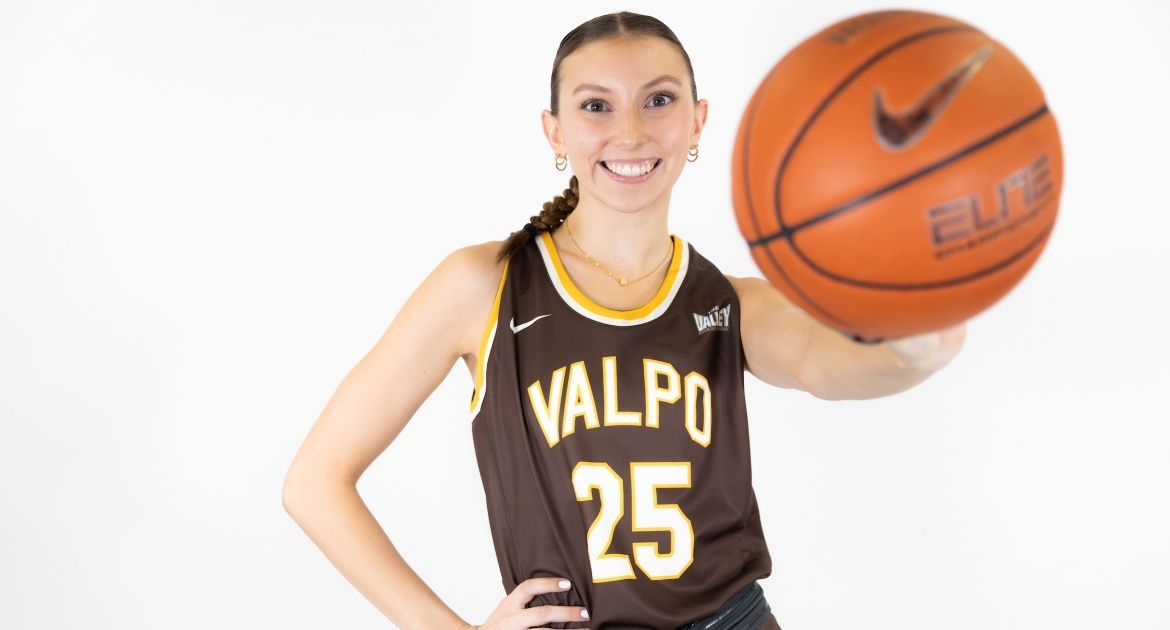 Next Up in Valpo Basketball: The Valpo women’s basketball team returns to the road for the first time in nearly three weeks on Sunday when it makes the short trip to Evanston to face Northwestern. The game is the first of two in non-conference play for the Beacons against Big Ten opponents.

Previously: Valpo suffered a heartbreaking loss on Monday in the finale of its three-game homestand, as visiting UAB scored in the final seconds of regulation to force overtime and then scored the game-winning basket with 3.3 seconds to play in the extra period as the Beacons fell, 83-81. Ali Saunders set a Valpo freshman record for single-game scoring, pouring in 32 points.

Head Coach Mary Evans: Mary Evans is in her fifth year at the helm of the program in 2022-23 and owns a record of 50-70. Evans has made an impact on the program in her first four years, raising the team’s level of play to be competitive in a strong Missouri Valley Conference. Evans’ preferred style of play has been a big part of the program’s turnaround, as Valpo has led the MVC in 3-pointers made per game in each of the last three seasons and in steals per game in two of the last three years.

Series Notes: Sunday marks the fourth meeting on the hardwood all-time between Valpo and Northwestern. Valpo won the first matchup in the series at the ARC in 2005, but the Wildcats have claimed wins in both meetings in Evanston - most recently a 69-48 Northwestern win on Nov. 21, 2019. Grace White led Valpo with 15 points off the bench in that game, while Marlee Profitt delivered 10 points.

...versus UAB
- Valpo led throughout the second half until UAB got a basket with 33 seconds to play from Denim DeShields to tie the score at 66-66.
- Valpo ran the shot clock down on its possession and then turned to junior Leah Earnest, who deftly finished at the rim with 7.3 seconds to go to restore the two-point Beacon lead. But UAB called a timeout, advancing the ball, and got a layup of its own by Maria Roters with 2.8 seconds to play to send the game to overtime tied at 68.
- The start of overtime was all UAB, as the Blazers scored 10 points over their first five possessions to lead 78-71.
- Ali Saunders remained aggressive, driving to the rim on Valpo’s next trip to make it a five-point game. Then, following a UAB miss, Earnest was able to finish inside to cut the Blazer lead to 78-75 with 1:31 to go in overtime.
- A baseline jumper with just over a minute to play restored the Blazers’ five-point edge before Saunders scored a third-chance bucket to move Valpo within three.
- UAB missed two free throws on its next trip, followed by another inside basket by Saunders, and then split a pair with 17 seconds to go to give the Beacons the ball in a two-point game, setting the stage for the final 10 seconds.
- Saunders again finished with just over eight seconds to play to tie the game, but UAB rushed the ball up the court and Roters scored with 3.3 seconds remaining for the game-winning points.
- Saunders scored 32 points on 12-of-18 shooting from the field, setting a Valpo freshman record for points in a game.
- Earnest scored 13 points and led all players with 13 rebounds, while Olivia Sims matched her career best with 12 points.
- Valpo out-shot UAB on the evening, 47.5%-43.5%, but the Beacons hit just 6-of-21 from 3-point range.
- Valpo did out-rebound its opponent for the first time this year, besting the Blazers on the glass by a 44-36 margin, and out-scored UAB in the paint, 46-42.

...versus Eastern Illinois
- Valpo led by 10 in the first quarter, but the Panthers erased the deficit and used a 12-0 run to take the lead in the second quarter. EIU eventually led 36-35 at intermission.
- Neither team enjoyed more than a three-point lead in the third quarter and the teams were tied at 52-52 entering the fourth period.
- Valpo led 57-54 following a triple by senior Olivia Brown with 8:31 to play in the game. The Beacons went scoreless on their next four trips, as EIU scored six in a row to take the lead for good.
- Valpo had a shot to tie with 1:38 to play, but was unable to connect.
- The loss snapped an eight-game winning streak for Valpo in the series with EIU.
- The Beacons shot just 37.7% from the field on Wednesday. They did knock down 10 3-pointers and went 11-of-12 (91.7%) from the foul line.
- Wednesday marked just the second time in the last four seasons that Valpo has lost after holding a double-digit lead at some point during the contest.
- Brown paced the Beacons on Wednesday with a team-best 20 points, one off her high in the Valpo uniform. She also grabbed six rebounds, five of which came on the offensive end, and led the Beacons with four assists.

...looking ahead
- The Beacons return home to the ARC for their next two games, welcoming a pair of MAC opponents: Bowling Green (Dec. 2) and Western Michigan (Dec. 7).
- Valpo’s final game before a break for final exams will be a road test at Western Michigan Dec. 9.

...on the road
- Monday’s game is the second of 14 true road games for Valpo this season, four of which will come in non-conference play.
- The Beacons won their first road game of the season, the season-opening 71-64 win at Central Michigan, and were 5-11 in true road games last season.

@nuwbball
- Northwestern enters Sunday’s game with a 3-2 record on the season, most recently defeating Niagara 76-38 on Tuesday.
- The Wildcats have faced one MVC team this year, beating Southern Illinois 84-69.
- Caileigh Walsh is averaging a team-best 12.6 ppg through five games.

A New Rookie Standard
- Freshman Ali Saunders set a new mark for Valpo rookies as she scored 32 points on Monday against UAB.
- The previous freshman record is unknown, but there have now been 16 games in program history a Valpo player has scored 32 or more points, and none of the previous 15 came from a rookie.
- As of Tuesday, Saunders is one of only three D-I freshmen to score 32 or more points in a game this season, joining Minnesota’s Mara Braun and Florida State’s Ta’Niya Latson.
- Saunders posted the highest-scoring game by any Valpo player since Dani Franklin dropped 33 points against Eastern Illinois on Dec. 3, 2016.
- Saunders tallied her 32 points Monday evening in efficient fashion, going 12-of-18 from the floor, including 2-of-3 from 3-point range, and 6-of-7 from the foul line. She was just one point and one field goal shy of cracking Valpo’s single-game top-10 in the respective categories.

What a Start to Her Career
- Saunders’ 32-point performance might be the highlight so far, but it’s been a strong start to the freshman’s collegiate career, as she has been in double figures in all four games - 10 at Central Michigan, 11 versus Southern Miss and 12 against Eastern Illinois.
- She is the first Valpo freshman since 2014-15 to open her career with at least two straight double-figure scoring efforts. That year, Dani Franklin scored in double figures in each of the first six games of her career.
- 65 points through four games is the most prolific start to a Valpo freshman’s career since Sarrah Stricklett combined for 69 points in her first four games as a rookie in 1996-97.

Earnest Hits the Boards
- Leah Earnest has had a strong start to the season scoring the basketball, but more notably, hitting the glass and rebounding.
- Earnest, who had reached double figures in rebounding twice in her first two seasons, has already done so three times this year - 10 at Central Michigan, 14 versus Eastern Illinois and 13 last time out against UAB.
- The 14 rebounds vs. EIU were the most by a Valpo player since Dani Franklin grabbed 16 against Indiana State on Jan. 28, 2018.
- Earnest now owns the top-two individual rebounding efforts in head coach Mary Evans’ tenure with her last two games.
- Earnest is the first Valpo player to secure at least 27 combined rebounds in consecutive games since Amber Lindfors grabbed 17 boards against Northern Kentucky and 12 against Oakland in February 2017.
- Through four games, Earnest’s average of 11.7 rebounds/game is tops in the MVC and ranks among the top-20 nationally.

Doubling Up
- Earnest has also been consistently on the scoresheet, going for a career-best 20 points at CMU, 12 points against Southern Miss, 11 points versus Eastern Illinois and 13 points last time out against UAB.
- She has been impressively prolific inside the arc, hitting 76.0% (19-of-25) from 2-point range - among the top-50 nationally.
- Combining her scoring and rebounding, Earnest has registered three double-doubles through the season’s first four games after recording just two combined in her first two seasons.
- Earnest is believed to be the first player in program history to tally three double-doubles in the first four games of a season.
- Earnest already has as many double-doubles this season as the entire Valpo team did last season - in fact, Valpo has not tallied more than three double-doubles as a team in any of the last three years.

Facing the B1G
- Mary Evans has not been shy about having her team take on Big Ten opponents since taking the helm of the Valpo program prior to the 2018-19 season.
- This year, Valpo has a pair of non-conference matchups at Big Ten teams, facing Northwestern and Wisconsin.
- Counting this season’s games, the Beacons will have faced nine Big Ten opponents in Evans’ five seasons - Illinois, Northwestern and Wisconsin twice apiece, as well as Ohio State, Purdue and Michigan State once each.
- Back in 2020-21, Valpo claimed a pair of Big Ten road wins with victories at Illinois and at Purdue, and came within an overtime decision of winning at Wisconsin that season as well.