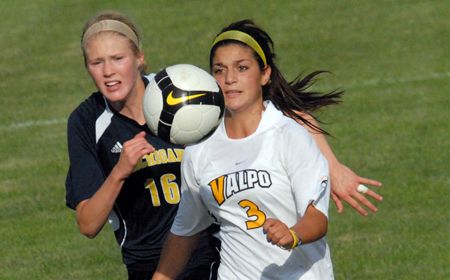 Luisa Desario is the Horizon League Athlete of the Week. (Ray Acevedo)

Valparaiso University freshman Luisa Desario (Bartlett, Ill./Bartlett H.S.) has been named the Horizon League’s Player of the Week after helping lead the Crusaders to a 1-1 mark at the Boilermaker Challenge Cup.

Desario scored her first two collegiate goals in the first match against Ball State on Thursday afternoon.  Her first tally came less than 20 minutes into the match, scoring from 15 yards out in the middle of the box to put Valpo up 1-0.  She then tied the match at two with a goal with just over 20 minutes remaining, as she took a long lead pass and beat the Cardinal goalkeeper one-on-one.  Valpo went on to win 3-2.

Desario and the Crusaders then battled 14th-ranked Purdue to a 1-0 loss on Saturday afternoon to wrap up play at the tournament.

For the season, Desario is tied for second in the Horizon League with her two goals, is tied for sixth with four points, and is third in the conference with 17 shot attempts.

Valpo (2-4) will return to action on Friday morning as the Crusaders face Central Michigan in a 10:30 a.m. CDT contest in Mount Pleasant, Mich.