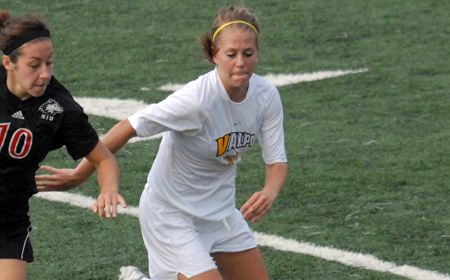 This Week in Crusader Soccer: Valparaiso takes its final road trip of the 2009 regular season this weekend when the Brown and Gold head to Ohio for a pair of key Horizon League contests.  Friday the Crusaders play at Youngstown State while on Sunday Valpo faces Cleveland State.

On the Air: Neither match this weekend will have an audio broadcast on the radio or online.  Friday’s match at  Youngstown State can be viewed live online through the Horizon League Network by going to www.valpoathletics.com.  Live stats will be provided through www.valpoathletics.com for both matches this week as well.

Head Coach John Marovich: John Marovich is 15-14-4 in his second season overall and with Valpo.  Just the third coach in program history, he has moved into second place all-time in victories for the Crusaders.

Series Notes: Valparaiso and Youngstown State are meeting for the ninth time dating back to 1999 with Valpo holding a 7-0-1 all-time series advantage.  Last year the Crusaders won 2-1 during the regular season before the two teams battled to a scoreless draw on October 29 in the Horizon League Tournament.  The Penguins ultimately advanced on penalty kicks 5-4.  The Crusaders and Cleveland State are meeting for the sixth time since 2004 with Valpo winning the first five meetings.  Last year the Brown and Gold posted a 2-0 shutout over the Vikings at Eastgate Field on October 19.

Wrapping Up Last Week’s Action: Valpo had an offensive explosion last weekend, scoring six goals in two matches.  Friday against Indiana State, the Crusaders and Sycamores battled to a 3-3 double-overtime draw.  Catherine Terrell, Becky Clever, and Jackie Kondratko all scored for the Crusaders in a match in which Indiana State tied with just under 10 minutes to play in regulation.  On Sunday against Detroit, Luisa Desario scored the match-winner 2:30 into overtime as the Crusaders downed the Titans 3-2.  Kondratko and Jessie White also had goals for Valpo.

Scouting Cleveland State: The Vikings have dropped two straight following a 5-1 loss at Green Bay on Sunday.  Marley  Greiner leads the Cleveland State offense with three goals and two assists while Natalie Daniels is the only other Viking with more than one goal.  Between the posts, Kelly Zinkiewich has posted a 2.62 goals against average on the year.

Move Overtime Fun: Valpo is 14-14-20 all-time in 48 overtime matches in the program’s history.

Finding the Offense: Valpo scored three goals in both matches last weekend, the first time since September 24 and 29 against Evansville and Youngstown State the Crusaders had tallied that many markers in back-to-back contests.  In the previous 12 matches this season, Valpo had only scored 10 total goals before posting six last weekend.

Battling for Tournament Positioning: With a new format to the Horizon League Tournament this year, only the top six teams on the conference qualify for the postseason event.  Valpo currently sits sixth with two weekends remaining, two points ahead of Cleveland State.  The Brown and Gold is also just three points out of second, which gets a first round bye, and two points out of fourth, which hosts a first round match.

Lots of Firsts: Catherine Terrell scored her first career goal to tie the match with Indiana State at one.  The freshman’s goal was also her first collegiate points.  Sophomores Tracy Roos and Sarah Melhorn each had their first career assists on Sunday in the win against Detroit.  Roos had the helper on the match-winner in overtime.  Becky Clever registered her first goal of the season againts Indiana State while Jessie White had her first goal of the year against Detroit.

Scoring Leaders: Sarah Jewell, Jackie Kondratko, and Jessie White are all in the top-10 on Valpo’s career points list.  Jewell ranks eighth with 31 while Kondratko just moved into ninth place this past weekend with 25.  White is tied for 10th following her goal against Detroit and now has 23 points.

Shots are Key: Valpo is 5-1-1 this season when outshooting its opponents compared with an 0-7 record when being outshot.

Cabral All-Time Goals Against Average Leader: Mele Cabral qualified for Valpo’s all-time goals against average list earlier this season when she surpassed 2,500 career minutes in goal.  The senior’s 1.00 career mark moves her in front of Erin Murray (2004-2007) for the top spot.  Murray previously held the record with a 1.19 career goals against mark.  Cabral ranks third all-time at Valpo in minutes played as well.

Lots of Shots: Jackie Kondratko and Sarah Jewell both rank among the top-10 in school history in shot attempts.  Kondratko just moved past Allison Swanson (2002-2005) into seventh place with 104 shots in her four years with Valpo.  Jewell is now ninth, four shots behind Erin Crowgey (1997-200), with 88.  Jessie White is also on the verge of moving into the top-10 on the career list.  She has 82 career shots, two away from matching Kerry Donoho (1994-1997) on the charts.