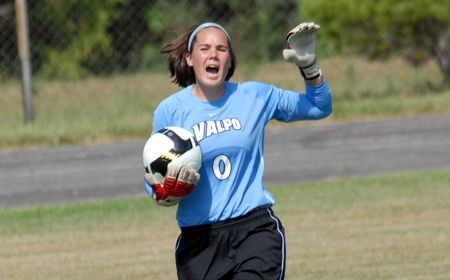 This Week in Crusader Soccer: Valparaiso begins postseason play at Eastgate Field on Sunday afternoon as the third-seeded Crusaders host number six seed Green Bay in the quarterfinals of the Horizon League Tournament.  Valpo enters with a five-match winning streak overall, and is unbeaten in its last six contests.

Head Coach John Marovich: John Marovich is 19-14-4 in his second season overall and with Valpo.  Just the third coach in program history, he has moved into second place all-time in victories for the Crusaders.

Series Notes: Valparaiso and Green Bay are meeting for the 12th time in a series that dates back to 1993, the inaugural season for Crusader soccer.  The Phoenix lead 8-2-1 all-time, but Valpo is 2-0-1 against Green Bay in the last three meetings.  On September 25 of this season at Eastgate Field, the Brown and Gold notched a 2-0 victory on goals by Rachel Hoaglin and Luisa Desario.

Wrapping Up Last Week’s Action: Valparaiso closed out the regular season last weekend with a pair of 2-0 wins to run its winning streak to five.  On Friday the Crusaders got goals from Jackie Kondratko and Rachel Hoaglin on the way to a Horizon League victory over Butler.  Sarah Jewell scored her first goal of the season on Sunday and Hoaglin added another tally as the regular season came to a close with a Senior Day win over IPFW.  Mele Cabral earned shutout wins in goal in both matches to increase her season total to seven.

Scouting Green Bay: The Phoenix enter the tournament having dropped a 4-1 match on Monday night against Milwaukee to close out the regular season.  Nicole Dooher leads Green Bay with nine points and four goals on the year while Devahn Godfrey also scored four times.  Corey Arno and Lauren Somers each added three goals this season.  Maddie Drusch led the Phoenix in goal this season, posting a 1.40 goals against average and an .805 save percentage.  The sophomore netminder tallied three shutouts as well.

Valpo in the Horizon League Tournament: The Crusaders enter this year’s tournament as the third seed, Valpo’s highest mark ever entering postseason play since joining the conference.  The Brown and Gold is still looking for its first Horizon League Tournament victory though, having fallen at Butler 2-0 in 2007 and battling Youngstown State to a 0-0 draw in 2008 before the Penguins advanced on penalty kicks.  Valpo hosted Youngstown State in the first round match last year, so this will be the Crusaders’ second home tournament contest of all-time.

Guaranteed to Finish .500: Valparaiso has assured itself of its sixth straight winning season and will look for its sixth straight 10-win season against Green Bay.  With a victory the Crusaders would tie the third most victories in school history.

Freshmen Scoring Duo: Rookies Rachel Hoaglin and Luisa Desario have paced the Valpo offensive attack this season.  Hoaglin has a team-leading 19 points, including a team-best seven goals and five assists.  She ranks third in the conference in goals and points and fourth in assists.  Desario is fifth in the Horizon League with six goals this year and has 14 total points.  Each of the freshmen has two match-winning goals this year as well.

Home Field Dominance: Valpo is 34-12-3 at home at Eastgate Field since the start of the 2004 season.  The Crusaders went 4-2-1 at Eastgate this season on the way to a 5-3-1 overall home record including the matches at Brown Field.

All-Time Scoring Leaders: Sarah Jewell, Jackie Kondratko, and Jessie White are all in the top-10 on Valpo’s career points list.  Jewell just moved into seventh place with 33 while Kondratko is ninth with 29.  White is ranks 10th with 24 points.

Cabral All-Time Goals Against Average Leader: Mele Cabral qualified for Valpo’s all-time goals against average list earlier this season when she surpassed 2,500 career minutes in goal.  The senior’s 0.91 career mark moves her in front of Erin Murray (2004-2007) for the top spot.  Murray previously held the record with a 1.19 career goals against mark.

Lots of Games: Jessie White has moved into the top-10 all-time in matches played.  She enters the tournament with 75 career appearances at Valpo.

Moving Up the Team Leaderboard: Valpo’s 24 goals and 69 points this season ranks as the fifth best single season performances by a Crusader team in school history.  The team’s 21 assists is fourth best as well.  Defensively, 23 goals allowed and a 1.25 team goals against average ranks fourth on the single season charts while the team’s seven shutouts are third best.

More Single Season Top Fives: Mele Cabral’s seven clean sheets on the season rank second all-time for the Crusaders behind her 10 shutouts last year.  In addition, Rachel Hoaglin’s five assists this year tie her for third on the charts while her 19 points are fifth best for a single season.  Jackie Kondratko also is tied for fifth on the yearly list with three match-winning goals.

Exceeding Expectations: The head coaches selected Valparaiso to finish sixth in the Horizon League this year in the annual preseason poll.  The Crusaders finished the year three spots better than the prognosticators though, finishing third for the year.